Volvo Construction Equipment Builds a Road Through the Desert 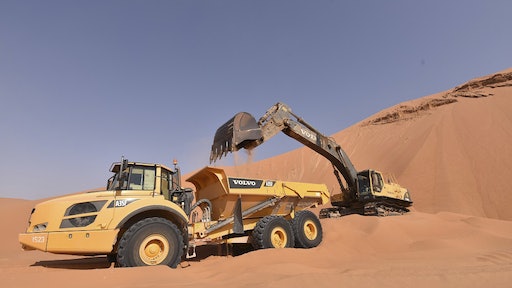 In 2010, Al-Rosan Contracting was one of the contractors hired to build the first ever road connecting the Kingdom of Saudi Arabia and the Sultanate of Oman, consisting of a 322-mile-long highway, built using Volvo Construction Equipment (Volvo CE) machines. The longest part of the road which Al-Rosan Contracting was commissioned to build (159 miles) comprises a single-lane carriageways and in sections where there are steep inclines, secondary lanes are added for trucks and slower-moving traffic.

The Rub’ al Khali desert, also known as The Empty Quarter or the ‘quarter of emptiness’, is the largest and most barren sand desert in the world, spreading itself over four Arab nations and covering 232 square miles. This includes, the Kingdom of Saudi Arabia, areas of the Sultanate of Oman, the United Arab Emirates and Yemen – most of the southern third of the Arabian Peninsula, which is comparable in size to France. The terrain is covered with steep sand dunes with heights up to an incredible 820 feet.

“The entire project was a challenge from day one whether it was the climatic conditions, topography of the area, the distance from the nearest inhabited city or availability of spare parts, logistics and services,” said Fahad Hazza Aba Alros, general manager of Al-Rosan Contracting.

Trying to build a road on shifting sand dunes was always going to be difficult. The project involved building sand bridges across salt flats and high rising dunes, so the selection of adaptable and reliable equipment was critical for this project, not least because of the aggressive environment, intense heat, sand and remoteness of the site.

The construction of the 159-mile road was completed in sections and involved gigantic amounts of sand ‘cut and fill’. The sand transported to construct the bridge was 130 million cubic meters – the equivalent of 26 giant pyramids – and 12 million cubic meters of material was needed to protect the embankment of sand from wind and water.

The equipment was ordered throughout several stages of the project, totalling 95 Volvo machines, including a range of articulated haulers, excavators and motor graders. As the project progressed, a lead excavation team tackled the dunes while aiding the excavation and building of the raised surface and foundations for the road.

Hundreds of drivers, excavator operators, technicians and auxiliary workers – almost 600 in total – were employed over the three-year project. They lived in self-contained camps strategically designed with facilities to support this unique development. The remote location, 621 miles  away from the capital Riyadh, presented the service and maintenance teams with a demanding schedule. This was manifested by the extreme desert temperatures, reaching 122oF degrees in the day and dropping to below 34oF at night.

Every day the construction team worked 14-hour shifts excavating and depositing sand that was then compacted using naturally salty ground water. The time constraints of this project depended on the Volvo machines working relentlessly.

The road was successfully completed and will establish a vital connection between the two Arabian Peninsula neighbors. It’s set to have a huge beneficial impact for people and businesses traveling between Saudi Arabia and Oman, as the direct route through the desert will reduce journey times dramatically.

Video: Volvo Equipment Builds a Road Through The Empty Quarter

Here are some tips on how to handle unfair online reviews.
Nick Howell
April 21, 2021