The federal spending category subtracted more than half a percentage point, which means the non-federal portion of the economy expanded faster than 3% 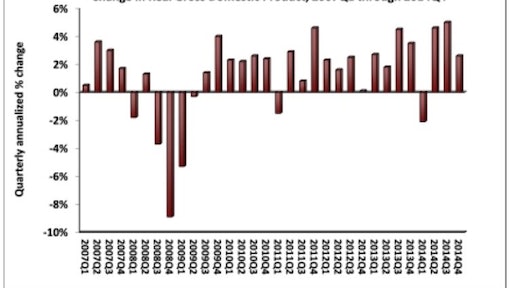 Real gross domestic product (GDP) expanded 2.6% during the fourth quarter of 2014, following a 5% increase in the third quarter.

Real gross domestic product (GDP) expanded 2.6 percent (seasonally adjusted annual rate) during the fourth quarter of 2014, following a 5 percent increase in the third quarter, according to the Bureau of Economic Analysis January 30 release. Nonresidential fixed investment grew by only 1.9 percent after expanding 8.9 percent in the third quarter. Investment in equipment declined 1.9 percent, while investment in nonresidential structures increased 2.6 percent.

"Today's headline GDP number will be broadly viewed as disappointing as many economists had expected to see a quarterly number in excess of 3 percent," said Associated Builders and Contractors Chief Economist Anirban Basu. "However, it is important to note that the federal spending category subtracted more than half a percentage point, which means the non-federal portion of the economy expanded faster than 3 percent.

"In addition to the impact of federal spending which shrank farther than expected, it is also worth noting that spending on nonresidential structures continues to climb," said Basu. "With the economic recovery persisting and with job growth accelerating, business confidence has generally been on the rise, translating into shrinking office and retail vacancy rates and rising hotel occupancy rates. All of this creates a context in which nonresidential construction spending, particularly private construction spending, is likely to expand, which is consistent with ABC's view that the nonresidential construction recovery will continue.

"Though today's release indicates that the economy enters 2015 with somewhat less momentum than had been thought, the fact of the matter is that the past nine months represents the strongest period of growth in the current recovery cycle," said Basu. "Undoubtedly, financial markets will continue to be roiled by ongoing fluctuations in input prices and uncertainties regarding the strengthening of the U.S. dollar. But with gas prices low and with job creation now brisk, consumers are likely to continue to push the U.S. economy forward in 2015."

The following segments expanded during the fourth quarter and/or contributed to GDP.

A number of key segments did not experience growth for the quarter.

Total construction spending was down 0.8% in February 2021 but has gained 5.3% compared to February 2020's pre-pandemic level, led by double-digit gains in residential construction.
Becky Schultz
April 2, 2021
Follow Us