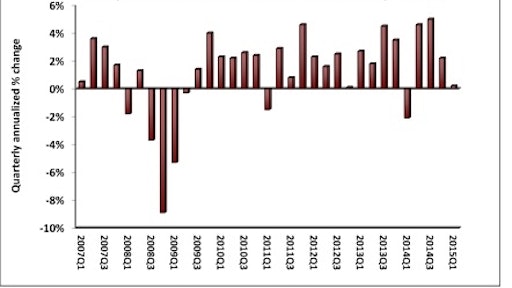 "Lower energy prices had an intense impact during the first quarter of 2015 and consumer spending was not enough to meaningfully offset the plummeting nonresidential fixed investment," said Associated Builders and Contractors Chief Economist Anirban Basu. "Investment in equipment inched up just 0.1 percent and, while investment in intellectual property products expanded 7.8 percent, the third component, investment in structures, fell 23.1 percent during this year's first quarter.

"While the nonresidential fixed investment number doesn't look great, contractors and others should not lose faith in the capacity of the U.S. economy to continue to expand," said Basu. "Investment in structures is volatile due to many circumstances. In addition, winter weather and the West Coast port slowdown didn't help and seasonal adjustments to the data are awkward.

"It's important to note that last year's first quarter was significantly worse for the overall economy," said Basu. "Eventually, consumer spending should pick up, and that will help things bounce back during the second and third quarters of the year. Despite lower gas prices and improving labor market conditions, spending on goods increased only 0.2 percent for the quarter. In addition, spending on services, groceries, and motor vehicles all slipped from their respective fourth quarter 2014 rates. We continue to hope that the Federal Reserve will begin increasing short-term rates in September, as the character of economic data recovers from a soft first quarter."

The following represent the first quarter performance of key segments:

Theo Build announced that the official launch of its new construction payment management software is expected to be in early Spring of 2021, featuring automated invoicing and compliance processes.
Theo Build
February 23, 2021
Follow Us