A dynamic, lightweight structural fill solves a variety of construction challenges on a roadway embankment project in support of a wetlands restoration project in northern California 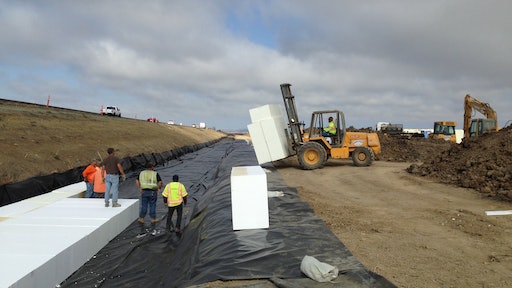 Once the foam was cut it was trucked to the site in a just-in-time-delivery strategy so that each section of blocks was unloaded from trucks in the exact order that it was needed for installation. This allowed Maggiora & Ghilotti’s crews to quickly assemble the blocks in place with minimal need for site staging or protective storage.

Reinforcing a roadway levee as part of a wetlands restoration project in northern California.

When Maggiora & Ghilotti, Inc. was hired to work on a wetlands levee reinforcement project 40 miles inland from San Francisco, Scott Ghilotti, vice president of Maggiora & Ghilotti, knew he’d be looking for innovative solutions, a process which frequently translates to discovering innovative uses of unconventional construction materials. The project, known as Cullinan Ranch, is part of a multi-dimensional effort to restore more than 1,500 acres of tidal wetlands in the San Pablo Bay National Wildlife Refuge. In addition to Maggiora & Ghilotti’s role as general contractor, the project benefited from the expertise of the U.S. Fish and Wildlife Service (FWS), CalTrans (the state highway department) and Ducks Unlimited, the world’s leader in wetlands and waterfowl conservation.

“Wetlands restoration projects always require strategic thinking,” comments Ghilotti, a fourth-generation builder in a family-owned business. “Access to the construction area is almost always impacted by the soil conditions because of the soft and loose nature of the sediment and the volume of moisture within the dirt. Getting heavy equipment in and out really requires a detail investigation of the changing soil conditions across the site and often some out-of-the-box thinking.”

In the case of Maggiora & Ghilotti’s scope of work, Cullinan Ranch involved reinforcing a roadway levee along two miles of Highway 37 and just a few miles from the bay. Prior to restoration, the site had been diked off from natural tides from more than 100 years and used as oat and hay farmland for generations.

In order to recreate a wetlands area that was naturally inviting to fowl and other wildlife, the FWS wanted to mimic the transitional zones between the wetlands and roadway, which meant adding a significant volume of material to accommodate a gentle slope from the elevated levee to the wetlands. However, due the very soft soils in the area, known locally as “Bay Mud”, CalTrans had two major concerns.

First, adding a significant volume of weight to the embankment (in the form of additional soil or even a lightweight concrete fill) could cause roadway settling over time and potentially damage the levee. Second, a strictly soil slope-fill would likely be adversely effected by erosion as water washing from the roadway down the hill side would eventually require additional soil to maintain the desired slope.

During the design stage, Ducks Unlimited proposed the use of expanded polystyrene (EPS) foam as a structural fill because of its extremely light weight and high compressive strength. At about 1% the weight of traditional earth materials, Ach Foam Technologies’ Geofoam is a cellular plastic material with a compressive resistance up to 18.6 psi at 1% deformation. Furthermore, Geofoam is approximately 1% the weight of traditional soil fill making it an ideal solution to a complex problem.

“Geofoam was not only the quickest solution for this project but the cost was on par with other options as well” said Russ Lowgren, an engineer with Ducks Unlimited who worked on the project with Maggiora & Ghilotti.

With the design complete, Ducks Unlimited solicited the project through a hard-bid process and ultimately selected Maggiora & Ghilotti based on a combination of best-price and a long standing relationship built over a number of previous projects. Once the contract was secured, Ghilotti and his team went to work procuring the required materials, one of which was the specified EPS foam blocks.

“Though we had never used EPS Geofoam before, the ACH Foam team was extremely accommodating,” remarks Ghilotti. “Their product representative was very thorough in explaining the manufacturing process, the performance specifications, what size blocks were available and how each individual block could be pre-cut to any dimension as long as it was cut in a straight line.”

With the selection of the ideal lightweight building material determined, Ghilotti was able to map out the placement and configuration of each section of fill to create the required slope grades along the entire two miles of roadway. As a low-bid builder, minimizing the possibility of wasted product during the installation process was a critical component of Ghilotti’s construction strategy. After carefully laying out the exact foam block configuration for each fill section, Ghilotti was able to reduce the total volume of wasted foam to less than a quarter of a percent across the entire two-mile section, a feat that amazed even ACH’s product representatives.

Once the foam was cut it was trucked to the site in a just-in-time-delivery strategy so that each section of blocks was unloaded from trucks in the exact order that it was needed for installation. This allowed Maggiora & Ghilotti’s crews to quickly assemble the blocks in place with minimal need for site staging or protective storage.

After the embankment’s existing drainage ditch was scraped and compacted, the trench was lined with a gas-resistant membrane meant to protect the foam from potentially corrosive contaminants washing off of the road’s surface. With the membrane in place, the foam blocks were assembled according to Ghilotti’s configurations.

“As the crew got used to the placement pattern, putting the foam blocks in place went really smoothly,” notes Ghilotti. In total, the project called for more than 15,000 cubic yards of EPS 29 Geofoam, and Ghilotti estimated his crews were able to install at an average of about 1,500 yards of configured block a day.

Once each section of foam was in place, the sides of the gas-resistant membrane were pulled over the top and fused closed to secure the blocks inside. The final step in creating the required slope was the one that caused Ghilotti the most concern.

“I was really worried about how the over-fill, compaction and grading processes were going to work out,” remarks Ghilotti. “A roadway embankment project of that magnitude requires extremely heavy equipment, some of which is on the order of 35+ tons when fully loaded. The idea of driving a machine weighing that much across blocks made from foam seemed impossible.”

However, the ACH Foam Technology team had assured him with as little as 12 to 18 inches of soil placed over the wrapped foam, the structure would be undamaged by the weight of even the heaviest equipment required, and they were correct.

When asked what other contractors might find most interesting about ACH Foam Technologies’ Geofoam, Ghilotti was quick to reply. “In construction all you can really ask of any product is that it performs as expected. In this case, the Geofoam not only filled the void and supported the weight of the required equipment on top of it but it was incredibly easy to work with and ACH really went the extra mile to support a really streamlined installation process.”