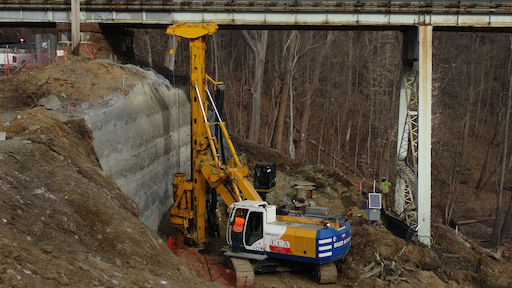 The Bauer BG 18 H Rotary Drilling Rig works in low overhead configuration to install drilled shafts near the Crum Creek Viaduct west abutment with limited overhead clearance. Walsh Construction rented the BG 18 H and BG 20 H from Equipment Corporation of America to install eight 20- to 58-foot-deep, 36-inch-diameter drilled shafts at each pier and 12 at each abutment.

Complete replacement of a 925-foot-long, 100-foot-high viaduct on the Media/Elwyn commuter rail line in Pennsylvania.

The original bridge on this site was a pre-Civil War era, five-span timber arch truss bridge on masonry piers. The structure, built in 1895, underwent repairs in 1983 but was in dire need of replacement to safely carry SEPTA’s passengers on the Media/Elwyn commuter rail line.

Walsh began construction on the substructure in Summer 2015 and is working aggressively toward an etched in stone deadline of Summer 2017. Despite the variety of construction processes involved, drilling the foundations for new footings, piers, and abutments was the key to the project.

Walsh is tasked with building a new viaduct beneath the original structure before demolition can commence. The keystone of the project is foundation work for the substructure, which includes two abutments and four sets of piers. Walsh used the Bauer BG 18 H and BG 20 H Drilling Rigs to install eight 20- to 58-foot-deep, 36-inch-diameter drilled shafts at each pier and 12 at each abutment.

In January 2016 drilling was a week and a half behind schedule primarily due to unexpectedly hard rock and environmental permitting delays, but Walsh was confident drilling would be back on track shortly.

The topography surrounding the viaduct is complicated by steep inclines, wetlands, the meandering Crum Creek and a narrow, snake-like access road, all encapsulated within a densely wooded area that happens to be a designated arboretum. This challenging terrain dictated not only the selection of rigs but also the site preparation.

It was ultimately determined that Walsh would rent the Bauer BG 18 H and BG 20 H Premium Line Drilling Rigs because they were light enough to navigate rough terrain with adequate hydraulic output to core through hard rock of up to 25,000 psi. The low headroom capability of the BG 18 H was determined to be optimal for drilling in work areas with height restrictions.

ECA delivered both drilling rigs in June 2015. The BG 20 H, part of the Aldan location’s existing rental fleet, worked on site through Christmas. ECA coordinated manufacturing and delivery of the BG 18 H with Bauer Maschinen and imported the rig from Schrobenhausen, Germany. Its unique ability to work in both low overhead and standard configuration kept the BG 18 H on site until February 2016. ECA brought in an operator from Bauer to assist with training, but all on-site service and reconfiguration of the BG 18 H was handled by its own technicians in Aldan.

One of Walsh’s main challenges was drilling foundations in hard rock beneath the viaduct with limited headroom near the east and west abutments. The rattling tip of the BG 18 H mast is within mere inches of the steel girders. The BG 18 H worked in standard configuration from late June through early October and was then reconfigured to low headroom.

Vance says the height restricted areas were more severe than expected because the viaduct elevations Walsh was initially given did not account for drilling nuances. He indicates that maneuvers such as putting the drilling rig in crowd force, or pulling up a full bucket can require up to eight inches of additional overhead space.

Project Geologist Bill Bradfield of Schnabel Engineering’s West Chester, PA, office describes the Crum Creek site as “interesting.” “We ran the full gamut of drilling conditions within the span of this bridge,” he says, noting that metamorphic rock in this region can be highly variable over short distances.

The site contained primarily Schist, but production was hampered when crews hit Amphibolite. This extremely hard metamorphic rock was prevalent near the western abutment and the Crum Creek channel.

Bradfield recalls watching production drastically improving from as little as two feet per day with an auger to a foot an hour using a Bauer roller bit core barrel. Walsh initially tried a cluster drill but had no luck keeping the tool straight. The switch to roller bit core barrels also quieted drilling chatter and reduced the strain on the drilling rigs.

Dutton confirms Bradfield’s observations, noting that the production increase was mainly due to the switch from conventional tooling to the Bauer roller bit core barrel. “With conventional tools they were getting two to three feet per day,” he recalls, pointing to an extracted four-foot Amphibolite core. “When the roller bit core barrel was running in optimal conditions they were getting a foot an hour in some really hard rock.”

Conventional drilling tools could not stand alone on this site, according to Dutton. “This is the beast here that did a lot of the hard rock drilling,” he says, pointing to a Bauer roller bit core barrel. Walsh initially considered down-the-hole and hammer drills but ultimately decided the core barrel was the right tool for the job.

ECA designed and fabricated a custom casing drive adapter for Walsh to facilitate overburden drilling. Dutton watches as the operator of the BG 18 lowers the mast, inserts the adapter into J-shaped notches in the casing and begins to seamlessly drill it into the soil from the cab of the rig.

“We fabricated that at the Aldan shop,” he says, as the casing descends into the soil. “You need something to transfer the torque against, so Walsh cut those j-shaped notches in the top of the casing.”

Vance says this innovation reduced costs and eliminated wasted material. “We pulled a lot of the casings out as we drilled shafts so we saved a lot,” he says.

Bridging the gap between utility and aesthetics

Walsh has demonstrated considerable environmental sensitivity throughout the project because of active involvement by neighboring Swarthmore College. Although SEPTA had the right-of-way available for the viaduct, it negotiated with the college to use a necessary adjacent piece of land instead of using Eminent Domain. In addition to obtaining permitting from multiple agencies, the contractor will have to rebuild wetlands, replace up to 6,000 trees and shrubs, and reconstruct a Stonehenge-esque circular formation of Wissahickon Schist slabs dubbed “Crumhenge” by locals.

One of SEPTA’s key concerns was ensuring that its commuter trains could continue to pass safely across the existing viaduct during construction. Every pier and tower on the viaduct has a sensor to monitor for vibration. There are also four inclinometers in each slope to measure movement.

SEPTA will shut down service for roughly 10 weeks during Summer 2016 to allow Walsh to install new girders, bridge deck and catenary towers. Rail cars will travel over the new viaduct by Labor Day 2016. Walsh will conclude the project by Summer 2017 with demolition of the existing structure, removal of the access road and restoration of the site to original condition.

Brian M. Fraley is the owner and chief strategist for Fraley AEC Solutions, LLC, a marketing communications firm that builds solutions on a foundation of industry understanding for the construction and design marketplace. He has served this niche market for more than 20 years. Brian also authored the eBook, "Designing an A/E Brand that Drives Selections." He can be found on LinkedIn, Twitter, Google+, and regularly contributes to the AEC Marketing InSITE Newsletter, The AEC Straight Talker Blog and various industry publications.