Economy continues to expand for 10th month in a row. 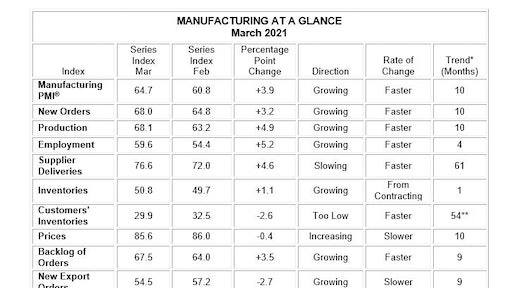 The Institute for Supply Management® (ISM®) released its Manufacturing ISM Report on Business for March on April 1, which measures national economic activity in the manufacturing industry. According to the report, the manufacturing sector grew in March and the overall economy experienced a 10th consecutive month of growth. The report was issued by Timothy R. Fiore, chair of the ISM® manufacturing Business Survey Committee.

The Manufacturing PMI®, or the Purchasing Managers’ Index is a set of economic indicators based off surveys of private-sector companies. In March, the PMI® came in at 64.7%, an increase from February of 3.9 percentage points. It’s also the highest reading since December 1983, when it sat at 69.9%. A reading of above 50% means that the manufacturing economy is expanding. If it’s less than 50%, then the economy is, in general, contracting. For example, in May 2020, when much of the country was shut down due to the COVID-19 pandemic, the ISM PMI was 43.1%. 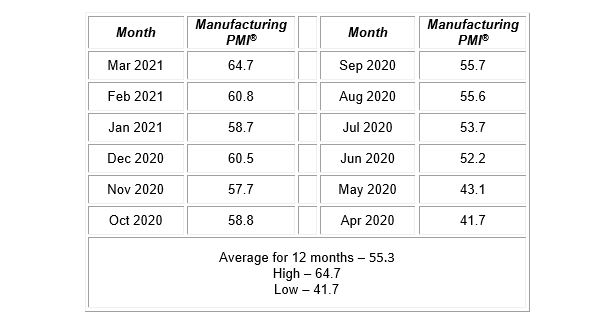 “The Manufacturing PMI® continued to indicate strong sector expansion and U.S. economic growth in March,” Fiore stated in the report. “All five subindexes that directly factor into the Manufacturing PMI® were in growth territory and at higher levels compared to February. All of the six biggest manufacturing industries expanded, in the following order: computer and electronic products; fabricated metal products; food, beverage and tobacco products; transportation equipment; chemical products and petroleum and coal products. The New Orders and Production indexes continued to expand at strong levels. The Supplier Deliveries Index continued to reflect suppliers’ difficulties in maintaining delivery rates, due to factory labor-safety issues, transportation challenges and increased demand. All 10 subindexes were positive for the period; a reading of ‘too low’ for Customers’ Inventories Index is considered a positive for future production.”

As many in the construction industry already know, prices are raw materials are up. This is reflected in the report, as well.

The ISM® Prices Index registered 85.6 percent, indicating raw materials prices increased for the 10th consecutive month. During the past two months, the index has been at its highest levels since July 2008, when it registered 90.4 percent.

A Prices Index above 52.7 percent, over time, is generally consistent with an increase in the Bureau of Labor Statistics (BLS) Producer Price Index for Intermediate Materials.

“Suppliers are struggling to manage demand and capacity in the face of chronic logistics and labor issues. No end in sight,” one machinery company stated.

Employment increased in the sector by 5.2 percentage points over February and will likely continue to rise for the next few months, according to the ISM® PMI® report.

“The Employment Index grew for the fourth month in a row,” Fiore says. “For the seventh straight month, survey panelists’ comments indicate that significantly more companies are hiring or attempting to hire than those reducing labor forces.” 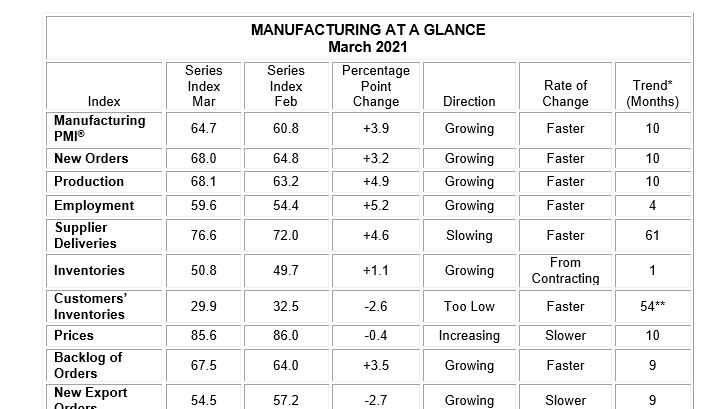 One of Many Positive Indicators

The ISM® PMI® report corroborates recent findings from other trusted sources on the economy. The U.S. Bureau of Labor Statistics recently reported that the construction sector added 110,000 in March, recovering 83.6% of the jobs lost during the early stages of the pandemic.

The U.S. Census Bureau also recently announced that construction spending dipped slightly in February, but numbers were up 5.3% year-over-year.

In the past week, Associated Builders and Contractors reported that national nonresidential construction declined 1.3% in February, but the organization expects a robust turnaround in coming months as more people are vaccinated.