Half of key finance industry executives believe business conditions will improve over the next four months, prompted by the COVID-19 vaccine rollout. 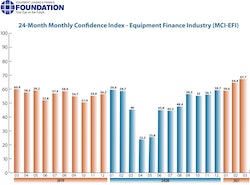 Overall, confidence in the equipment finance market reached its highest level in three years, with half of the key industry executives who responded to the Equipment Leasing & Finance Foundation’s March 2021 Monthly Confidence Index for the Equipment Finance Industry (MCI-EFI) forecasting business conditions to improve over the next four months as economic activity expands. This should mean greater financing availability for those seeking to invest in their business.

The MCI-EFI reports a qualitative assessment of both the prevailing business conditions and expectations for the future as reported by key executives from the $900 billion equipment finance sector. It shows confidence in the equipment finance market rose from 64.4 in February to  67.7 in March, the highest level seen since April 2018.

Expanding availability of COVID-19 vaccines plays a substantial role in growing confidence levels. “The vaccine rollout is now progressing quickly, and while some predict we won't see the end of this pandemic until year end, I believe everyone that wants a vaccine will be able to receive one by early May,” projected survey respondent Bruce J. Winter, president, FSG Capital, Inc. “This bodes well for the return of strong economic activity that will almost certainly boost capital spending significantly.”

Lenders are increasingly upbeat about financing activity for the year and going forward, though cautions remain. “We are relatively positive on domestic and global economic activity for this year, and likely next,” noted David Drury, senior vice president and head of equipment finance, Fifth Third Bank. “Despite lingering disruptions, with the tailwinds of government stimulus, central bank liquidity, excess capacity and pent-up demand, global economic growth may positively surprise in 2021.

“The big question that could change our mind would be a return of inflation, which would change the dovish nature of most global central banks,” he continued. “Higher inflation would lead to higher interest rates and less of an incentive for businesses to borrow and invest.”

When asked to assess conditions over the next four months:

When asked about the outlook for the next six months:

Information provided by the Equipment Leasing & Finance Foundation and edited by Becky Schultz.