New Construction Starts Down 9% in August 2014 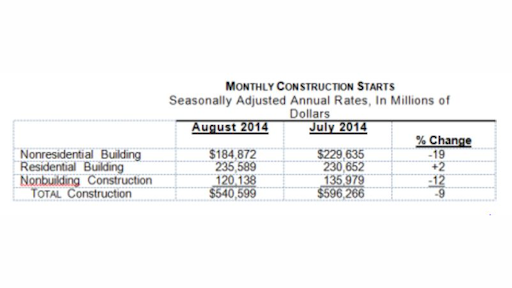 By geography, total construction starts in the first eight months of 2014 showed gains in three regions – the South Central, up 15%; the Northeast, up 5%; and the West, up 1%

At a seasonally adjusted annual rate of $540.6 billion, new construction starts in August dropped 9 percent, according to McGraw Hill Construction, a division of McGraw Hill Financial. The decline followed July’s elevated volume, the strongest so far in 2014, and brought activity back to the average pace reported during the first seven months of this year. By major sector, nonresidential building fell sharply, after being lifted in July by the start of several large manufacturing plant projects, while nonbuilding construction (public works and electric utilities) also retreated. Residential building in August ran counter by posting a modest gain, helped by the continued growth for multifamily housing. Through the first eight months of 2014, total construction starts on an unadjusted basis were $361.4 billion, up 4 percent from the same period a year ago.

The August statistics lowered the Dodge Index to 114 (2000=100), compared to a revised 126 for July. “The broad trend for construction activity remains upward, but on a month-to-month basis there are still the occasional setbacks,” stated Robert A. Murray, chief economist for McGraw Hill Construction. “Nonresidential building over the past two months was boosted by the start of several unusually large energy-related manufacturing projects, so the pullback in August was not unexpected. The commercial side of nonresidential building continues to see moderate growth, and there’s now further evidence that the institutional structure types have at least stabilized after a lengthy five-year decline. While public works construction is now settling back, the August passage of the $10.8 billion patch to the Highway Trust Fund should help to keep the slide from getting too severe. Residential building continues to be supported by the ongoing strength shown by multifamily housing. However, this year’s pause for single family housing has emerged as an area of concern, limiting the growth that’s being reported for total construction activity.”

Nonresidential building in August plunged 19 percent to $184.9 billion (annual rate), after the strong gains that raised activity for this sector 20 percent over the past two months. The manufacturing plant category in August dropped 81 percent from a July that had included the start of a $3 billion petrochemical plant and a $1.7 billion ethylene plant, both located in Texas, among other large manufacturing plant starts. August did include groundbreaking for a $500 million polyethylene plant expansion in Texas and a $130 million fabric manufacturing plant in Louisiana – substantial projects by themselves, but smaller in magnitude and number than the large projects entered as construction starts in July. If the manufacturing plant category is excluded, nonresidential building in August would have posted a 9 percent gain. The commercial building categories overall in August advanced 6 percent. Store construction led the way by jumping 27 percent, aided by the $157 million retail portion of the $957 million Nordstrom Tower, a massive residential/retail/hotel mixed use high-rise that reached groundbreaking in New York. Warehouse construction in August grew 8 percent, maintaining the improvement that’s been shown after a weak first quarter. Office construction edged up 2 percent, helped by the August start of such projects as a $375 million office building in Milwaukee, Wis., a $175 million office tower in Bellevue, Wash., and a $117 million corporate headquarters in Portland. Hotel construction retreated 10 percent after a strong gain in July, although August did include the start of such projects as a $200 million hotel in Washington D.C. and the $82 million hotel portion of the Nordstrom Tower in New York.

The institutional building group in August climbed 12 percent. Healthcare facilities surged 76 percent after a weak July, lifted by the start of two large projects in New YorkY – an $800 million clinical medical facility and an $800 million ambulatory care center. While the healthcare facilities category has been generally lackluster for much of 2014, up only 2 percent year-to-date, there have been a few months like August that featured the start of noteworthy healthcare construction projects. Educational buildings, the other major institutional category, receded 9 percent in August after July’s 11 percent gain. Large educational building projects that reached groundbreaking in August included a $120 million research lab at Michigan State University in East Lansing, Mich., and an $84 million law school at Arizona State University in Phoenix. Through the first eight months of 2014, the educational building category was up 8 percent from a year ago. The smaller institutional categories revealed a mixed pattern in August. Gains were reported for public buildings and churches, up 27 percent and 17 percent respectively, as each showed improvement from weak activity in July. Declines were reported in August for amusement-related work and transportation terminals, down 10 percent and 19 percent respectively.

Nonbuilding construction, at $120.1 billion (annual rate), dropped 12 percent in August. The public works group as a whole was down 6 percent, due primarily to a 30 percent slide for the “miscellaneous public works” category. In July, the miscellaneous public works category included $1.2 billion for work on Phase 2 of the Dulles Corridor MetroRail project in northern Virginia. By contrast, the largest miscellaneous public works project entered as an August start was a $267 million runway reconstruction at JFK International Airport in New York. Also losing momentum in August were river/harbor development, down 1 percent; and sewer construction, down 7 percent. On the plus side, the water supply category grew 7 percent in August, and gains were reported for both highways, up 7 percent; and bridges, up 9 percent. On a year-to-date basis, highways and bridges together were down 15 percent from last year. Electric utility construction in August decreased 33 percent, resuming the downward trend that’s been present for the past year-and-a-half. August did include the start of a $775 million natural gas-fired power plant in Maryland, a $260 million hydroelectric power plant in Iowa, and a $222 million wind farm in North Dakota, but these were not enough to avert the month’s downturn for electric utility starts.

Residential building in August grew 2 percent to $235.6 billion (annual rate). Multifamily housing provided the upward push, increasing 10 percent. The largest multifamily projects that were entered as August starts were the $718 million multifamily portion of the Nordstrom Tower in New York, a $420 million apartment building in New York, a $198 million condominium building in San Francisco, a $169 million multifamily building in Boston, and a $150 million multifamily project in Dallas involving the redevelopment of an office building into residential apartments. Through the first eight months of 2014, the metropolitan area with the highest dollar amount of multifamily starts was New York, up 60 percent from the previous year. Rounding out the top five metropolitan areas for multifamily construction starts (with the percent change from a year ago) were the following – Washington D.C., up 47 percent; Los Angeles, up 55 percent; Miami, up 25 percent; and San Francisco, up 47 percent. Single family housing in August slipped 1 percent, staying basically flat with the level that was reached towards the end of 2013. In August, reduced single family construction was reported in the West, down 3 percent; and the South Central, down 2 percent; while slight 1 percent gains were reported in the Northeast, the Midwest, and the South Atlantic regions. Murray noted, “The recovery for single family housing has now been stalled for two-thirds of 2014, and it remains to be seen whether the recent easing of lending standards for residential mortgages, as indicated by the Federal Reserve’s survey of bank lending officers, will be able to help single family housing regain its upward track.”

Working closely with owners and agencies, the ARA has taken several steps to address the coronavirus outbreak and protect its members and their workers.
March 20, 2020
Follow Us