The dollar value of construction starts in September, excluding residential activity, fell by 13.6% versus August 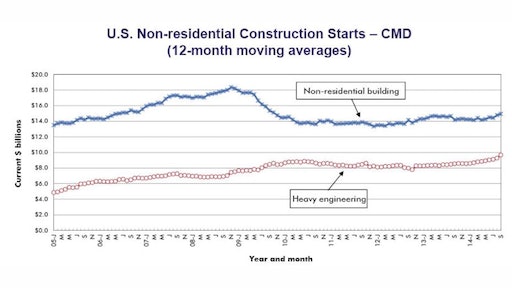 Among the three major construction subcategories, only heavy engineering starts (4.4%) recorded a month-to-month increase in September.
According to CMD, the dollar value of construction starts in September, excluding residential activity, fell by 13.6 percent versus August. Nearly one-quarter of the decline was due to seasonality. CMD’s long-term average August-to-September percentage change has been -3 percent.

September’s month-to-month change was a mild retreat after August’s 25 percent increase. The dollar volume of starts in the standalone month of September, at $27.7 billion, was the third highest this year. It was exceeded only by June and August, both at $32 billion.

When compared with the same month of last year, September 2014 stepped up by almost one-third (+30.4 percent). Year-to-date starts, with only the final quarter still to go, are ahead by 10.5 percent versus the first nine months of 2013.

The starts figures are in “current” dollars, meaning they are not adjusted for inflation.

“Nonresidential building” plus “engineering/civil” work accounts for a considerably larger share of total construction than residential activity. The former’s combined proportion of total put-in-place construction in the Census Bureau’s August report was 62 percent versus the latter’s 38 percent.

Stock markets may have turned skittish of late, due to Europe’s economic standstill and worries about military “hot spots” in the Middle East, but many of the fundamentals for the U.S. economy have been growing stronger.

Weekly initial jobless claims have averaged less than 300,000 for the past three months, which is bullish for employment gains. The total number of jobs has risen by 227,000 month-to-month, on average, so far this year, dropping the unemployment rate to 5.9 percent, a post-recession low.

The jobless rate in construction has also declined, to 7 percent this September from 7.7 percent in August and from 8.5 percent in September 2013.

Among the three major construction subcategories, only heavy engineering starts (+4.4 percent) recorded a month-to-month increase in September. Institutional (-18.2 percent) and commercial work (-22.1 percent) were down to almost the same degree.

The smaller category of industrial starts continued its pattern of extreme swings. After increasing nearly 1,000 percent in August, thanks to a limited number of mega-sized project initiations, it plummeted (-98.2 percent) back to earth in September.

When this September’s figures are compared with the same month of last year, the story is quite different. Engineering/civil starts (+54.8 percent) were up by more than half. While somewhat more restrained, commercial (+18 percent) and institutional (+16 percent) were still ahead nicely. Only industrial (-92.6 percent) had a sad tale to tell.

In year-to-date starts, engineering/civil work (+17.5 percent) is the frontrunner, with institutional (+8.6 percent) jogging forward at about half its speed. Commercial (+2 percent) is little more than stalled. Year-to-date industrial starts (+22.8 percent) are up by between one-fifth and one-quarter.

According to the Department of Labor’s most recent Employment Situation report, the total number of jobs in the U.S. rose 1.9 percent year-over-year in September. Payrolls in construction (+3.9 percent) climbed slightly more than twice as fast.

The increase in architectural and engineering services employment, at 4.5 percent, was a further impressive notch higher. Along the construction pipeline, the “drawing board” stage is in advance of both starts and the hiring of more on-site workers.

CMD’s nonresidential construction starts series, because it is comprised of total-value estimates for individual projects, some of which are quite large, has a history of being more volatile than many other leading indicators for the economy.

A start is determined by taking the announced bid date and adding 30 days. It is then assumed the project will break ground within 30 to 60 days of the start date. Reed continues to follow the project via its network of researchers. If it is abandoned or re-bid, the start date is updated to reflect the new information.