Nonpartisan, non-profit research finds no state that has repealed prevailing wage has received the benefits claimed by politicians, but they have damaged their own construction industries 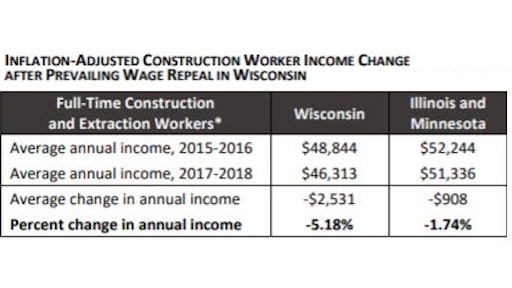 For the third time in as many years, state-level research conducted by the nonpartisan Midwest Economic Policy Institute (MEPI) shows the repeal of state prevailing wage laws has failed to produce any of the cost savings proponents promised, and has instead resulted in lower wages for workers, weakened apprenticeship systems, less overall bid competition, and more tax dollars being exported out-of-state.

Analyzing data from the U.S. Census Bureau, U.S. Department of Labor, and Wisconsin Department of Transportation, the report was authored jointly by researchers from the Midwest Economic Policy Institute and Colorado State University-Pueblo. Findings are consistent with pre-repeal analyses of Wisconsin’s construction sector published by Smart Cities Prevail and the State of Wisconsin’s Legislative Fiscal Bureau, as well as recent reports on other state-level prevailing wage repeals which showed similarly negative impacts in Indiana (2018) and West Virginia (2019).

“Politicians promised Wisconsin taxpayers that eliminating local minimum wage standards on public construction projects would save money and improve bid competition,” said study co-author and Illinois Economic Policy Institute (IEPI) Policy Director Frank Manzo IV.  “But repeal has delivered neither.  Worse, it has functioned as a jobs program for businesses and workers from outside of Wisconsin, while slashing blue-collar workers’ wages and weakening the state’s construction industry as a whole.”

Despite the lack of cost savings, the data shows that inflation-adjusted Wisconsin construction worker incomes declined by more than 6% – or more than $2,600 per year – and their likelihood of being covered by an employer-provided health insurance plan shrank by 4% after repeal. The research shows that the pay of private construction CEOs in Wisconsin grew by an average of 53% after repeal – or more than $93,000 per year – while the costly problem of worker turnover in the heavy and highway construction sector grew by 8% and cost overruns worsened.

“The actual observed changes in public construction spending since repeal of prevailing wage in Wisconsin underscore the longstanding academic consensus that the substitution of high-skilled local workers by lower-skilled, lower-wage, nonlocal workers does not produce cost savings,” said study co-author and CSU-Pueblo Economist Dr. Kevin Duncan. “Instead, it creates new inefficiencies in the form of workforce turnover, quality, cost overruns, and safety problems. And this does not even include the added cost shown in prior research that lower wages for construction workers increase reliance on public assistance programs.”

Researchers added that the lack of cost savings is magnified by the damage that prevailing wage repeal has done to Wisconsin’s economy and construction industry.  According to project data from the Wisconsin Department of Transportation, the number of highway construction projects being awarded to firms from out-of-state has exploded by 60% since repeal – tens of millions of dollars that would have otherwise been invested in workers and businesses inside the Badger State. Overall bid competition has also shrunk by 16%.

“A strong Wisconsin economy relies on a strong construction industry, and the industry relies on a stable supply of skilled workers,” added MEPI policy analyst and study co-author Jill Gigstad. “By all accounts, repeal of prevailing wage in Wisconsin has functioned as a low-wage jobs program for businesses in other states, while eroding the Wisconsin construction industry’s ability to train or compete for the skilled workforce it needs.”

The Associated General Contractors of America and Associated Builders and Contractors issued statements condemning House passage of the PRO Act, which they claim will hurt the workers it’s intended to help.
Becky Schultz
March 10, 2021

Three female team members from Sunbelt Rentals discuss their roles and career paths, as well as the larger career potential for women within the construction industry.
Sunbelt Rentals
March 9, 2021

As the industry celebrates Women in Construction Week (March 7-13), it offers a chance to highlight a frequently overlooked resource that could help to plug at least some of industry's labor gaps.
Becky Schultz
March 7, 2021
Construction Safety

Double M Roofing & Construction apparently had fall-protection equipment on site but owner and employees were not using it, as they did two weeks later when OSHA again discovered the company owner and crew working at height without fall protection
Occupational Safety & Health Administration
March 2, 2021