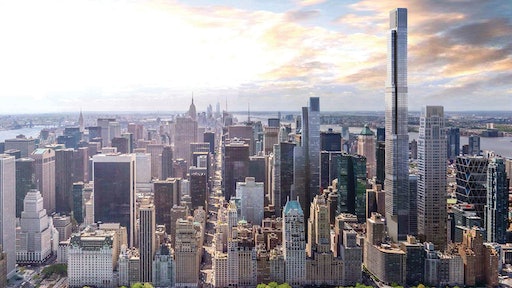 The Central Park Tower is topping out and making its presence known among the famous New York City skyline. At 1,550 foot (472m) tall, this skyscraper relied on standard Putzmeister concrete placing system to pump concrete to new heights, place tough mix under high pressures, and tackled an intricate project that features the most dramatic cantilever in Manhattan to date.

The multifaceted tower is set for completion in 2020. The 99-story skyscraper at 217 W 57th Street in Midtown will include luxury condominium residences and a variety of amenity spaces, as well as a Nordstrom department store, which extends over 300,000 square feet. The new seven-story retail space is Nordstrom’s flagship location in New York City, which opened October 24, 2019.

The tower is being developed by the Extell Development Company and SMI USA, and is panned to be the most expensive condo project in the city's history. The project was proposed in 2010 and construction began in 2014. Pinnacle Industries II, LLC of Harrison, New York, installed the concrete placing system in January 2016.

The well-known contracting company, incorporated in 2001, had vast experience, but they needed the ideal combination of concrete placing system to perform amongst the challenges of the massive job. They looked to Putzmeister products sourced from the Paterson, New Jersey-based Alexander Wagner Company, Inc., authorized Putzmeister distributor for more than 30 years.

Along the way, Extell purchased air rights to introduce an exceptional 30-foot cantilever over a neighboring, pre-existing property. The cantilever is 300 feet above ground elevation. This cantilever offers the future residents never before seen views of the New York City staple, Central Park. The cantilever is a self-supporting system consisting of 5,000 cubic yards of concrete within a 36-foot tall outrigger/belt wall between the 12th and 13th floors, where 1,200 feet of the tower’s structure sits. Coinciding with the tower’s durable stability are the main core walls and columns that post up from the foundation of the tower. The same trailer pump and placing boom combination was effectively used for the concrete placement for the construction of the cantilever.

Three floors of luxurious amenities can be found for apartment owners. A total of 50,00 square feet showcase pools, a wellness center, cigar bar, and ballroom. The unmatched views of Manhattan and Central Park come with a hefty price tag.  The costs of the condos are currently ranging from 7 million all the way up to 63 million for an offering cost. The most expensive listing was contemplated to be close to $95 million.

As the tower continues to reach completion, more information about condo availability and cost has become obtainable.

Pinnacle used a high performance concrete placing system capable of handling 100,000 total cubic yards of concrete for the tower. Approximately 600 cubic yards were pumped an hour. They had very good experience in the past with Putzmesiter pumps for other jobs and that satisfaction led Pinnacle to using their equipment again.

“When it came time to working on this high-rise building, Pinnacle wanted to use reliable equipment that was purchased for a different job about year prior because they were blown away by the production they got,” says Alex Wagner, CEO of the Alexander Wagner Company.

The BSA 14000-D HP 8" trailer pump, with eight-inch by 83-inch (200 x 2100mm) material cylinders started the heavy lifting. During November 2017, the tower reached 630-foot height; the trailer pump attained 84.5 cubic yards per hour volume at 1,450-psi pressures, from the rod side. This output was maintained while pumping 12,000-psi concrete, which has a much greater friction factor than the 6,000-psi concrete expected on the upper floors.

The trailer pump model accommodated pours up to 1,200 foot; however, at this height, the BSA 14000 HP-D4 7" trailer pump stepped in, because it could achieve even higher pressures up to 3,350 psi and offered maximum outputs up to 74 yd³/hr on the piston side to maintain best volume going up the building.

The BSA 14000 HP-D4 7” trailer pump is seven-inch by 83-inch (180 x 2100mm) material cylinders and is equipped with a powerful 630 hp Cat engine that meets the Tier 4 emission directive. When the manufacturer converted to Tier 4 engines, a full redesign of the new model was accomplished, so the unit provided even more power as well as reduced fuel consumption than the previous version.

In order to reach all aspects of the tower without using additional hoses, the Putzmeister MX 28/32Z separate placing boom came into play. It was chosen for its 78-foot horizontal reach that aided in placing the concrete. The MX 28/32Z model was used on the brand of formwork for the project, eliminating weight as an issue. This placing boom was clamped down on a base that traveled up with the core walls. The placing boom was attached to the climbing framework in order to keep the boom bounce to a minimum. Putzmeister concrete pumps have a standard with the exclusive free flow hydraulic system. Free flow hydraulics reduces changes in material pressure, allowing for smooth pumping and consistent concrete flow.

When using a five-inch pipeline with the trailer pumps that have five-inch outlets there is no need for a reducer. One-quarter-inch heat-treated single wall pipe was used to place around 45,000 cubic yards of concrete. The original pipeline was replaced, and two brand new pipelines were installed to help finish the job. Both pipelines were half-inch heat-treated single wall, with one for placing concrete and one on standby.

Concrete Mix Made To Get The Job Done

Empire Transit Mix, the ready mix company, supplied the concrete from its Brooklyn location throughout the entirety of the tower’s progression. A strong 14,000-psi concrete was used for the lower levels of the building. Once the tower reached 500 feet, a 12,000-psi took over. As the tower soared to new heights, 6,000-psi mixes were used in the building’s development.

The AED Foundation’s Pipeline for Success model demonstrates the steady increase in technicians that will enter the industry in the next few years, with the goal to reach 10,000 technicians by 2024.
AED Foundation
August 26, 2020
Follow Us