Delinquency rate for commercial mortgages packaged into bonds is forecast to climb as much as 2.4 percentage points to 5.75% in 2017, reversing several years of declines 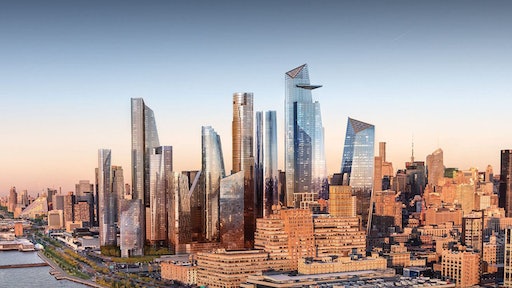 Conceptual illustration of Hudson Yards, on Manhattan's West Side, showing the largest mixed-use commercial residential project under construction in the U.S. The Moody’s/RCA Commercial Property Prices Indices, which cover apartment, retail, office and industrial sectors, dropped 40% from the start of the last recession in 2007 to the end of 2009. They’ve since more than doubled and now stand 23% above the pre-crisis peak.

Single-family housing prices have recovered gradually from the mortgage bust 10 years ago, but commercial real estate is showing signs of being overheated in markets such as New York, San Francisco and Boston.

Fed officials have mostly said they plan to address potential asset price bubbles with financial supervision, rather than by raising interest rates at a faster pace than they currently expect. But the hot-spots are testing their patience.

“It’s an important sector and so has to be on the radar screen,” said Jonathan Wright, an economics professor at Johns Hopkins University in Baltimore and a former Fed economist. “At least a couple of bank presidents would see it as a substantive argument for tighter policy. But I don’t see any indication that the center of the committee is inclined to adopt a faster pace of tightening.”

The Fed targets maximum employment and 2 percent inflation, but must also balance concerns about financial stability and not repeating the mistakes of the last crisis, which originated in an overheated residential property market.

“I would describe financial stability risks at this point as being moderate -- so not elevated, not zero, but moderate,” Yellen said Jan. 19.

Commercial and Multifamily Construction Starts in 2016 Rise in Most of Top U.S. Metropolitan Areas