Caterpillar stock price sinks as facilities in Illinois are raided by law enforcement officials from the IRS, Federal Deposit Insurance Corp. and Department of Commerce 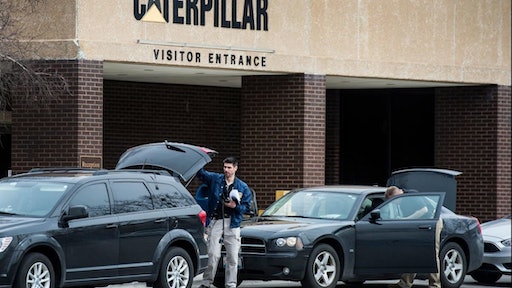 Federal officials gather at their vehicles as they execute a search warrant at the Caterpillar facility in Morton, Ill., one of three Cat facilities they're searching in Central Illinois today.

Caterpillar facilities in Illinois and have been raided by federal law enforcement, pushing shares in the equipment giant lower by more than 4% in Thursday afternoon trading.

The U.S. Attorney's Office in the Central District of Illinois conducted the raid in concert with three other federal agencies: The Federal Deposit Insurance Corporation office of inspector general, the Internal Revenue Service criminal investigation division and the Department of Commerce office of export enforcement.

A Department of Justice spokesperson confirmed the investigation to Forbes by telephone, stating that Caterpillar's Peoria, Ill. headquarters and its offices in East Peoria and Morton, Ill. were subject to the law enforcement operation. Caterpillar also issued a statement confirming that law enforcement was on its premises, and that the company was cooperating.

Caterpillar's tax rate and its treatment of replacement parts sales has been the subject of scrutiny in Washington for several years. The machinery company has been dogged by accusations of using sham transactions to shift profits to low tax jurisdictions like Switzerland, saving billions in taxes.

(more about raids on Caterpillar offices . . . )