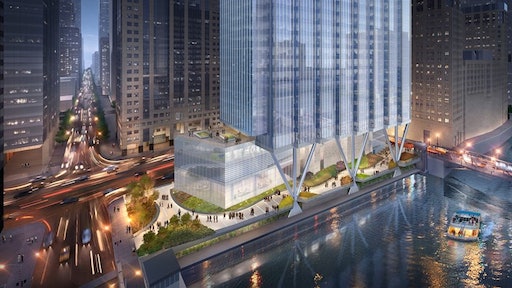 The bill for high-end office space in Chicago rose almost 20% in 2016, the biggest increase in the U.S. and second-highest in the world.

Rents in Chicago's newest and best-located office buildings rose to $38.84 a square foot in 2016, up from an average of $32.40 in 2015, according to a report from commercial real estate brokerage CBRE.

"You're as bullish as the anchor tenants are bullish, and we've seen strong interest," CBRE leasing broker Drew Nieman said.

This first wave of office development since the recession comes as overall downtown office vacancy fell to 11.1% in the fourth quarter of 2016, the lowest level since 2001.

Most-read construction stories include 6 things to put in every construction contract, Highways Coronavirus Relief Act introduced in House, uses for mixed reality and smart glasses in construction and more
October 15, 2020
Follow Us