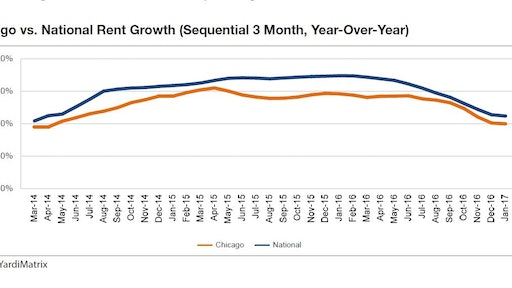 The metro added 50,000 jobs in the past year, more than half in high-earning sectors. Further growth is expected across the metro, as Amazon, Cars.com and Google expand their presences in Chicago. The economic environment is also encouraging new businesses, according to Built In Chicago’s annual report, which shows that startups raised $1.7 billion in funding in 2016.

Chicago has been deemed a smart city, and the local government is committed to improving the metro’s transport infrastructure, particularly the rail system, through the $2.1 billion Red and Purple modernization Program. The downtown continues to benefit from company relocations and expansions, while authorities are trying to raise a spike in suburban development through local reforms.

The metro’s multifamily market is stable, with high occupancies and strong investor interest, which pushed the sales volume to a cyclical peak in excess of $3 billion in 2016. Completions are picking up, with more than 60,000 units in various stages of development. Yardi Matrix forecasts a 4.0% rent growth in 2017, as demand will remain strong, while a wave of new supply is about to come online.