National engineering firm has completed over 14,000 projects and grown to include 200 employees in 10 offices since its founding in 1977 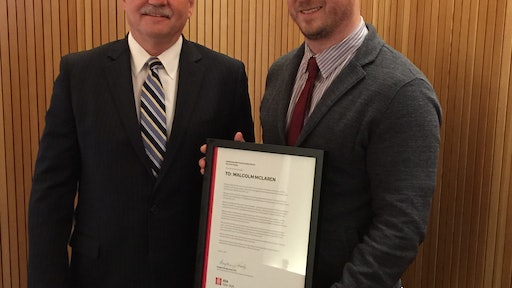 McLaren Engineering Group, a full-service engineering firm serving 10 markets, is celebrating its 40th anniversary this month at its headquarters in West Nyack, NY. Since its founding by Malcolm G. McLaren in 1977, the firm has completed over 14,000 projects and grown to include 200 employees in 10 offices. Licensed in 48 states, the firm has designed and engineered some of the country’s most important bridges, structures and entertainment venues.

“I started McLaren Engineering Group in my basement when I was 25 years old, performing underwater inspections on bridges and offering structural engineering services for buildings,” said Malcolm G. McLaren, P.E., president and CEO of McLaren Engineering Group. “Our innovative engineering designs and out-of-the-box thinking have pioneered trends and created unique solutions in the industry. All McLaren employees should be proud of their extraordinary work.”

Inspired by Jacques Cousteau, Malcolm G. McLaren pioneered the engineer-as-diver profession in the 1970s. Since then, McLaren’s firm has worked to improve over 300 miles of New York’s coastline, taking what was once deteriorating waterfront and transforming it into vibrant transportation hubs and destinations for businesses, tourists and residents.

“It’s been an honor to design projects all over the world for McLaren,” said William Gorlin, P.E., vice president and entertainment division chief, McLaren Engineering Group. “One of our standout moments was our engineering of the Dancing Cranes of Sentosa in Singapore where we took two 80-ft.-tall, 150,000-lb. structures and found a way to make them perform animated, graceful movements to honor the country’s heritage.”

Other standout projects for McLaren include the firm’s work on the cable net wall of One World Trade Center, rehabilitation of the docks at Brooklyn Navy Yard, a creation of a recreational pier in Weehawken, NJ, underwater inspections of historic Ellis Island, and a feasibility study on a gondola to give commuters an easy, revolutionary transit option in Albany, NY.

“We’re proud of the impressive engineering resume McLaren has built -- but an even greater accomplishment is what we’ve given back to the community,” said Steve Grogg, senior vice president and division manager, McLaren Engineering Group. “One of our proudest moments was in 2012, when, in the aftermath of Hurricane Sandy, McLaren sprung to action conducting emergency structural inspections on the homes of displaced families, examining bridge foundations and designing repairs to piers. Overall, we inspected more than 20,000 structures.”

Employees are marking the firm’s anniversary with events that include a photo contest of its projects, the display of a visual timeline of McLaren’s milestone moments and a give-back program with local nonprofits. In addition, the American Institute of Architects New York Chapter presented Malcolm G. McLaren with a proclamation recognizing his firm’s accomplishments. In part, the proclamation states: “McLaren is a true innovator – pioneering the concept of Professional Engineer diving in the 1970’s, incorporating new materials into designs, pushing the envelope for performance and entertainment venues, and helping to create the ferry transit system in New York Harbor.”