Led by investments from Canada, China and Singapore, deal volume has increased 68% over the past five years, according to CBRE 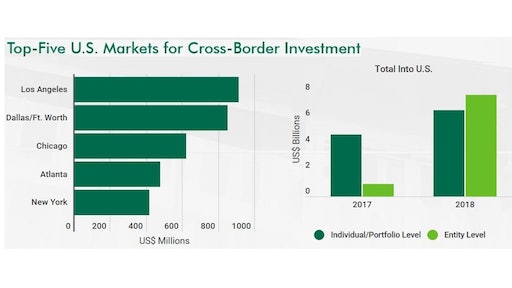 Canadians were the top foreign source of capital to U.S. industrial real estate, investing about $5.5 billion (39% of all cross-border industrial deals. Chinese sources were a close second, having spent roughly $4.5 billion in 2018.

Foreign investors were behind 21% of the total industrial real estate investment volume in the U.S. in 2018, according to a recent CBRE report. The activity translated into an aggregate $14.4 billion in acquisitions. Investments originating from Canada, China and Singapore accounted for roughly $10 billion of the investments.

The billions of dollars foreign investors spent on purchasing industrial assets in 2018 marked a 152% jump over the 2017 total.

“Deal volume has increased by 68% for the past five years, even when excluding the large entity-level transactions,” Matthew Walaszek, senior research analyst with CBRE and report co-author, told Commercial Property Executive.

(more on foreign investment in US industrial real estate . . . )