US Construction Fuel Use Down 3.4% in January

January fuel consumption down 2.1% vs. the previous month 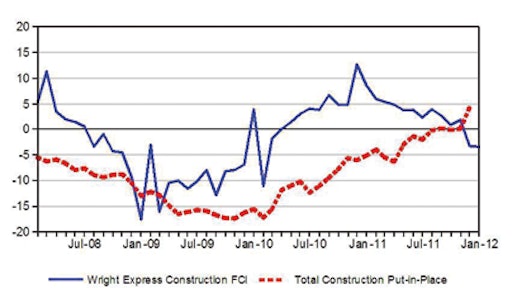 According to IHS Global Insights, Wright Express' partner in the FCI, the January index results indicate the U.S. construction industry may not be as positive as recent construction data suggests. The IHS analysts note that the seasonally adjusted FCI was nearly flat in December and fell in January, warning that recent months' construction growth indications "must not be overemphasized."

Industry spending remains very low. Construction employs 2 million fewer people than it did at its 2007 peak. The housing market is not expected to accelerate until 2013, or climb above the 1.5-million threshold until 2015.

Indicators are tested at monthly, quarterly, and annual frequencies, with the greatest insights produced using the year-over-year percent change of the monthly data.

The Wright Express Construction FCI, which is available monthly in advance of the U.S. Census Bureau figures on construction spending, is available at http://www.wrightexpress.com/fci.

February Construction Fuel Use Down 0.6% for Year; Up 1.1% vs. January