Projected retail prices for regular gasoline average $3.58 per gallon in Q4 2012, up from $3.30 per gallon projected last month 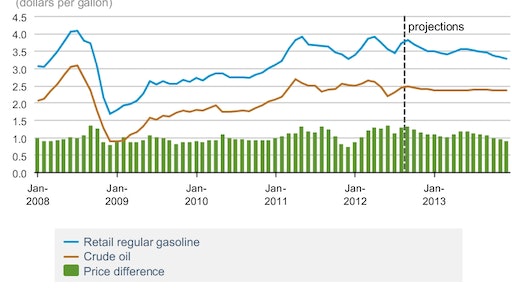 The U.S. Energy Information Administration expects higher on-highway diesel fuel prices in October and November to increase the national average in 2012. Retail prices, which averaged $3.84 per gallon in 2011, are expected to average $3.96 per gallon in 2012. The EIA expects the 2013 average to drop to $3.73.

After a sharp increase in retail gasoline prices earlier this year, the monthly average price for regular grade gasoline reached $3.90 per gallon in April. Prices then fell for three consecutive months, averaging $3.44 per gallon in July.

Rising crude prices contributed to an increase in regular gasoline retail prices to $3.84 per gallon on September 3. EIA expects retail gasoline prices to begin declining later this month as the gasoline market recovers and transitions from summer-grade to winter-grade gasoline specifications.

The 2017 tax act eroded US economic resources that are now necessary to rescue our economy from the impact of the pandemic's accompanying recession; here are some ways President Biden will propose to roll back some of its give-aways
Larry Stewart
Jan 25th, 2021

2021 will be an unpredictable year for the construction industry with some segments outperforming others.
Curt Bennink
Jan 26th, 2021

Dr. Larry Kokkelenberg, president at the Center for Business Development, says there are three leadership skills you can learn today and four keys to becoming a transformational leader.
World of Asphalt
Jan 26th, 2021

The 2017 tax act eroded US economic resources that are now necessary to rescue our economy from the impact of the pandemic's accompanying recession; here are some ways President Biden will propose to roll back some of its give-aways
Larry Stewart
Jan 25th, 2021

For construction contractors, caution will be crucial continue to be crucial for the months ahead, but the COVID-19 relief bill does bring a bright spot.
Garry Bartecki
Jan 26th, 2021

While the Monthly Confidence Index was changed for the month, there was a notable uptick in optimism for business conditions over the next four months.
Equipment Leasing & Finance Foundation
Jan 25th, 2021

Hear about the prevalence of fraud in construction, the steps contractors can take to identify and mitigate risks and the role technology can play in prevention.
Becky Schultz
Jan 25th, 2021

OSHA-related content dominated the news this week as Biden announced his plans to increase enforcement of violations, especially those specific to COVID-19. We discuss the top 10 OSHA violations and how to avoid them.
Jessica Lombardo
Jan 22nd, 2021

Mafic is partnering with the University of Southampton in England to develop wearable technology for hard hats for improved safety and faster progress on projects.
Mafic Ltd.
Jan 22nd, 2021

If you’re going to take the time and effort to bid for a state, local and education project, be sure to put your best foot forward.
Ben Vaught
Jan 22nd, 2021

New series of payment letters will make clear what’s owed, and OSHA will put businesses that fail to pay citations on a priority list for further inspection
Larry Stewart
Jan 18th, 2021
Follow Us