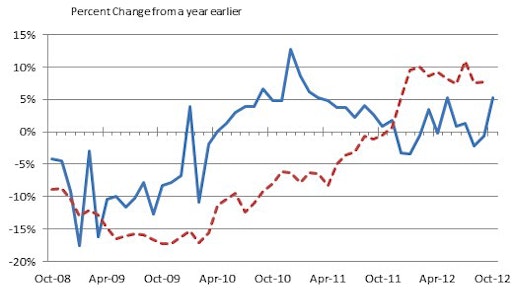 Wright Express (WEX Inc.), a leading international provider of physical, digital and virtual corporate card payment solutions, in collaboration with IHS, a leading global source of information and analytics, released results of its October WEX Construction Fuel Consumption Index (FCI), which indicated an increase of 5.2 percent in October versus its level the previous year.

The WEX Construction FCI measures national fuel consumption statistics for the construction industry, which provides an accurate and up-to-date indication of construction activity in the United States.

The indicators were tested at monthly, quarterly and annual frequencies, with the greatest insights produced using the year-over-year percent change of the monthly data. For October 2012, the WEX Construction FCI reported that fuel consumption by U.S. construction companies increased 4.1 percent versus the previous month and increased 5.2 percent versus October 2011.

Last month’s WEX Construction FCI was consistent with the modest growth indicated by the seasonally-adjusted index in most of the government’s subsequent construction data releases. Construction spending excluding improvements – a good measure of activity – increased by 0.4 percent in September, while private residential construction showed solid growth of 3.5 percent.

September housing permit statistics grew to the highest level since July 2008 by increasing 11.6 percent. Housing starts increased by 15 percent in September to an annual rate of 872,000.

The strong result for the WEX Construction FCI in October coincided with a positive October employment report, as construction employment rose by 17,000 jobs. Total construction put-in-place, which is released a month later than the Fuel Consumption Index, grew by 0.6 percent in September.

31 States Added Construction Jobs in October, but Employment Fell in 28 States over 12 Months

According to the IHS analysis, the two consecutive months of positive growth in the WEX Fuel Consumption Index coincides with recent signs of life for housing statistics. New home sales jumped 5.7 percent in September to an annual 389,000-unit annual rate, which is the highest figure since April 2010.

While new home sales grew, inventory remained extremely tight. This is good news since low inventories will spur builders to either put up new homes or lose sales.

Another incentive for increased construction is higher prices. In September, the average and median prices of a new home were 14.5 percent and 11.7 percent higher than the previous year, respectively. Although new home sales are improving, they are not expected to reach the normal levels of above 800,000, until 2015.