November housing starts slipped 3% from an above-trend October to an annual rate of 861,000 units, while permits rose 3.6% to strongest level in four years 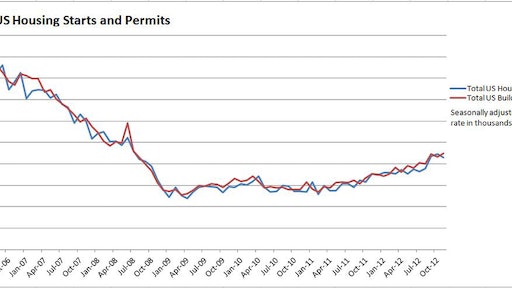 Following October's above-trend rate of housing starts, November starts slipped 3.0 percent to a seasonally adjusted annual rate of 861,000 units. Permits for new construction rose to their strongest level in more than four years, with a 3.6 percent gain to 899,000 units.

Following an above-trend rate of production in October, nationwide housing starts slipped 3.0 percent to a seasonally adjusted annual rate of 861,000 units in November, according to data from HUD and the U.S. Census Bureau. Meanwhile, permits for new construction rose to their strongest level in more than four years, with a 3.6 percent gain to 899,000 units.

“Many builders have reported improving conditions in their local housing markets and are increasingly optimistic about the spring buying season, but they are being very careful not to get ahead of demand,” observed Barry Rutenberg, chairman of the National Association of Home Builders (NAHB) and a home builder from Gainesville, Fla. “Meanwhile, tight credit conditions are still the chief obstacle to a quicker recovery.”

“The starts report for November reflects a readjustment to a more sustainable level of production following significant gains in the previous two months,” said NAHB Chief Economist David Crowe. “That said, starts in this quarter are still running well ahead of the third quarter, and we are on track for a projected 25 percent improvement in housing production for all of 2012. Moreover, the fact that issuance of building permits hit its fastest rate since July of 2008 in November is indicative of the continued, modest growth that we expect to see in new-home construction through 2013.”

Single-family housing starts declined 4.1 percent to a seasonally adjusted annual rate of 565,000 units in November, while multifamily starts edged down 1.0 percent, to 296,000 units.

Permit issuance, which can be an indicator of future building activity, rose 3.6 percent to a seasonally adjusted, annual rate of 899,000 units in November. This was due to a 10.6 percent gain to 334,000 units on the multifamily side, as single-family permits held virtually unchanged for the month, at 565,000 units.

Housing Remains on Growth Track for 2013