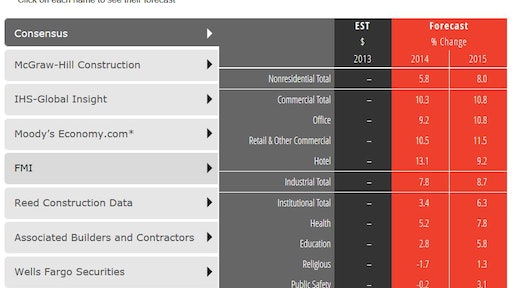 These are some of the key findings from the American Institute of Architects' (AIA) Consensus Construction Forecast, conducted in December 2013. Semiannually, the AIA compiles results from the leading national construction forecasters to develop its consensus. Forecasters lowered their outlook for 2014 from the 2013 midyear update, which had projected 7.6 percent growth for 2014. However, disruptions in the economy in the second half of the year -- the federal budget sequester, a federal government shutdown, credit restrictions for construction projects, and rising long-term interest rates -- stalled the construction recovery.

Spending on nonresidential building construction grew more than 5 percent in 2012—reversing a steep four-year decline. And while the budget sequester, government shutdown, and credit conditions offered some 2013 obstacles, the more encompassing roadblock to continued construction growth in 2013 was a U.S. economy that appears to have grown less than 2 percent, well below the 2.8 percent pace of 2012. World economic growth had its worst performance since the 2009 global financial meltdown, garnering only a 2.9 percent growth rate, according to estimates from the International Monetary Fund (IMF).

What will change in 2014? The international economy is expected to move back to more traditional growth levels, with world economic growth expected to increase almost a full percentage point, according to the IMF. But there are more improvements on the horizon closer to home:

Home building is expected to see strong gains. The slowdown in household formations during the foreclosure crisis is expected to reverse, and steady gains in house prices will bolster confidence that it’s once again safe to buy a home. The consensus is that housing starts will increase 25 percent this year, but even that pace of growth would only produce between 1.1 and 1.2 million starts, well below long-term trends.

Energy is a net-positive for the economic outlook. After decades in which energy costs were a principal risk factor to the economy, they have transformed into a positive benefit. In recent years, hydraulic fracturing has dramatically increased domestic production of both crude oil and natural gas. As a result, household energy costs have been trending down for the past five years.

The manufacturing sector is strong. After a steep downturn in production output during the recession, the manufacturing sector has come roaring back. In spite of relatively weak growth in the overall economy, industrial production has averaged gains of almost 4 percent per year over the past four years, the strongest four-year performance since the late 1990s. Lower energy costs are a major factor in making domestic manufacturing more attractive, particularly for energy-intensive industries like steel and chemicals.

Consumer spending is increasing. Consumer spending for large-ticket purchases has been one of the bright spots in the economy in recent years, having grown 6 percent or more for each of the past four years. With household wealth levels now 10 percent above their pre-recession high, consumer spending is likely to continue. Encouragingly, a higher share of the wealth gain now comes from home equity, which is more broadly enjoyed than other forms of wealth.

This is not to say that there won’t be economic challenges moving forward. The unemployment rate remains high, and 2013 ended with fewer workers on payrolls than before the recession. The U.S. has a large and growing federal debt level, a situation that is likely to be a contentious political issue as the next debt ceiling limit approaches in the next few months. And it is still too early to tell how the economy will respond to the Fed’s winding down of its bond-buying program.

Construction on a solid footing

With the economy finally stabilizing, there should finally be some substantial improvement in the construction outlook. Both design activity at architecture firms and the fundamentals of the commercial property market point to healthy growth moving forward.

Even with a modest dip last November and December, the AIA’s Architecture Billings Index (ABI) has risen in the vast majority of the last 16 months. With such sustained growth in design activity, continued improvement in construction activity will follow suit. While the residential sector has led the upturn in the ABI, firms specializing in the commercial/industrial sector have reported solid results for most of the past year. Even firms serving the institutional sector have generally been reporting modest levels of growth over the past year.

In recent months, Sunbelt firms have enjoyed the best business conditions. These regions tended to be the most overbuilt prior to the downturn. Now that growth is returning, markets in these regions are capturing a disproportionate share of activity. For example, a recent analysis of construction employment growth in metro areas conducted by the Associated General Contractors (AGC) using U.S. Department of Labor data reported that metro areas in the West accounted for five of the top 10 areas in the country in terms of construction jobs added over the past year. Three of these top growth markets were in California. Two additional growth markets were in the South. Still, in Boston, New York, and Minneapolis/St. Paul, which have not seen much population growth in recent years, a strong economy has put these three in the top 10 in terms of gains in construction employment over the past year.

In addition to increased workloads at architecture firms, indicators from the construction sector point to increased activity levels moving forward. Commercial property values—which declined at a steeper rate nationally than did house prices during the recession—have recovered nicely. As of late 2013, commercial property values had gained back almost two-thirds of their losses, according to data from Moody’s/RCA Commercial Property Price Index.

Other commercial market indicators point to strength. Vacancy rates for offices and retail facilities have been declining recently, and occupancy rates at hotels have been increasing. Over the next two years, vacancy rates are expected to continue to decline for offices and retail facilities, and rents are projected to increase, according to a consensus forecast of industry experts conducted last October by the Urban Land Institute. These indicators reflect a growing demand for commercial space.

In spite of a weak overall recovery to date, supply conditions for nonresidential building are unusually tight. Construction financing remains a problem. Bank credit standards for construction and land development loans have eased modestly, according to the October Federal Reserve Board Senior Loan Officer Survey. However, the modest easing does not offset the sharp increase in demand for these loans that many of the loan officers are reporting.

Construction costs are also rising. In a low-inflation environment with weak levels of construction activity, construction costs would be expected to be stable at worst. However, the U.S. Department of Labor reported that producer prices for major nonresidential building types have risen in the 3 to 4 percent range over the past year. Overall consumer inflation increased by only 1 percent over this period, and producer prices were up only 0.7 percent. Lumber, plywood, and gypsum prices were up at a double-digit pace over this period, with insulation materials up almost as much.

With less of a decline in government spending, and with healthy fundamental conditions in the nonresidential building sector (growing property values, declining vacancies, and increasing rents), 2014 should produce healthy gains in nonresidential building activity. With spending stronger in the private side of the economy, the commercial/industrial building sector is expected to be resurgent. In 2013, when overall nonresidential building spending saw almost no growth, spending on commercial and industrial facilities increased about 5 percent. Growth in this sector will accelerate this year, reaching 10 percent, according to the consensus forecast panel, and will see slightly stronger growth in 2015. The hotel sector is expected to be the strongest commercial sector this year, but offices and retail space also should see healthy gains.