Highway Trust Fund to be Empty in Late August 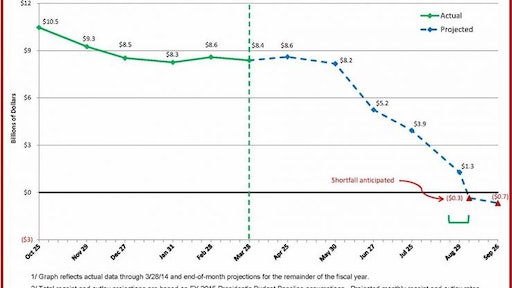 US DOT moved up its projection of when the balance in the Highway Account of the Highway Trust Fund will fall to zero more than a month to late August, 2014.

The U.S. Department of Transportation's monthly update of its Highway Trust Fund Ticker estimates the Highway Account of the primary source of transportation-infrastructure funding will fall to zero as much as a month earlier, running dry in late August.

The surface transportation program continues to outlay at a greater pace than receipts. As a result, the cash balance has dropped by nearly $3.5 billion since the General-Fund transfer.

US DOT continues to project that the Highway Account balance will fall below $4 billion in late July.

At some point between when the Highway Account falls below $4 billion but before it runs out of money, US DOT will change its cash-management strategies to keep the account solvent. New strategies may include reimbursing states weekly instead of daily or paying states for only a portion of the reimbursement requests they submit. No new construction projects are likely to begin in that environment.

Based on current spending and revenue trends, the US DOT estimates the Mass Transit Account of the Highway Trust Fund will have a balance of approximately $1 billion at the end of fiscal 2014.

The Mass Transit Account began fiscal 2014 with approximately $2.5 billion in cash, and received a $2-billion transfer from the General Fund ($2.2 billion authorized in MAP-21, reduced by sequestration.