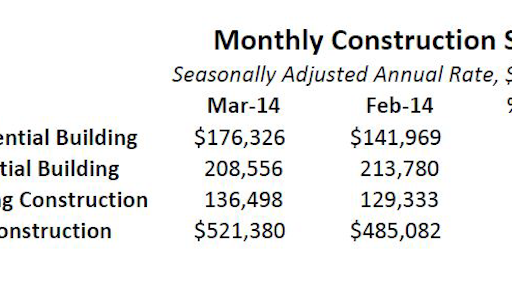 New construction starts in March advanced 7% to a seasonally adjusted annual rate of $521.4 billion, according to McGraw Hill Construction.  Nonresidential building picked up the pace after its lackluster performance at the outset of this year, while nonbuilding construction managed a moderate gain.  Meanwhile, residential building settled back as single family housing remained sluggish.  During the first three months of 2014, total construction starts on an unadjusted basis were reported at $107.4 billion, down 2% from the same period a year ago.

The latest month’s data lifted the Dodge Index to 110 (2000=100), up from February’s 103, and close to last year’s average reading for the Index at 112.  “The slow start for construction activity in early 2014 can be attributed to tough winter weather conditions, in combination with the up-and-down pattern that’s frequently been present during the hesitant upturn witnessed over the past two years,” stated Robert A. Murray, chief economist for McGraw Hill Construction.  “This is particularly true for nonresidential building, which bounced back sharply in March after depressed activity in January and February, alleviating some concern that its recovery may be stalling.  Nonresidential building’s potential for more growth in 2014 is being supported by a rising volume of bank lending directed at commercial real estate development, more energy-related manufacturing projects, and signs that the institutional building sector is finally turning the corner after five years of decline.  Nonbuilding construction in 2014 is seeing a less severe pullback for electric utilities compared to last year, although public works is generally proceeding at a slower clip.  Residential building so far in 2014 is benefitting from more strength for multifamily housing, yet the loss of momentum for single family housing in the first three months of 2014 stands out relative to the steady gains registered in 2012 and most of 2013.”

Nonresidential building in March jumped 24% to $176.3 billion (annual rate), regaining upward movement after declines in January (down 9%) and February (down 7%).  The often volatile manufacturing plant category provided much of the lift in March, surging 140% after a weak February.  Large manufacturing facilities that reached groundbreaking in March included these energy-related projects – an $800 million methanol chemical plant in Texas, a $400 million upgrade to an oil refinery in Minnesota, an $80 million crude oil terminal in New Mexico, and a $56 million biomass-to-gasoline refinery in Louisiana.  The commercial categories in March edged up 1%, reflecting a mixed pattern by individual structure type.  Office construction continued its ascent from low levels, advancing 17% in March with the help of these large projects – a $160 million office building at the Fan Pier site in Boston MA, a $100 million tenant fit-out at One World Trade Center in New York NY, an $87 million office building in Austin TX, and an $83 million office building in Houston TX.  Through the first three months of 2014, the top five metropolitan areas ranked by the dollar amount of new office starts were – New York NY, Houston TX, Boston MA, Washington DC, and San Antonio TX.  Hotel construction in March increased 19%, with the support of $95 million for the hotel portion of a $200 mixed-use facility at the Mall of America in Bloomington MN.  Store construction in March receded 6%, although it did include $65 million for the retail portion of the mixed-use facility at the Mall of America.  Warehouse construction in March dropped 45%, experiencing a pause from its well-established upward trend.

The institutional side of the nonresidential building market grew 30% in March after a subdued February.  Healthcare construction surged 64%, in a departure from its generally flat pattern of activity over the past few years, reflecting the March groundbreaking for an $820 million Kaiser Permanente hospital in San Diego CA.  The educational building category in March improved 18%, with the support of such projects as a $64 million geosciences building at the University of Colorado/Boulder, a $64 million classroom facility at Rutgers University in New Brunswick NJ, a $50 million high school in North Little Rock AR, and a $46 million renovation to a vocational school in Tyngsboro MA.  Of the smaller institutional structure types, the public buildings category was unusually strong in March, rising 125% with the start of a $317 million federal courthouse building in Los Angeles CA and a $105 million addition to a county courthouse building in St. Louis MO.  The amusement-related category advanced 44% in March, and included groundbreaking for such projects as a $120 million university sports arena in Champaign IL and $110 million for renovation work at the Billie Jean King National Tennis Center in Flushing NY.  Church construction and transportation terminal work showed weaker activity in March, falling 14% and 28%, respectively.

Nonbuilding construction, at $136.5 billion (annual rate), increased 6% in March.  Support for the nonbuilding total came from a 170% jump for electric utilities, which included the March start of three very large projects – a $1.2 billion natural gas-fired power plant in Florida, a $364 million natural gas-fired power plant in Oregon, and a $350 million wind power facility in Maine.  The public works categories overall in March retreated 8%, as the result of a 53% drop for miscellaneous public works (site development, pipelines, mass transit) and a 10% slide for water supply construction.  The other public works categories showed growth in March relative to February.  Bridge construction climbed 45%, boosted by the start of the $585 million Gerald Desmond Bridge Replacement project in Long Beach CA.  Highway construction in March increased 26%, and included a $109 million lane widening project in Texas.  Through the first three months of 2014, the top five states ranked by the dollar amount of new highway and bridge projects were – Texas, California, North Carolina, Pennsylvania, and Virginia.  Gains were also reported in March for sewer construction, up 17%; and river/harbor development, up 11%.

Residential building in March settled back 2% to $208.6 billion (annual rate).  The multifamily side of the housing market retreated 9% from its elevated February amount, although March was still 17% above the average monthly pace for multifamily housing during 2013.  The large multifamily projects that were reported as March starts were located primarily in the Northeast, including a $400 million apartment building in New York NY, a $330 million apartment building in Brooklyn NY, a $144 million apartment building in Jersey City NJ, and a $74 million apartment complex in Westwood MA.  Single family housing in March was essentially unchanged from February, and since the most recent peak was reached in October 2013 construction activity has been flat or down for five straight months.  By geography, March showed slight gains in the Midwest (up 4%), the South Atlantic (up 2%), and the Northeast and South Central (each up 1%), while the West retreated (down 6%).  Murray noted, “The soft pattern for single family housing has probably been the result of tough weather conditions in recent months, so it’s expected that construction will pick up during the second quarter, given tight inventories of new homes for sale and what are still low mortgage rates.  At the same time, the limits of the single family housing recovery are becoming more apparent, including constrained demand as the result of strict bank lending standards and the preference by some segments of the millennial generation for apartments in urban locations.”

The 2% decline for total construction starts on an unadjusted basis during the first three months of 2014 relative to last year was due to a mixed performance by major sector – nonresidential building, down 4%; residential building, up 3%; and nonbuilding construction, down 8%.  By geography, the pattern of total construction starts for the January-March period of 2014 was the following – the South Central, down 9%; the Midwest, down 7%; the South Atlantic, down 4%; the West, up 4%; and the Northeast, up 8%.

Fed Shows Faith in US Economy with Bond-Buying Reduction

Economists Agree Housing and the Economy will Continue Climbing through 2015