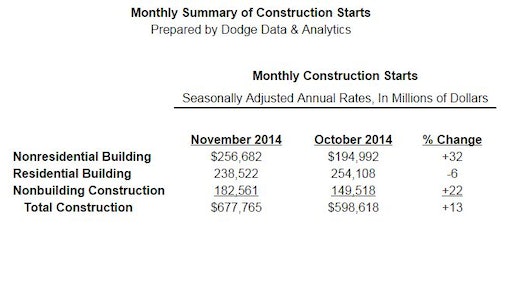 At a seasonally adjusted annual rate of $677.8 billion, new construction starts in November climbed 13% from the previous month, according to Dodge Data & Analytics (formerly McGraw Hill Construction). Nonresidential building had a particularly strong month, lifted by the start of several unusually large projects, including two massive manufacturing plants and an airport terminal redevelopment. The nonbuilding construction sector also contributed to the latest month’s surge, boosted by a liquefied natural gas facility. Meanwhile, residential building retreated in November, as multifamily housing settled back from its brisk pace in October. For the first eleven months of 2014, new construction starts on an unadjusted basis were $530.8 billion, up 7% from the same period a year ago.

The November statistics raised the Dodge Index to 143 (2000=100), up from a revised 127 for October and marking the strongest month so far in 2014. “After the sluggish activity witnessed at the outset of 2014, new construction starts have generally strengthened, showing an up-and-down pattern around a rising trend, with November coming in especially strong,” stated Robert A. Murray, chief economist for Dodge Data & Analytics. “While residential building has decelerated in 2014, due to the pause by single family housing, the nonresidential building sector has assumed the leading role in keeping the construction expansion going. Part of this year’s strength for nonresidential building comes from a surge of manufacturing plant projects, featuring more energy-related production facilities as well as activity from other industrial sectors. The commercial side of nonresidential building is continuing its moderate growth path, supported by further improvement in market fundamentals and greater investor interest. And, the institutional side of nonresidential building has finally turned the corner after five years of decline, aided by the improved financing climate and the passage of numerous construction bond measures in recent years.”

Nonresidential building in November soared 32% to $256.7 billion (annual rate). A substantial boost came from a 253% increase for the manufacturing plant category, maintaining the often volatile behavior that’s been present this year. The two largest manufacturing projects entered as November starts were a $2.5 billion lithium ion battery factory for Tesla Motors in Reno NV and a $1.3 billion nitrogen urea plant in Enid OK. Other large manufacturing plant projects were a $375 million upgrade to a paper products mill in Brewton AL and a $360 million propane dehydrogenation plant in Mont Belvieu TX. If the manufacturing plant category is excluded, nonresidential building in November would have still shown a moderate gain, rising 10%. The commercial building group in November grew 7%, resuming its upward track after easing back in the previous two months. Hotel construction posted a 15% November gain, featuring the start of the $265 million Mohegan Hotel in Uncasville CT as well as a $126 million hotel in Chicago IL. Office construction advanced 7%, lifted by the start of the $254 million Partners HealthCare headquarters in Somerville MA and the $245 million Joint Operations Center for the U.S. Army at Ft. Meade MD. Both stores and warehouses lost momentum in November, slipping 5% and 7%, respectively.

The institutional building group in November increased 12%, aided by a healthy gain for transportation terminal work, up 221%. The transportation terminal category reflected the start of the $1.6 billion airport terminal redevelopment program in Salt Lake City UT. Healthcare facilities reported a 13% gain in November, and included groundbreaking for such projects as the $312 million Emory Hospital Patient Tower in Atlanta GA and the $276 million Cleveland Clinic Cancer Center in Cleveland OH. Also showing growth was the public buildings category, improving 12%. On the negative side, educational facilities slipped 6% in November, although the latest month included the $327 million expansion of the Campus Crossroads project at the University of Notre Dame in South Bend IN, involving three buildings for classrooms, research, and student activities. Weaker activity was also registered by churches, down 18%; and amusement-related facilities, down 36%.

During the first eleven months of 2014, nonresidential building climbed 17% relative to the same period a year ago. Manufacturing plant construction surged 82% year-to-date, pushed upward by the large projects in November as well as numerous energy-related projects that were entered earlier in 2014. The commercial building group increased 13% year-to-date, featuring gains for hotels, up 28%; office buildings, up 24%; and warehouses, up 15%; while store construction lagged behind with a 1% decline. The institutional building group grew 6% year-to-date, lifted by an 11% increase for educational facilities, which is the largest nonresidential building category by dollar volume. Other gains were reported for amusement-related facilities, up 10%; transportation terminals, up 8%, and public buildings, up 2%. Declines were reported for healthcare facilities, down 3%; and churches, down 12%.

Nonbuilding construction, at $182.6 billion (annual rate), advanced 22% in November. The electric power and gas plant category provided most of the lift, jumping 363%, which reflected the $3.6 billion Dominion Cove Point LNG Liquefaction Project in Maryland being entered as a November start. Also supporting this category’s strong November volume was a $571 million natural gas-fired power plant in Virginia and a $280 million natural gas processing facility in North Dakota. The public works group in November retreated 8%, pulling back after an 8% gain in October. Highway and bridge construction dropped 7% and sewer construction plunged 58%. On the plus side was a 31% increase for water supply construction, helped by a $150 million water pipeline and reservoir project in Texas, plus gains of 29% and 3% for river/harbor development and miscellaneous public works, respectively.

For the January-November period of 2014, nonbuilding construction decreased 4% from a year ago. The public works group was down 6% year-to-date, as highway and bridge construction retreated 13% from a very strong amount in 2013 that included several substantial bridge projects, such as the $3.1 billion Tappan Zee Bridge replacement. Declines were also registered by river/harbor development, down 6%; and water supply systems, down 7%. Year-to-date increases were reported for sewer construction, up 9%; and miscellaneous public works (supported by increased rail mass transit work), up 6%. The electric utility and gas plant category registered a 4% year-to-date gain.

Residential building in November fell 6% to $238.5 billion (annual rate). Multifamily housing retreated after its strong October performance, sliding 21%. Despite the decline, there were still a substantial number of large multifamily projects that reached groundbreaking in November, including eleven projects valued at $100 million or more. These were led by a $290 million residential tower in Miami FL, plus two apartment towers in Chicago IL, valued at $280 million and $217 million respectively. Single family housing in November edged up a slight 1%, essentially holding steady with the flat activity that’s been present since the end of last year. Murray noted, “While there are signs that the banking sector is beginning to improve access to home mortgages, as shown by lending survey results, there has yet to be a discernible positive impact on single family homebuilding.”

During the first eleven months of 2014, residential building grew 7% compared to a year ago, a much smaller increase than the 26% gain reported for full year 2013. Single family housing was up only 2% yearto- date, reflecting this pattern by major region – the South Central, up 7%; the Northeast, up 3%; the South Atlantic, up 2%; the West, down 1%; and the Midwest, down 3%. Multifamily housing revealed a much stronger year-to-date performance, climbing 25%. By major region, multifamily housing showed this pattern – the Northeast, up 34%; the South Atlantic, up 28%; the South Central and Midwest, each up 23%; and the West, up 13%. The top five metropolitan areas for multifamily starts year-to-date were New York NY, Miami FL, Washington DC, Los Angeles CA, and Chicago IL.

The 7% increase for total construction starts at the national level during the first eleven months of 2014 showed gains for all five major regions, to varying degrees – the South Central, up 15%; the South Atlantic, up 10%; the West, up 6%; the Northeast, up 2%; and the Midwest, up 1%.