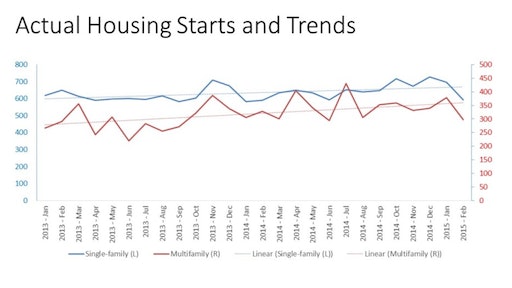 “This drop is not surprising based on our recent surveys, but our builders continue to show cautious optimism in the months ahead,” said NAHB Chairman Tom Woods, a home builder from Blue Springs, Mo.

“February’s numbers indicate that wavering consumer confidence continues to impact the housing recovery,” said NAHB Chief Economist David Crowe. “Buyers are waiting for a stronger, more reliable economy before making a home purchase, and builders are responding to their reluctance. Even with this month’s drop in production, we expect the housing market to move forward this year in step with an improving economy.”

Regionally, the Midwest, South and West registered permit gains of 6.1 percent, 7.3 percent and 2.2 percent, respectively, while the Northeast posted a 17.4 percent loss.

The underlying conditions for a good, not great, housing rebound remain in place. The economy is adding jobs at a much faster pace than earlier in the recovery, overall growth is more dependably positive, mortgage rates are historically low and there is considerable pent-up demand waiting to be released. Consumers need to regain their confidence in those trends and to readjust their expectations for home prices. The softness in the fourth quarter GDP estimates and the very slow rise in worker pay and household incomes contributed to the current hesitation.