Overall employment has been at record levels for more than a year, but only five states have exceeded pre-recession highs for construction employment 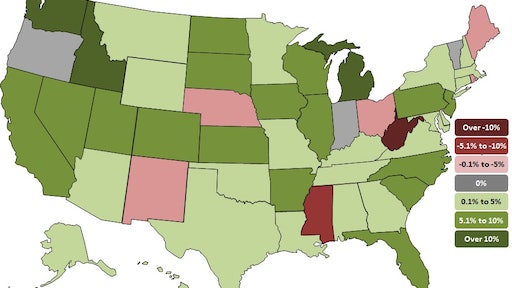 While employment has been on the increase, only Iowa, Louisiana, North Dakota, Oklahoma and South Dakota have exceeded pre-recession highs for construction employment.

Construction firms added jobs in 40 states and the District of Columbia between April 2014 and April 2015 and in 30 states and D.C. between March and April, according to an analysis today of Labor Department data by the Associated General Contractors of America. Association officials said that even as construction employment continues to expand, workforce shortages and infrastructure funding challenges threaten future growth.

“The latest data show that construction is growing across most of the country but the gains remain uneven by month and state,” said Ken Simonson, the association’s chief economist. “Construction employment grew faster than overall employment in most states in the latest 12 months, but the industry faces two challenges: a lack of experienced workers in many locations and a risk that funding for highway and transit projects will lapse in the next few months.”

Pennsylvania (10,000 jobs, 4.3 percent) added the most jobs between March and April, followed by:

Minnesota had the highest percentage increase for the month, followed by Arkansas (5.2 percent, 2,400 jobs), Pennsylvania and Nevada (3.4 percent, 2,200 jobs).


Simonson observed that construction employment fell so far and for so long in most states that many veteran workers have left the industry for other sectors or have retired. While overall employment has been at record levels for more than a year, only five states have exceeded pre-recession highs for construction employment: Iowa, Louisiana, North Dakota, Oklahoma and South Dakota.

“Contractors are struggling to find workers with the right skills in states that had really deep losses in construction employment, such as Nevada, where employment remains 51 percent below the peak set in June 2006,” Simonson added.