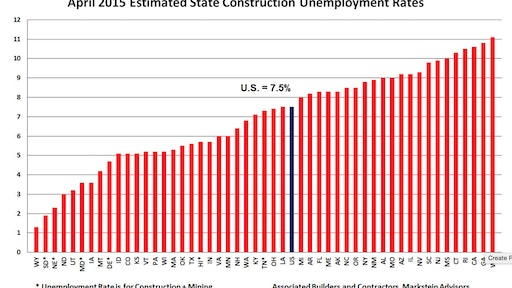 Most states are showing improvement from a difficult first quarter. However, when taking a longer-term overview and averaging out those fluctuations, the economic picture is one of slow but steady advancement.

View states ranked by their year-over-year improvement in construction employment.

View each states' unemployment rate for all industries.

Wyoming took over first place from Nebraska, which fell to number three. This was an exchange of their March rankings mainly due to Wyoming’s larger drop in its construction unemployment rate rather than poor performance on Nebraska’s part.

The five states with the highest construction unemployment rates (from highest to lowest) were:

Among the states with the five highest construction unemployment rates in April, four of the five remained the same as in March, though in a different order. West Virginia went from third highest in March to highest in April. It was also the only state in the bottom five that saw its construction unemployment rate increase on a year-over-year basis.

The West Virginia economy has been struggling in recent months as the state has suffered setbacks in one of its major industries — coal. That has been compounded by the drop in energy prices, adversely affecting its natural gas industry. Also, as West Virginia has become more export oriented, the rise in the foreign exchange value of the dollar has been another drag on its economy. In terms of construction, from April 2014 to April 2015, West Virginia had the greatest loss of construction jobs of any state both on a percentage and absolute number basis.

Georgia went from fifth highest construction unemployment rate in March to second highest in April even as it experienced a solid 2.2 percent drop in that rate from April 2014. Georgia’s decline in the rankings is less about a poor economy (although its construction unemployment rate is in the low double digits) than that other states improved more.

This also appears to be the case for California whose construction unemployment rate went from tied for tenth highest in March to third highest in April. Again, although that rate fell both on a monthly and a year-over-year basis, it remained in the low double digits.

Rhode Island improved from the worst construction unemployment rate in March to fourth worst in April. New Jersey, which was fourth worst in March, also improved three notches to seventh worst as its April rate fell to just below 10 percent.

Connecticut was another state moving up three places from second worst in March to fifth worst in April. Both of these New England states, Rhode Island and Connecticut, have suffered from a harsh winter and a slow recovery from the recession, but appear to be showing some signs of life.

View regional breakdowns of the construction unemployment rates of each state.

The United States economy, along with the construction economy, struggled through the first quarter as the nation was battered with unusually harsh weather. As of the May 29 U.S. Department of Commerce report, real (inflation-adjusted) gross domestic product (GDP) fell 0.7 percent at a seasonally adjusted annual rate (SAAR). The June 1 construction spending report showed that nominal (current) dollar construction spending was down 0.5 percent (SAAR), but on a NSA basis was up 3.7 percent compared to first quarter 2014.

Most states are showing improvement from a difficult first quarter. This results in some relatively large percentage increases in some of the numbers (e.g., April SA total housing starts jumped 20 percent). However, when taking a longer-term overview and averaging out those fluctuations, the economic picture is one of slow but steady advancement. It seems unlikely there will be any sustained surge in activity anytime soon, but no serious backsliding either. Although greater growth would be preferred, slow and steady beats a decline in activity.