May US Housing Starts Fall 11% 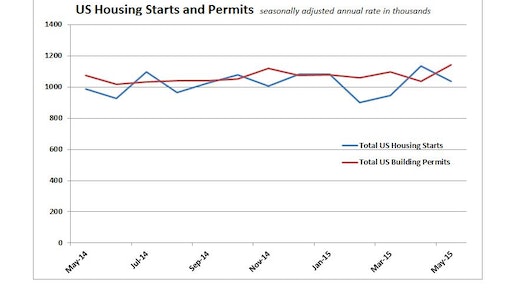 Nationwide housing starts dropped 11.1% to a seasonally adjusted annual rate of 1.036 million units in May from an upwardly revised April reading, according to newly released data from the U.S. Department of Housing and Urban Development and the Commerce Department. Overall permit issuance rose 11.8% to a rate of 1.275 million, the highest level since August 2007.

“The uptick in permits shows our builders are optimistic that more consumers are returning to the housing market,” said NAHB Chairman Tom Woods, a home builder from Blue Springs, Mo. “Even with this month’s dip in production, it should be a solid year for home building.”

“After a strong April, some readjustment in housing production in May was expected,” said NAHB Chief Economist David Crowe. “The starts and permits figures for the second quarter of 2015 are shaping up to be stronger than the first. This upward trajectory is in line with the recently released NAHB/Wells Fargo HMI, which found growing builder confidence in the market.”

Both housing sectors posted production declines this month. Single-family housing starts fell 5.4% to a seasonally adjusted annual rate of 680,000 in May while multifamily starts dropped 20.2% to 356,000 units.

Combined single- and multifamily starts fell in all four regions in May. The Northeast, Midwest, South and West posted respective losses of 26.5%, 10.2%, 5% and 12.5%.