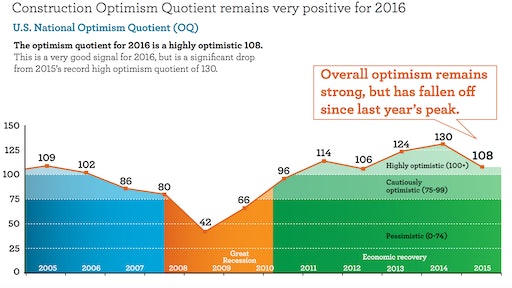 Contractors' and equipment dealers' optimism for 2016 business remains very strong (an Optimism Quotient of more than 100 represents strong optimism for increased local construction activity), but has slipped from 2015's 18-year peak. Scores of 75 to 99 represent cautious optimism. A score below 75 signals that fewer executives say local construction activity will increase than say it will decrease.

The construction industry is entering 2016 less optimistic than in 2015, but overall bullish about local, nonresidential construction activity, according to a recent survey of industry contractors and equipment distributors released today from Wells Fargo Equipment Finance, a subsidiary of Wells Fargo & Company.

The 2016 Construction Industry Forecast presents the results of Wells Fargo Equipment Finance’s 40th year surveying construction industry executives. This year’s survey was conducted October 19 to November 6, 2015. Drawing on the responses of construction contractors and equipment distributors from across the U.S., the forecast reveals trends in the industry and gauges the sentiment of industry leaders on a variety of business topics.

In the 2016 edition, the Wells Fargo Construction Industry Forecast’s Optimism Quotient (OQ) declined to 108 after reaching an all-time high of 130 in 2015. Nevertheless, an OQ score greater than 100 suggests strong optimism for increased local construction activity versus the prior calendar year. Additionally, 62% of executives surveyed believe the construction industry will expand over the next two years, and 52% expect profits to improve this year.

“The construction industry is telling us that overall sentiment remains positive, though not as overwhelmingly positive as the previous year,” said John Crum, senior vice president and national sales manager of the Construction Group at Wells Fargo Equipment Finance. “Expectations for industry growth have flattened out due to market conditions and, in contrast to previous years, there is a very small gap between the confidence levels of equipment distributors and contractors.”

In contrast to previous years, distributor and contractor acquisition intentions are heading in different directions. For 2016, contractors are indicating that their intentions to purchase new construction equipment are on the rise, while on the equipment distributor side, their expectations of new equipment sales are less positive.

Room for Improvement in Rental Pricing?

Rental costs would need to increase by 15% or more for most executives (52%) to consider buying equipment instead of renting. Twenty-five percent said rental rates would need to increase by between 5% and 15% in order to buy instead of rent. To consider buying equipment, contractors need to see consistency in the backlog of jobs and confidence in the local and national economy.

The multiyear trend in equipment rental growth is set to continue in 2016. The majority (63%) of responding equipment distributors and rental companies said they are renting more equipment to contractors than a year ago. However, a smaller percentage (44%) than last year (60%) said they plan to increase the size of their rental fleet in 2016. A significant portion (45%) of distributors expects fleet size to remain the same as in 2015.

Most contractors (55%) believe their equipment rentals will remain at a similar level to last year. A smaller percentage (27%) of those who rented heavy construction equipment last year expects to increase rentals this year, down slightly from 37% in 2015. The need for project-specific equipment (40%), the lack of consistent work to justify equipment acquisition (29%) and the flexibility to return equipment at the end of term (17%) were top reasons for renting equipment.

To learn more, including key opportunities and risks for the industry, download the complete Wells Fargo 2016 Construction Industry Forecast, here.

Construction Hiccups through December to Finish a Strong 2015

2016 Nonresidential Construction Spending May Not Grow as Rapidly as 2015