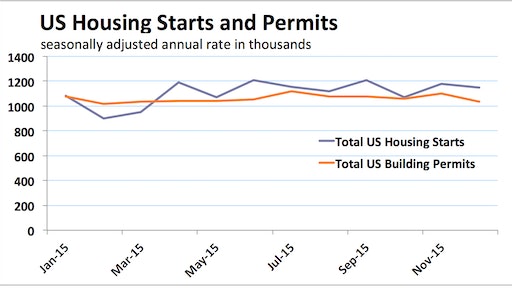 Nationwide housing starts increased 10.8% to 1.11 million units in 2015, according to newly released figures from HUD and the U.S. Commerce Department. Single-family starts posted a yearly gain of 10.4% to 715,000 units.

“These numbers are in line with what our members are telling us that housing markets are improving, but lot and labor shortages continue to be a problem for many builders,” said National Association of Home Builders (NAHB) Chairman Tom Woods, a home builder from Blue Springs, Mo.

“The gradual increase in housing production for 2015 mirrors our forecast and sets the stage for continued growth in 2016,” said NAHB Chief Economist David Crowe. “Strong job growth, rising consumer confidence and pent-up demand will keep housing on an upward trend.”

Regionally in December, combined single-family and multifamily starts rose 24.4% in the Northeast but fell 12.4% in the Midwest, 3.3% in the South and 7.6% in the West.

2016 Forecast for the US Construction Industry - Part 1