2017 sales and revenues are expected to be $36 billion to $39 billion with some signs of recovery, but continued risk and uncertainty 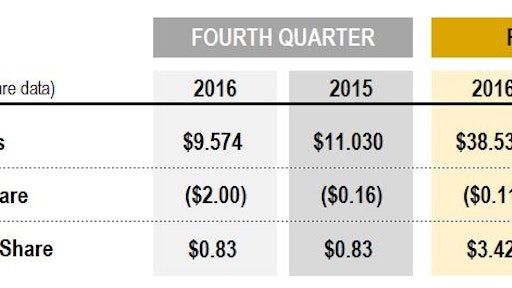 Fourth-quarter 2016 results included three large non-cash charges and higher than expected restructuring costs. These items resulted in a loss for the quarter and were the primary reason results were lower than the outlook provided in October 2016. A discussion of these items – mark-to-market losses for re-measurement of pension and OPEB plans, a goodwill impairment charge, a deferred tax valuation allowance and restructuring costs – and their applicable impact on each period is in Q&A #1 on page 16. Because Caterpillar does not consider these items to be indicative of earnings from ongoing business activities, the table above shows adjusted profit per share that excludes them. The company believes adjusted profit per share provides a useful perspective on underlying business results and period-over-period changes.

“Our results for the fourth quarter, while slightly better than expected, continued to reflect pressure in many of our end markets from weak economic conditions around much of the world. Our team did a great job in the quarter, as they have all year, aligning our cost structure with current demand while preserving capacity for the future. I’m confident we are focusing on the right areas: controlling costs, maintaining a strong balance sheet and investing in the key areas important to our future,” said Caterpillar Chief Executive Officer Jim Umpleby.

Caterpillar is seeing positive signs that could be early indications of modest recovery in several of businesses.

Resource Industries – Commodity prices at higher levels than a year ago, along with sequential improvements in parts sales in each of the last three quarters and improvements in quoting and order activity in the fourth quarter, suggest that mining-related sales may have bottomed.

Construction Industries – Sales in China began recovering in 2016; sales in Europe seem to have stabilized and could improve some in 2017; and sales in Brazil, which are off their peak by over 80 percent, could improve if the Brazilian economy begins to recover from recession.

Energy & Transportation – Gas compression remains strong, and Caterpillar has a solid backlog for turbines. If oil prices rise modestly and stabilize, it would be positive for the businesses that support drilling and well servicing.

Prospects for tax reform and an infrastructure spending bill in the United States are encouraging. While these initiatives would likely be a solid positive for many of Caterpillar’s businesses, it would not expect to begin to see meaningful effects of these changes until sometime in 2018.

Resource Industries – While quoting interest in mining products has improved, Caterpillar is expecting miners’ capital spending to be about flat in 2017 after several years of decline. Sales of some large construction equipment within Resource Industries are likely to be down in 2017, compared with 2016.

Construction Industries – North America and EAME are the most concerning regions. While better economic growth and increased infrastructure spending may be on the horizon, the availability of used equipment has negatively impacted sales in North America during 2016 and Caterpillar expects some negative impact in 2017. It expects sales in Africa/Middle East to be down again in 2017 due to overall economic weakness and continued pressure on economies that rely on oil revenues to drive economic growth. In addition, continuing uncertainty related to Brexit remains a concern in Europe.

Energy & Transportation – Rail remains challenged with low traffic volume and a significant number of idle locomotives. Additionally, weakness in shipbuilding is expected to be negative for the marine-related sales; power generation sales are projected to remain weak; and industrial engine sales to original equipment manufacturers are expected to be lower than 2016.

2017 Outlook – Sales and Revenues and Profit

Caterpillar expects profit per share of about $2.30 at the midpoint of the sales and revenues outlook range. Excluding restructuring costs of about $500 million, the company expects adjusted profit of about $2.90 per share at the midpoint, which reflects decremental operating profit pull through of about 30 percent from 2016.

Caterpillar’s revenue fell 23%; U.S. construction forecast to drop 2% to the end of 2020 and 3% next year; materials, equipment and subcontractor labor prices fell for the 8th straight month
November 12, 2020
Follow Us