Construction Backlog Takes a Step Back in September

ABC's Construction Backlog Indicator fell to 8.9 months in September 2019 even as the infrastructure segment rose nearly 14% to 11.8 months 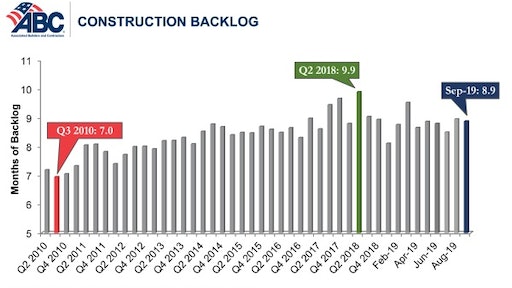 Associated Builders and Contractors (ABC) reported its Construction Backlog Indicator (CBI) fell to 8.9 months in September 2019, down 0.1 months or 0.8% from August 2019, when CBI stood at nine months.

“Backlog associated with the infrastructure segment rose massively in September to 11.8 months, a nearly 14% increase,” said Basu. “State and local government finances continue to be buoyed by an economy producing plenty of jobs, higher incomes, a sturdy consumer sector, a booming stock market and rising property values in much of the nation. Among other things, this produces greater income, sales and property tax collections, which in turn increases funds available for publicly financed construction. Incredibly low interest rates help state and local governments leverage improved cash flow into support for substantial projects, including in categories such as water supply, transportation and public safety.

“Predictably, the largest monthly decline was observed in the heavy industrial category,” said Basu. “Many economists agree that the nation’s manufacturing sector is weakening. Investment among energy suppliers has also been hampered recently by a combination of low and volatile energy prices, geopolitical events and uncertainty regarding the future regulatory environment. In addition, commercial construction has also been weakening, as many investors are concerned about a slowing economy, excess supply in certain commercial segments and rising costs of construction service delivery given the shortage of skilled workers.” 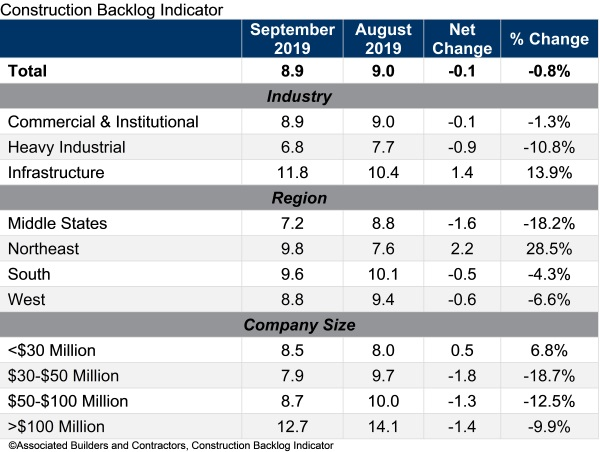 Grant Mackay Company encounters the various construction-durability standards of several decades, bringing down the concourses, terminals and a parking garage at the Salt Lake City International Airport
July 16, 2021
Follow Us