Nationally, commercial and multifamily starts were up 1% in 2019 at $227.5B; the Top 10 metropolitan areas gained 8% during the year 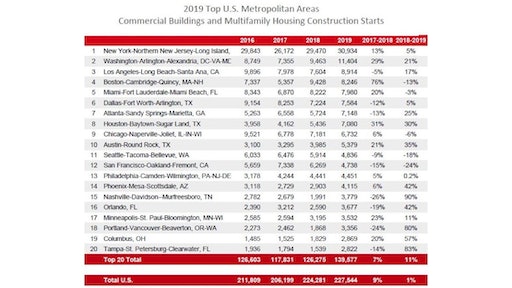 The value of commercial and multifamily construction starts in the Top 20 metropolitan areas of the U.S. gained 11% in 2019, reaching $139.6 billion according to Dodge Data & Analytics.

Nationally, commercial and multifamily starts were up 1% in 2019 at $227.5 billion. The Top 10 metropolitan areas gained 8% during the year, with seven of the ten reporting year-over-year gains. In second-tier metropolitan areas (those ranked 11-20), gains in commercial and multifamily starts were stronger at 17% with eight of these 10 also posting growth.

The New York metropolitan area was once again the largest market for commercial and multifamily starts at $30.9 billion. However, New York’s rate of growth eased in 2019 to 5% from a 13% gain in 2018. The Washington, DC area held on to second place in 2019, posting an 18% gain to $11.4 billion. The Los Angeles metro jumped from fifth place in 2018 to third in 2019 due to an 17% increase that brought the value of commercial and multifamily starts to $8.9 billion.

For the second-tier metro areas ranked 11-20, the seven posting gains were:

The ten second-tier metropolitan areas accounted for 17% of U.S. commercial building and multifamily starts, up from 15% in 2018.

"Commercial construction starts continue to be the bulwark of U.S. construction activity as strong demand for office and warehouse buildings pushes the value of construction to higher levels,” stated Richard Branch, chief economist for Dodge Data & Analytics. “Multifamily starts, however, are past their peak and have entered cyclical decline. The growing divide however between the larger and smaller metro areas was stark in 2019. While commercial and multifamily starts in the top 20 metro areas in the country moved 11% higher in 2019, those metros ranked 21-50 lost 7%,

“For 2020 multifamily construction starts are likely to continue lower as the declines broaden to more and more metropolitan areas. Meanwhile commercial starts have posted gains for nine consecutive years, but a slowing economy in 2020 will likely lead to fewer large value projects, causing national starts to pull back from their 2019 level.”

Commercial building and multifamily starts in New York, NY, gained 5% in 2019 reaching $30.9 billion, following an increase of 13% in 2018. Multifamily activity was the main driver behind the increase moving 9% higher over 2018. The largest multifamily building to break ground in 2019 was the $629 million Pacific Park Mixed-Use project in Brooklyn. Also getting underway in 2019 was the $600 million 601 W 29th Street building and the $500 million second phase north tower of the Hunters Point South. Commercial starts, however, were essentially flat in 2019 with gains in warehouses and parking structures offsetting declines in office, hotel, and retail buildings. The largest commercial structures to break ground in 2019 were the $1.1 billion TSX Broadway Hotel, a $400 million consolidated rental car facility at Newark International Airport (recorded in the Dodge historical starts database as a parking structure), and a $300 million warehouse on Staten Island.

In Washington, DC, commercial and multifamily building stars moved 21% higher to $11.4 billion on the heels of a 29% gain the prior year. Commercial building starts were impressive during the year, increasing 39% from 2018 due to large gains in office and parking structures. The three largest commercial projects to break ground in 2019 were all office buildings — the $304 million Reston Gateway Block A, and two CloudHQ data centers — a $300 million building in Ashburn, VA, and a $258 million facility in Manassas, VA. Multifamily starts waned in 2019, however, losing 1% from a very strong 2018 when multifamily starts rose 28%. The largest multifamily structures to break ground in 2019 were the $250 million Eckington Yards building, the $240 million Hoffman Town Center Buildings 4&5, and the $175 million Press House at Union District.

Los Angeles, CA, commercial building and multifamily starts increased 17% in 2019 to $8.9 billion following a 5% decline the prior year. Commercial building starts rose 56% in 2019, with strong levels of activity seen in parking, office, hotel, and warehouse structures with retail being the only commercial sector to post a decline. The largest commercial project to break ground was a $1 billion consolidated rental car facility at Los Angeles International Airport. Also starting in 2019 was a $450 million Google office building and a $209 million passenger parking structure, also at Los Angeles International Airport. On the multifamily building side, starts slipped back 14% in 2019 — marking the third consecutive annual decline in the sector. The largest multifamily structures were the $950 million Grand Avenue Mixed-Use Building, the $515 million Brookfield Mixed-Use Tower, and the $300 million 2900 Wilshire Blvd Apartments.

The Boston, MA, metropolitan area saw commercial building and multifamily starts drop 13% in 2019 to $8.2 billion. Commercial starts were robust in Boston for the second year in a row, rising 13% due to growth in the office sector led by the $309 million Bulfinch Crossing Tower 1. Also starting in 2019 was the $282 million One Post Office Square addition and renovation as well as the $200 million Volpe Transportation Center. Multifamily starts declined 36% on the heels of a 74% gain in 2018, with the $314 million 40 Trinity Place Residences leading the way. Also starting was the $250 million Assembly Row housing project and the $170 million Alta XMBLY Block 23 project.

Commercial building and multifamily starts in Miami, FL, rose 20% in 2018 but pulled back 3% in 2019 to $8.0 billion. Commercial starts rose 6% due to gains in hotel and office starts with the $491 million Omni Hotel and the $300 million Royal Caribbean Headquarters Campus starting. Also starting was the $98 million 830 Brickell Office Tower. Multifamily starts dropped back 11% in 2019, following a robust gain of 44% in 2018. The largest multifamily building to get underway was the $300 million One West Palm Mixed-Use Building, along with the $175 million PMG X Biscayne Apartments and the $165 million The Link at Douglas Apartments.

Dallas, TX, commercial building and multifamily starts rose 5% in 2019 to $7.6 billion following two years of decline. Commercial starts were the strength in the market, increasing 31% on the back of large gains in office and hotel buildings. The $250 million American Airlines Hospitality Center was the largest commercial project to get started just ahead of a $225 million Google Data Center and the $200 million Keurig/Dr. Pepper Office Building. On the flip side, multifamily starts tumbled 25% following a 29% gain the prior year. The largest multifamily starts in 2019 were the $84 million Crossing Mixed-Use Building followed by the $73 million Sovereign at Twin Creeks Apartments and the $68 million Alexan at the Point Apartments.

The Atlanta, GA, metropolitan area saw robust gains in commercial and multifamily construction in 2019 with a 25% gain to $7.1 billion, following a 13% drop the prior year. Commercial construction activity was strong with all sectors seeing increases — with office and warehouse structures leading. The $550 million Norfolk Southern Headquarters was the largest commercial structure to break ground, but the year also saw the start of the $470 million 40 West 12th Street Office Building and a $200 million Amazon Distribution Center. Multifamily starts; however, posted a 13% decline falling for the second consecutive year. The largest multifamily structure to start was the $285 million Midtown Union Mixed-Use Building, along with the $130 million 3rd & Spring Student Apartment Tower and the $93 million Ascent Peachtree Apartments.

With gains in commercial structures leading the way, Houston, TX, commercial and multifamily construction rose 30% in 2019 to $7.1 billion — marking the third consecutive annual increase. Total commercial starts rose 35% in the year with all sectors seeing gains. The $350 million Hines Office Tower was the largest commercial structure to start during the year, ahead of a $130 million Dollar Tree Distribution Center and an $85 million Costco Distribution Center. Multifamily starts increased 23% in 2019 with the $250 million Allen Thompson Hotel and Residences being the largest project to start. Also starting in 2019 was the $200 million Preston High-Rise Apartments and the $120 million San Felipe Residential Tower.

In Chicago, IL, commercial building and multifamily construction rose 6% in 2018; but pulled back 6% in 2019 to $6.7 billion. Commercial activity slipped 25% in 2019 following a 38% gain in 2018. The only sector to see a gain in 2019 was commercial warehouses due to the start of the $170 million Project Jupiter Warehouse built by Seefried Properties Inc. Also starting was the $170 million 167 Green Street Office Building and the $153 million Exchange 55 Industrial Development. The overall decline in 2019 for Chicago came despite a 22% increase in multifamily starts. The largest multifamily building to break ground in Chicago (and indeed in the entire U.S.) in 2019 was the $850 million One Chicago Square Apartments, with work also getting underway on the $470 million 1000M South Loop Condos and the $350 million Lakeshore East–Cascade Apartment Tower #2.

Austin, TX, commercial and multifamily construction received a boost from both the commercial and multifamily sectors in 2019, with the total increasing 35% from 2018 to $5.4 billion following a 22% increase in 2018. Multifamily starts rose 48% in the year, with the $320 million Sixth & Guadalupe Residential Tower starting along with the $150 million Bowen Residential Tower and the $150 million Alexan on 11th Apartments. On the commercial side, starts rose 26% in 2019 led by the office sector. The largest commercial structure to start was the $375 million Block 185 @ Green Water facility along with the $263 million George HW Bush Office Building and the $250 million Apple Corporate Campus.