Total construction starts fell 7% in July due to a significant pullback in the nonbuilding segment. 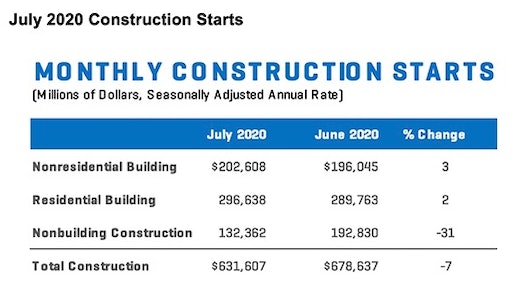 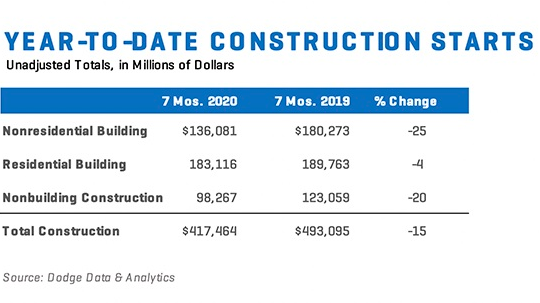 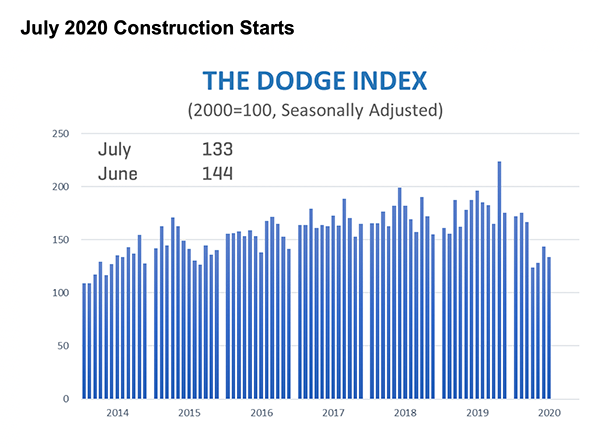 Dodge Data & Analytics“The July decline in construction starts should not be interpreted as a setback on the sector’s road to recovery,” stated Richard Branch Chief Economist for Dodge Data & Analytics. “The gains in the nonresidential and residential sectors mirror the general overall improvements in the economy. The drop in public works could represent a settling back in activity following a solid spring in which some projects broke ground earlier than expected to take advantage of the fewer cars on the road during the COVID-19 shutdown in March and April.

"While the recovery progresses, the Congressional impasse preventing the extension of enhanced unemployment insurance benefits and small business loans included in earlier fiscal support packages casts a pallor over the future trajectory for growth," he continued. "Furthermore, the gain in nonresidential building starts was entirely due to strength in the Northeast and West regions, with starts in the South Atlantic and South Central regions down sharply during the month. While one month doesn’t constitute a trend, the potential risk to construction from the rising number of COVID cases in these regions is significant.”

Nonbuilding construction fell 31% in July to a seasonally adjusted annual rate of $132.4 billion. All categories within nonbuilding dropped during July. Utilities/gas plants fell 58% following a very large gain in June. Starts in environmental public works and the miscellaneous nonbuilding sector each lost 27%, while highways and bridges dropped 25%.

The largest nonbuilding project to break ground in July was the $1.0 billion Whistler Natural Gas Pipeline, which stretches 450 miles from Waha TX to Agua Dulce TX. Also starting during the month were the $421 million widening of Interstate 26 from Little Mountain SC to Irmo TX and the $301 million interchange improvements along State Highway 12 near Dallas TX.

Nonresidential building starts increased 3% in July to a seasonally adjusted annual rate of $202.6 billion. Commercial starts gained 13% led by gains in hotels, warehouses, and office buildings. Institutional starts rose 2% due to an increase in education activity, while manufacturing starts lost 52% during the month.

The largest nonresidential building project to break ground in July was the $400 million Mickey Leland International Terminal at George Bust Intercontinental Airport in Houston. Also starting were the $377 million Hyatt Regency Hotel at the Salt Lake Convention Center in Salt Lake City UT and a $337 million renovation of a terminal building at Los Angeles International Airport.

Residential building starts rose 2% in July to a seasonally adjusted annual rate of $296.6 billion. Multifamily starts increased 11%, while single family starts declined by less than one percent. The largest multifamily structure to break ground in July was the $500 million 101 Lincoln Ave mixed-use project in the Bronx NY. Also starting was the $275 million Figueroa Centre mixed-use complex in Los Angeles CA and the $200 million first phase of the Society Orlando Apartments in Orlando FL.