National nonresidential construction spending fell 0.1% in August for a total of $814.3 billion for the month. 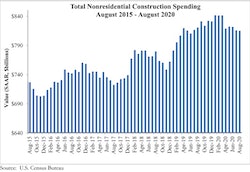 National nonresidential construction spending fell 0.1% in August, according to an Associated Builders and Contractors analysis of data published by the U.S. Census Bureau. On a seasonally adjusted annualized basis, spending totaled $814.3 billion for the month.

“While overall construction spending rose significantly in August, much of that was attributed to surging single-family housing starts,” said ABC Chief Economic Anirban Basu. “The picture is very different in a number of nonresidential construction categories, especially in segments that have been disproportionately impacted by the pandemic, such as lodging and office, which are down 12.1% and nearly 9% year over year, respectively.

“The good news is that nonresidential construction spending momentum remains apparent in a number of public segments,” said Basu. “On a monthly basis, construction spending was up in the water supply, highway/street and educational categories. Spending in the public safety segment is up nearly 40% compared to the same time last year.

“Absent an infrastructure-oriented stimulus package, the likely trajectory of nonresidential construction spending does not appear especially bright,” said Basu. “Commercial real estate fundamentals are poor, with elevated vacancy rates and tighter lending conditions, rendering it probable that private nonresidential construction spending will continue to dip. State and local finances have been pummeled by the pandemic, resulting in less support for the next generation of public projects. Many contractors report declining backlog, according to ABC’s Construction Backlog Indicator, and fewer opportunities to bid on new projects. With winter coming and infection rates poised to rise, the quarters to come are shaping up to be challenging ones.” 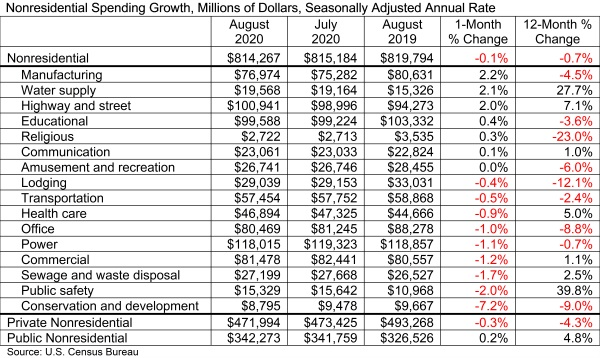