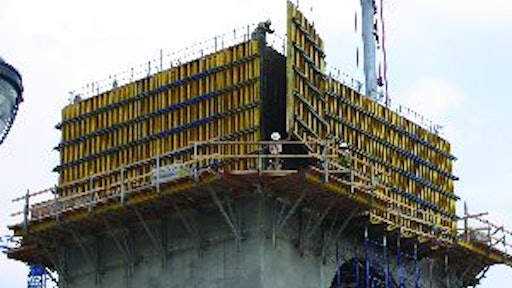 From their genesis, monuments are designed to become icons and gathering places for generations to come. Therefore, the task of creating a new national monument is one that demands perfection from its design and construction team. The original idea for what is now under construction in Atlanta as the Millennium Gate was first conceived in the late 1990s by designer and philanthropist Rodney Mims Cook, Jr. to add character to Washington, D.C.'s Commodore Barney Circle. When that effort stalled, Cook turned his efforts toward his home city of Atlanta, spearheading the effort to create a classical monument to mark the passing of the millennium.

Following renovation of an industrial brownfield into a thriving neighborhood now known as Atlantic Station (undertaken with the goal of creating a prime location for the monument in downtown Atlanta), the drawings from the original design competition were adapted to create plans for a 73-ft.-tall classical arch flanked by two 24-ft.-tall pylons. The pylons will be topped with sculptures of the Greek goddesses of peace and justice, and the exterior of the arch will feature a façade by sculptor Alexander Stoddardt that tells the story of mankind's accomplishments over the past 2,000 years. Beneath the arch (which takes its cues from such famous monuments as the Washington Arch in New York City and the Wellington Arch in London) will be a public park, and the interior will house gallery space showcasing art and history exhibits. Two six-story elevator and stair shafts will take visitors to the arch's roof terrace and conservatory.

Construction on the $18 million monument officially began in 2005, when the two Greek statues were shipped from Savannah via a Percheron-drawn caisson, which was led by a brass band and bagpipers to the construction site. To construct the concrete substructures for the arch and pylons, the general contractor - New South Construction - selected Precision Concrete Construction. To create such a complex project, Precision Concrete knew a wide variety of formwork would be required, so the contractor turned to Doka USA to supply the project with six of its proprietary formwork products.

Precision Concrete chose to use Doka's Top 50 formwork system at the Millennium Gate project for several reasons. "The project requirements were to provide an as-cast finish inside the tower and to achieve American Concrete Institute (ACI) vertical tolerance for walls less than 100 ft.," said John Galasso, Sr., field operations manager for Precision Concrete. "Precision's project management team felt that the Top 50 system with the MF 240 platform system would give us the best chance to meet the project requirements and to provide our employees with the safest working environment. Precision Concrete prides itself on providing the highest quality and service to our clients. We know from our continuing relationship with Doka that they are capable of helping us fulfill these goals."

To provide the Class A concrete finish required by the project's considerable exposed concrete, the contractor used 8,000 sq. ft. of Doka's Top 50 forming system to create the shear walls for the elevator and stairs. Because of the tight jobsite conditions (the monument is located on the edge of a park adjacent to Atlantic Station), Doka preassembled all of the Top 50 gangwork and shipped it to the jobsite. Because the Top 50 is so lightweight, the assembled forms were able to be placed with a small portable tower crane. Using the transition pieces attached to the end of the Top 50 gangs in conjunction with Framax bias-cut stripping corners, the contractor was able to keep the inside formwork gangs plumb and square throughout all of the vertical lifts.

When the $18 million Millennium Gate opens in spring 2008, it will be the largest classical monument built in America since the Jefferson Memorial opened in Washington, D.C., in 1943. Visible from the city's major highways, the monument will become an iconic touchstone not just for the people of Atlanta but also for all those who witness it.