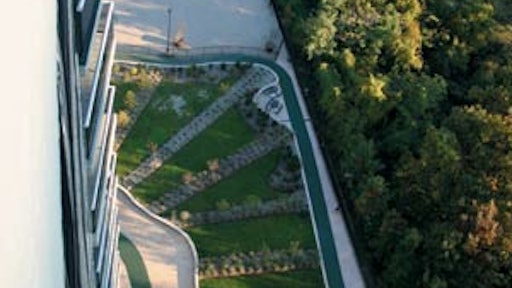 Located along the cliffs of the Hudson River, in a wall of high-rise condominiums equipped with million-dollar views of the New York City skyline, sits the Atrium Palace.

Surrounding the Atrium is a 153,200-sq.-ft. outdoor concrete plaza area sitting atop a two-level parking garage. The plaza deck is home to tennis courts, a pool, basketball courts, a children’s play area and a running track. Below the deck, the parking garage accommodates approximately 700 vehicles. Although the plaza and garage were designed to complement the sophisticated elegance of the interior living space, over time, these areas have suffered severe deterioration.

The plaza deck and parking structure surrounding Atrium Palace were built on cast-in-place concrete foundations stemming from solid bedrock. The parking structure was constructed of cast-in-place concrete reinforced by 0.5-in. unbonded monostrand post-tensioning with mild steel reinforcement in the temperature directions. The post-tensioning system created long spans in the garage to meet the parking requirements. Vehicles accessed the garage through two lower-level entrances and by a ramp to a smaller parking area on the plaza level. Overall, the parking garage encompassed a gross area of approximately 200,000 sq. ft.

Composed of a structural deck with a sheet-applied waterproof membrane, the plaza deck sits on top of the underground parking garage. A thin, unreinforced 3-in. topping slab served as the plaza deck’s wearing slab, and expansion joints were located midway between the plaza deck/parking garage. Before restoration, the plaza deck’s amenities included tennis courts, planter pots, a parking area and vast open concrete deck space, as well as a cast-in-place concrete pool supported by the garage beam infrastructure.

In 2003, maintenance staff for the Atrium Palace first noticed something was wrong and called O&S Associates, an engineering firm, because of visible and extensive shear cracking in the column corbels and beams supporting the parking garage. Failed post-tensioning tendons also were visible throughout the parking garage. Spalls, both horizontal and overhead, were identified in various locations in the garage area. Over the garage, the entire plaza deck topping slab was severely cracked and heaved. Water was leaking through the waterproof membrane to the lower garage levels. The pool also was leaking water into the lower level of the garage, and the plaza deck drainage system was clogged and blocked. Expansion joints had failed and created huge gaps in the slab. The amenities also had deteriorated, adding to the overall effect of these damaged areas.

O&S Associates contacted Structural Preservation Systems to assist with the repair. SPS was interviewed by the board of directors of the condo association and selected for the project. Although the project cost was certainly important and carefully monitored, it was not the deciding factor in choosing a contractor, as SPS was not the lowest bidder. Rather, SPS was hired based on their expertise, resources, project management and financial stability.

Completing the restoration while ensuring ongoing facility operations posed a significant challenge on this project. To ease the nuisance on residents, the owner sought a fast-track solution that spanned 18 months because of limited functionality during the winter season. As such, the condo association integrated a liquidated damage clause in the contract to ensure the project was completed on time.

From project onset, SPS and the owner worked together to develop a complex phasing plan to accommodate car displacement in the parking garage. In total, the project encompassed more than 50 work items, including 32,000 sq. ft. of reinforced concrete topping slab, 153,200 sq. ft. of plaza waterproofing, the installation of a new pool liner and new basketball courts, and post-tensioning beam repairs. Items had to be scheduled into specific phases and sequenced so that only 150 cars were displaced at any given time and the flow of traffic through the garage remained unimpeded at all times.

The plan included maintaining a traffic lane for removing debris and moving equipment, labor and supplies — an area that eventually became the last phase of construction. The sequencing was similar to a hallway connecting several rooms. SPS moved from room to room, or phase to phase, through interior doors until phases were completed. The lane used for debris removal and labor/material movement was then repaired. No two phases were alike — each had its own size and features. The uniqueness of each phase and the subsequent planning required to sequence each one proved to be the most daunting aspect of the project. A tremendous amount of planning was required to ensure that the correct material, labor and, in some cases, subcontractors, were on-site at the required time. Although other methods of repair were considered, all were discounted as they would have impeded the flow of work and impacted the schedule. The method chosen allowed for multitasking of the work while maintaining parking traffic flow, parking and residential use of the surrounding facility.

With this plan in place, crews began shoring the upper plaza deck level around the compromised corbels and beams to allow demolition equipment to remove the deteriorated topping slab. Crews used jackhammers, breakers and saws to remove the unbonded concrete. Operating constantly around the demolition, skid steers removed debris so the slab would not be overloaded.

Upon completion of each phase of topping slab demolition, the membrane was removed using hydrodemolition equipment. The clean, exposed structural deck was then hammer-sounded and chain-dragged to determine the extent of deterioration. Any spalls and areas of delamination that were found were repaired in accordance with ICRI guidelines.

The plaza structural deck was then waterproofed using reinforced 180-mil hot-applied modified bitumen membrane. Protection board of 1/8-in. thickness was placed in all areas scheduled for new concrete topping. In the parts of the plaza that would support planters, SPS used 1/4-in. protection board. A drainage board was placed prior to placement of the concrete topping slab. Subsurface drains were installed in low areas of the structural deck to allow proper drainage from the new topping slab. New expansion joint headers were constructed and tied into the structural deck. A gland was installed in the concrete headers to allow for movement and waterproofing integrity. To ensure the quality of the repairs, each phase of the waterproofing was water-tested for 72 hours prior to progressing to the next section.

The topping slab was reconstructed using a combination of reinforced integral colored concrete and stamped concrete. The contractor created several mock-ups to allow the owner to choose the most appropriate pattern and design, and then installed 24,800 sq. ft. of stamped concrete and 8,200 sq. ft. of colored concrete. Concrete was placed in phased areas to allow for proper isolation joints. With strong attention to reinforcing steel placement, control joints, concrete quality control and good concrete placement practice, the concrete topping slab was completed with no visible cracks.

Concurrent with each phase, repairs were also being made to the parking garage below deck — detailed scheduling was required to coordinate the work going on simultaneously above and below ground. In the underground garage, deteriorated post-tensioning tendons were repaired using splice chucks and couplers. In areas where end anchors had failed and could not be accessed, structural steel supports were erected. Deteriorated corbels and beams also were repaired using structural steel supports, and the deck was waterproofed using a low-odor traffic-bearing urethane membrane. Although it was a low-odor system, ventilation was required during application of the membrane because each area was self-contained. This was particularly crucial in the corners of the garage where air did not flow freely. As such, SPS used heavy-duty fans to maintain proper airflow for the safety of the crew and tenants.

Additional amenities for each phase or footprint were constructed before work moved to another area. In lieu of removing the pool’s marbelite coating, SPS decided to install a pool liner. Pool plumbing was then replaced, and concrete brick pavers were installed around the pool patio area. Three new state-of-the-art cushioned tennis court surfaces with 12-ft.-high fences also were installed. Other amenities included a cushioned running track with integrally colored surfaces that was constructed around the entire perimeter of the plaza deck and basketball courts.

As a final touch to the newly restored plaza area, concrete block was installed at the perimeter of the new planter areas, which were irrigated by in-ground sprinkler systems. This step completed the overall restoration and enhancement of the plaza.

Because of the intensity of multiple operations, daily safety measures and communication were necessary. Safety systems were needed to protect the many workers on the job, as well as the curious public. SPS and the owner worked together to keep the residents and guests of the condominium complex informed through signs and notices. For example, representatives of the condo board were included in a weekly construction progress meeting. The board members then relayed this information to residents through in-house closed-circuit television messages, and many watched the construction progress from their balconies. The property manager also kept his maintenance staff regularly updated so they were able to answer questions and help maintain the safety of the project. Perimeter protection was checked several times a day to ensure that no one wandered into the area. In addition, workers were required to participate daily in a Jobsite Safety Analysis for each task performed that day. The JSA helped the work crew identify all hazards associated with each task and implement proper safety measures.

Bob Pirro is the branch manager of the New York branch of Structural Preservation Systems.