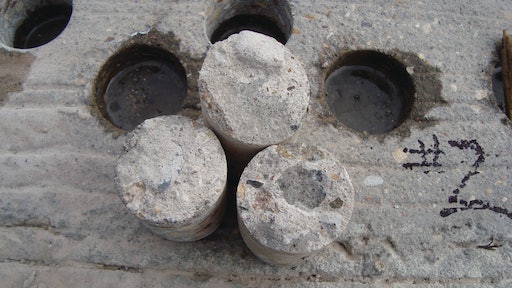 In-place concrete strengths represented by cores are typically less than lab-cured cylinder strengths due to field factors like consolidation and curing.

When compressive strength tests of laboratory-cured cylinders fail to meet the specified acceptance criteria, core tests are commonly used to verify the strength and to obtain acceptance of the in-place concrete. While the process of core testing may seem straightforward, there are many details contractors must consider to achieve accurate results.

As discussed in “Avoid the False Alarm for Low-Strength Concrete” (January 2013 Concrete Contractor), ACI 318 Building Code Requirements for Structural Concrete1 requires that no strength test (average of two or three laboratory-cured cylinders) falls below the specified strength (fc’) by more than 500 psi when fc’ is 5,000 psi or less, or falls below fc’ by more than 10 percent when fc’ is more than 5,000 psi. If any strength test fails this criterion, the building code requires an investigation of the low-strength test results to ensure the load carrying capacity of the structure has not been jeopardized. Frequently, low-strength concrete investigations include core testing of the questionable concrete to assess the strength and acceptability of the in-place concrete.

Drilled cores and laboratory-cured cylinders are different and used for different purposes. Laboratory-cured cylinder strengths represent the quality of concrete as delivered which is influenced by concrete batching, mixing and transportation, sampling, making and curing of cylinders, and testing. Core strengths represent the quality of the in-place, or in-situ, concrete which in addition to concrete batching, mixing, transportation and testing is influenced by jobsite practices such as placing, consolidating and curing. Strengths of cores are also influenced by the drilling operation, core handling and moisture conditioning before testing. Due to these differences, in-place concrete strengths represented by cores are typically less than cylinder strengths.

Another major reason why core strengths are typically less than cylinder strengths is less favorable curing conditions (i.e., moisture and temperature conditions) for strength development of in-place concrete as compared to the “standard” cure requirements for laboratory-cured cylinders. For concrete mixtures with strengths less than 5,000 psi, ASTM C314 requires cylinders to be stored up to 48 hours (initial curing) in a temperature range from 60 to 80° F with the balance of the 28-day cure period at a temperature of 73.5 ±3.5° F. For specified strengths of 6,000 psi and higher, the initial curing temperature is 68 to 78° F. In most cases, curing temperatures for in-place concrete is variable and less favorable than “standard” cure temperatures resulting in lower strengths for cores as compared to cylinders. See Figure 1.

Strengths are affected by the location and drilling orientation of cores relative to the structural element. In general, concrete at the bottom of an element is stronger than concrete near the top of an element or near the top of a lift because of the effects of bleeding and settlement of the coarse aggregates. Bleed water decreases strength in the upper portions of walls, columns, beams and slabs by increasing the water to cementitious materials (w/cm) ratio. Figure 2 illustrates the top-to-bottom strength variation for a wall and also shows concrete is typically weaker along edges of a unit of deposit or formed joints.

As shown in Figure 3, bleeding creates a weak cement-aggregate bond, or planes of weakness, under coarse aggregate particles. Planes of weakness are always horizontal in concrete. When the planes of weakness are located parallel to the applied load (P) of the testing machine as shown for Core B (drilled perpendicular to the casting direction) strength can be reduced 10 percent or more as compared to Core A (drilled parallel to the casting direction). ASTM C42 requires these factors to be considered when planning a core test program.

Always exercise care when drilling and handling cores, especially to preserve the moisture content of cores. The amount and distribution of moisture in cores will affect strengths. ASTM C42 requires special handling with regard to moisture preservation and conditioning both in the field and in the lab before testing. In the field, wipe off drill water from the cores upon extraction and allow the surface moisture to evaporate (up to one hour). Then place cores into separate plastic bags and seal them to prevent moisture loss. In the lab, ASTM C42 requires a testing facility worker to store cores in sealed plastic bags for at least five days after end preparation to reduce moisture gradients.

As with most construction activities, advanced planning is required for a successful coring operation and low-strength investigation. When possible, minimize the number of cores removed from the structure to avoid the Swiss cheese appearance and remember that proper repair of the core holes is part of the investigation too.

Petrography: What It Can and Cannot Do