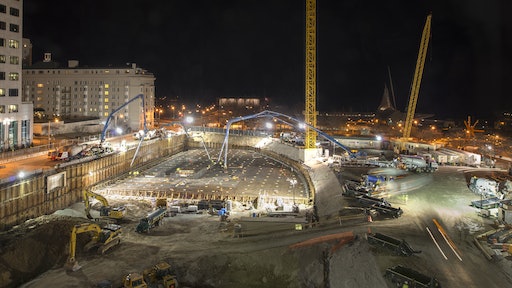 The pour began at 7:00 p.m. on a Friday night and ended just after 12:00 a.m. on a Sunday, with crews working continuously to complete the entire foundation for the project.

Placing 9,200 cubic yards of concrete over a 29-hour period for the foundation of the new Northwestern Mutal Tower and Commons in downtown Milwaukee, Wis.

In the spring of 2015, four Putzmeister truck-mounted boom pumps, 50 ready-mix trucks and more than 250 construction workers placed 9,200 cubic yards of concrete over a 29-hour period, setting a record for the largest continuous concrete pour in Wisconsin's history. The concrete was for the foundation of the new Northwestern Mutual Tower and Commons (Northwestern Mutual) in downtown Milwaukee, Wis.

Once complete, Northwestern Mutual’s new 1.1 million-square-foot, $450 million project will consists of a 32-story office tower that will adjoin a two-block-long, three-story space known as The Commons, and will expand the company’s existing downtown Milwaukee campus.

Working with the project’s general contractor, Gilbane|CG Schmidt, a joint venture between Gilbane Building Co. and locally based CG Schmidt Inc, Northwestern Mutual is partnering with multiple local small business enterprises and a Milwaukee-area workforce on the initial phase of the project to employ nearly 1,000 local construction workers. Gilbane|CG Schmidt relied on the pumping expertise of Gordy’s Concrete Pumping Service (Gordy’s) out of nearby Sussex, Wis., to place the concrete using pumps from Putzmeister America, Inc. Nuvo Construction Co. (Nuvo), out of Milwaukee, is providing concrete for the massive project.

The large mat pour at Northwestern Mutual’s site took months of planning and coordination between all parties involved. Nearby streets and sidewalks were closed from Thursday morning through Tuesday evening surrounding the weekend pour. To reach all four corners of the 38,500-square-foot foundation, Gordy’s set up four Putzmeister truck-mounted boom pumps.

Gordy’s had two additional Putzmeister pumps nearby to serve as back-ups in case the crew encountered any mechanical issues, and Putzmeister provided a service truck with a service technician on site for the pour.

“The four pumps were able to easily reach every corner of the jobsite,” said Mike Salmon, manager for Gordy’s. “While we were prepared for any break-downs with extra machines on hand, we were really pleased that we didn’t actually have to use them. It was also great to have a Putzmeister service technician right on site in case of any issues, but, fortunately, we had absolutely no problems with the pumps through the duration of the long pour.”

The pour began at 7:00 p.m. on a Friday night and ended just after 12:00 a.m. on Sunday morning, with crews working continuously to complete the entire foundation for the project. In all, it required 920 concrete truck trips, with Nuvo dispatching material from three of its nearby plants.

“Gordy’s and the Putzmeister equipment performed above and beyond what we expected, given 29 hours of straight pumping,” said Kies. “We were pleased that there were no issues with the equipment whatsoever.”

A unique challenge with a continuous pour of this size is ensuring the concrete cures as one monolithic piece to eliminate the risk for cold joints. Several aspects of the mix design helped address this issue:

The combination of all of these special components resulted in a tough, 6,000-pound concrete mix. Pumping the tough mix required the machines to work at higher pressures — up to 4,060 psi — throughout the 29-hour pour.

“The pumps performed flawlessly using a tough mix and high pressures over a long period of time,” said Salmon. “You really can’t ask for more out of your equipment. Our Putzmeister machines have been proven over the decades and are always reliable.”

With the foundation for the new office building and commons now in place, the crews are getting to work building up to the 550 feet for the 32-story office tower. To pump concrete up to that great height for the decks and walls, Gordy’s will be using a Putzmeister BSA 14000 trailer-mounted concrete pump. In total, Putzmeister equipment will be pumping approximately 50,000 cubic yards of concrete at Northwestern Mutual.

Anticipated completion for the project is slated for 2017.

The factors and considerations concrete contractors should be aware of for placing concrete in cold weather
Sakrete
Jan 18th, 2021

Aquajet offers training opportunities to maximize productivity and safety on the jobsite, as well as provides education options on-site or through its network of facilities across the United States.
Aquajet
Jan 15th, 2021

Cost savings, minimize mistakes, and reducing liability are three of the benefits of a nitrile-core asphalt latex for vapor mitigation. Part two of the Vapor Intrusion Mitigation series.
Land Science, a division of REGENESIS
Jan 15th, 2021

The weakness largely reflected job cuts at restaurants but job losses in leisure and hospitality and in private education were partially offset by gains in professional and business services, retail trade and construction
Jessica Lombardo
Jan 8th, 2021

Downtime is the last thing you want during the season. That's why Wirtgen offers the Machine Rebuild Program. Get your Wirtgen, Vogele, Hamm & Kleemann machines ready for 2021 now.
Jan 7th, 2021

Form-A-Tube allows contractors to instantly construct forms for shoring up pilings with cement. The system builds forms of any size on site, making it easy to use even in remote locations.
Form-A-Tube
Jan 5th, 2021

HTC products, services and solutions will be rebranded as Husqvarna and integrated into the global Husqvarna offering — consolidating its brand portfolio in the surface preparation segment.
Husqvarna Construction Products
Jan 4th, 2021

This Digging Deeper Podcast episode talks about concrete vibration, what it does, why it’s important – and why you want to control the frequency.
Jan 4th, 2021