Homeowner demand for swimming pools constructed using ICF products, leads one manufacturer to create a system that made it economical to build them. 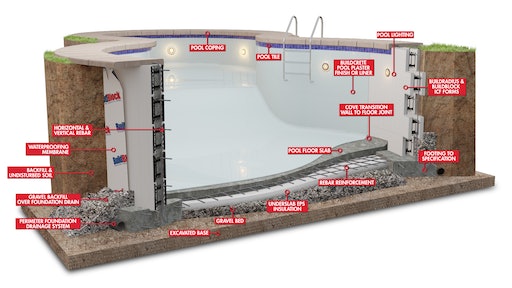 This graphic shows you how ICF swimming pools are put together. The footings are formed and placed first, then the ICF walls. When workers place the concrete in the walls they also cast the floor at the same time.
BuildBlock Insulating Concrete Forms

Insulating Concrete Forms (ICF) has been in the marketplace for several years. Before the collapse of the housing industry in 2008 many homes were built with ICFs made by several different manufacturers. But the ICF movement stalled with the economic downturn and several manufacturers closed their doors. This happened to other concrete home building technologies too and the situation remained this way until the housing market started to pick up. Methods for building concrete homes are slowly coming back now.

Mike Garrett worked for other ICF manufacturers before the housing slow-down but was dissatisfied with the problems and issues related to these products. So in 2004 he decided to start BuildBlock Insulating Concrete Forms in Oklahoma City, Oklahoma. His goal was to create a better product, in part by correcting flaws that he saw in other products. Over time his company has grown and they have added to their product line to accommodate a wider range of design challenges.

Garrett discovered that in the process of building a house with ICF walls (and sometimes floors) some homeowners also wanted swimming pools so he decided to work out a system that made it economical to build them with his ICF product. He also developed a guide for typical installations that included engineering too. Any pool design can be built with his system and these one-of-a-kind pools require separate engineering details.

Why build a pool with ICF’s?

Unlike some swimming pool wall systems ICF walls aren’t dependent on precise excavations. If an excavation is over-dug it doesn’t affect the cost of an ICF pool beyond the backfilling cost after the walls are in place.

Saving pool heating costs is another advantage that ICF pools have. Brian Corder, BuildBlock’s President of Sales and Marketing, says most heat in a swimming pool is lost through the walls and bottom of a pool, the air above is a much poorer conductor of energy. But because both sides of an ICF wall are insulated and insulation boards are usually placed between the concrete and subgrade on the bottom of a pool, less energy is required to heat the water in a pool.

Another advantage is reduced construction time. ICF pools can be built in less time and with less labor than other methods. The system is simple and those with do-it-yourself skills can build the walls of their pools. Placing and finishing concrete on the bottom of the pool still requires skilled finishers though.

How an ICF pool is built

Any shape or design can be economically built with ICFs. BuildBlock specifically offers a line of curved radius forms, making even the most inventive design simple to execute. All pools must be engineered to provide for proper steel reinforcement, but BuildBlock also provides pre-engineered tables for a wide range of depths and configurations. There are many standard plans for pool sizes and shapes available and if you use one of these you are ready for construction.

Excavation is the first step, including footings for under the walls. Corder recommends that in-ground pools should have footings at least 16-inches deep and 20-inches wide, though they may be as much as 58-inches wide to accommodate some soil conditions. Footing requirements will always be dictated by soil compressive strength and local codes. The next step involves forming for the footings and then rebar is added. Rebar reinforcement for the pool bottom is usually tied to the footing too using stirrups.

ICF blocks are assembled to build the pool walls on top of the footings with both horizontal and vertical rebar added as the blocks are assembled—vertical bars penetrating into the footings. Rough plumbing and electrical is installed too, locating fixtures in the foam blocks is easy. High walls require bracing to assure that they remain plumb after concrete is placed but short walls typically don’t need support.

Corder says concrete for walls and floors is typically placed at the same time, placed with a pump or conveyor. BuildBlock recommends 3000 psi rated mixes that include 3/8-inch top-sized aggregates. A typical detail also calls for a cove transition between walls and pool bottom, achieved at the time concrete is being placed. If pool copings are specified to be concrete, they are formed and placed after concrete in the walls is hard.

In order to prevent ground water from damaging the pool structure, BuildBlock strongly recommends that moisture barriers be installed against the ICF blocks on the outside of the walls before they are backfilled. It should shed any water to the gravel below or a perimeter drain.

Either pool liners or plaster finishes can be used to complete the inside of an ICF pool. The life of pool liner products is typically up to 10 years and they should be installed over pool plaster. If an owner selects a plaster finish there are a variety of products that will work. Polymer-cement products don’t require that the pool be filled with water as soon as the plastering process in complete so they are the most used now. These products are installed directly onto the ICF foam inside the pool and are approximately ½-inch in thickness. Depending on the product used, they are installed in one or two coat applications. BuildCrete makes a plaster that is applied in one coat. Some products require an embedded fiberglass mesh as a part of their system also.

Pool plaster finishes should be installed to be very smooth and 100 percent waterproof.

Why is this construction technique worth considering? It can reduce the number of trades and materials needed, money is saved on energy to heat pools, construction is simpler than other methods, concrete is protected from the elements, refinishing when required is less expensive than other systems, and the cost of construction is often less than other competitive systems.

This article was originally published in November 2017.