Better defining how buildings should perform. 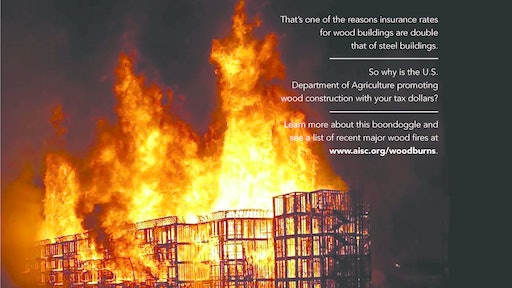 In the old children’s fable about the three little pigs, one built a house out of straw, one out of wood, and one built a brick house. The big bad wolf huffed and puffed and blew down the straw house, and the wood one too. Both the pigs ran to the brick house and were safe because the wolf couldn’t blow it down. In a nut-shell that is what resilience is all about—making safe structures for people that remain intact when disaster strikes.

This fable has been around since the early 1800s and perhaps earlier. We all learned the lesson at a young age, or did we? Today, when disaster strikes we tend to rebuild with the same material that caused the previous collapse. As a population, we don’t know much about structural material so we tend to go with tradition and the materials contractors and subcontractors in the area are experienced with using. If the structure of a home is built with wood and it burns down in a fire, it is rebuilt with the same combustible material.

These are not good times to be relying on tradition; the forces of nature increasingly put our lives and our structures at greater risk. These forces include hurricanes, tornadoes, straight-line winds, floods, drought and fire. If these events aren’t increasing in frequency every year, they are increasing in magnitude, causing greater damage.

The National Oceanographic and Atmospheric Administration (NOAA) says 2017 was the costliest year to date in the U.S. for natural disasters, totaling over $300 billion dollars (the previous record being $100 billion).

Levels of atmospheric carbon dioxide are going up and so is global warming, meaning there is more energy available in the atmosphere to be released in weather events. In the past year, the United States sustained major hurricane damage with flooding in Texas, Florida and Puerto Rico. Fires burnt significant land areas in the west as the result of drought and high winds. Much of the damage to property resulted from using building materials that couldn’t resist the forces of wind, water, and fire. But the granting of building permits for construction in hazardous areas shares responsibility too.

Perhaps worst of all, reconstruction usually involves using the same structural materials that failed in the disaster. For example, in the west when housing developments are destroyed by fire, homes are reconstructed with wood as the primary building material, perhaps with the assumption that lightening doesn’t strike in the same place twice.

The sustainability movement became an outgrowth of the “green” movement and the LEED program where the amount of energy required to create a material and the renewability of material were seen to be critically important. For example, straw is produced every year as a by-product of grain, so it is viewed as a sustainable-green material good for building a straw-bale house.

The amount of energy required to mine, harvest, transport, manufacturer and deliver material to a jobsite also becomes part of the equation. In the case of concrete, the mining of limestone and kilning it at temperatures as high as 2800ºF to make portland cement means it requires more energy than any other structural building material. Also, it’s often said that making a ton of portland cement also creates a ton of carbon dioxide, a major greenhouse gas. Therefore, if you are a proponent of wood construction you argue that concrete is an unsustainable material, one that causes global warming.

A major problem with the concept of sustainability is that it doesn’t account for the amount of energy required to rebuild a structure after a catastrophic event. Reis says that New York State had more sustainable LEED certified buildings than any other state at the time of Hurricane Sandy. But the storm damaged over 300,000 buildings and generated more than 10 million tons of debris that was deposited in landfills. The huge loss of structures required energy to create the original materials, energy to remove and haul debris to a dump site (increasing danger to the environment posed by landfills), and the energy and raw materials to rebuild the structures. The concept of sustainability considers the first construction and not reconstruction when materials can’t stand up to environmental forces.

Sustainability doesn’t consider the energy efficiency of a building over time either. Every building material transfers energy (heat) at different rates, as do building envelopes. For example, concrete transfers heat very slowly and is therefore more thermally efficient than wood.

Reis says the USRC was formed because a group of engineers wanted to learn more about building performance over time. In California they came up with a rating system for buildings exposed to earthquakes.

“We conducted a workshop for architects, engineers, builders, bankers and insurance providers to show them a rating system and they gave us a lot of feedback,” he says. “After that we were approached to start an association to promote resilience and develop a rating service. We did that by focusing on the engineering side of issues.”

Today the council provides information about the use of all building materials and has financial supporters that represent a number of industries. They believe that with thoughtful engineering design the resiliency of almost any material can be improved

Resiliency as defined by the USRC focuses on the following concerns for buildings and structures:

Resistance to weather. Structures must be able to resist increasing forces from natural events such as hurricanes, tornadoes, straight-line winds, floods, fires, and earthquakes.

Saving lives and saving structures. Most building codes are concerned about saving lives in the event of a disaster but they don’t reflect concern about saving the structure. We see this everywhere in our daily lives—the automobile industry engineers cars so that we can walk away from them after an accident even though the car becomes a total loss. We feel the same way about buildings too. Codes might require sprinkling systems for instance, so that people will have enough time to get out in case of fire but without much concern about saving the structure, which is often demolished afterwards.

Protection after an event. After a destructive event the goal for people and businesses is to move as quickly as possible back into their buildings and resume normal life. When buildings are built with non-resilient materials or are engineered poorly, life for its owners can be very stressful for a long time.

Building permits. Permits to build are usually controlled locally so there is wide variability between one location and another. If a local community grants a permit to build in a flood zone it doesn’t matter how resilient the structure is, it will sustain flood damage and occupants potentially lose everything. People like to live along a coastline but oceans are constantly on the rise and building permits must take that into account. Some communities in seismic areas grant permits for buildings to be constructed close to fault lines—hard to think about resilience in a location like that.

The Case for Concrete

Concrete is a resilient material, it can perform well under the most stressful conditions. In most countries, homes are built from cementitious materials and they perform well but. this isn’t the case in the U.S. where lumber is abundant. Most people are raised in structural wood dwellings and it becomes their tradition. They don’t consider the engineered capacity of their home or any of the resiliency issues listed above. They have a positive attitude for wood structures because they were brought up in them, and even when their homes are completely destroyed by forest fires, they rebuild with wood, setting the scene for a future tragedy.

To advertise concrete building construction, the industry must consider marketing attitude change. Owners must begin to wonder about the structure of their homes (not just its design and amenities) and how they would perform in an extreme event—events that are becoming the norm rather than the exception.

Concrete is the most resilient structural material available and it can even stand up to tornadoes, the highest wind-speeds of all. They perform well, are energy efficiency in terms of heating and cooling, they have long life cycles, and can be recycled when their useful life is over.

MAX TwinTier rebar tying tools have a patented technology that dispenses the precise amount of wire needed to tie a rebar cross section. There is no wire wasted, which leads to lowered production cost.
July 1, 2021
Latest
Project Management