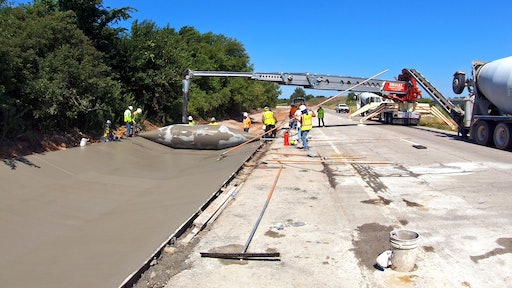 Realm Construction used the 24-ft.-wide custom Curb Roller drum to pour 400 to 450 linear feet of concrete a day and finished the project more than one week ahead of schedule.

Near the Kansas City International Airport lies a well-traveled stretch of road that connects NE Cookingham Drive to I-435. A 20-mile jaunt separates the airport from downtown Kansas City, and while some drivers might make their way via the direct I-29 route, others choose the I-435 route that might take a little longer but sees less traffic.

The on-ramp that connects Cookingham Drive to I-435 appears to be a standard ramp, but the positioning of the on-ramp and the surrounding area were causing headaches for the Missouri Department of Transportation (MoDOT). A field that runs parallel to the ramp often produces significant rainwater runoff that makes its way onto the on-ramp. Sedimentary dirt and debris would fill the south side of the ditch and the on-ramp. As the ditch filled up, the material would spill over onto the south lane of the on-ramp, presenting slippery, dangerous situations for drivers.

To combat the issue, MoDOT maintenance crews closed the on-ramp every few years to clear the ditch and roadway with skid steers, excavators and several haul trucks. Last time they cleaned it, they shut down the on-ramp for two days to complete the cleaning.

MoDOT was searching for a viable solution to address the maintenance problem and finally found a permanent answer as part of a large concrete patching job on the roadway.

In the early summer of 2019, Realm Construction was subcontracted to patch the concrete on Cookingham Drive and the on-ramp to I-435. Russ Stark, manager of field operations, and his team specialize in concrete patchwork. They completed that portion of the job and then sat down to find a way to tackle the ditch liner.

Stark, who has worked for Realm for more than 11 years, needed to find a solution that would stay within the budget and the assigned timeframe. The mission was to essentially to line the ditch with concrete, and Stark initially knew of only one conventional method to accomplish it — form the ditch in a sectional approach (bays) either by pouring the bottom concrete and pulling a tube or screed up by hand or pouring it transversely by coming down the slope to the bottom and then back up. 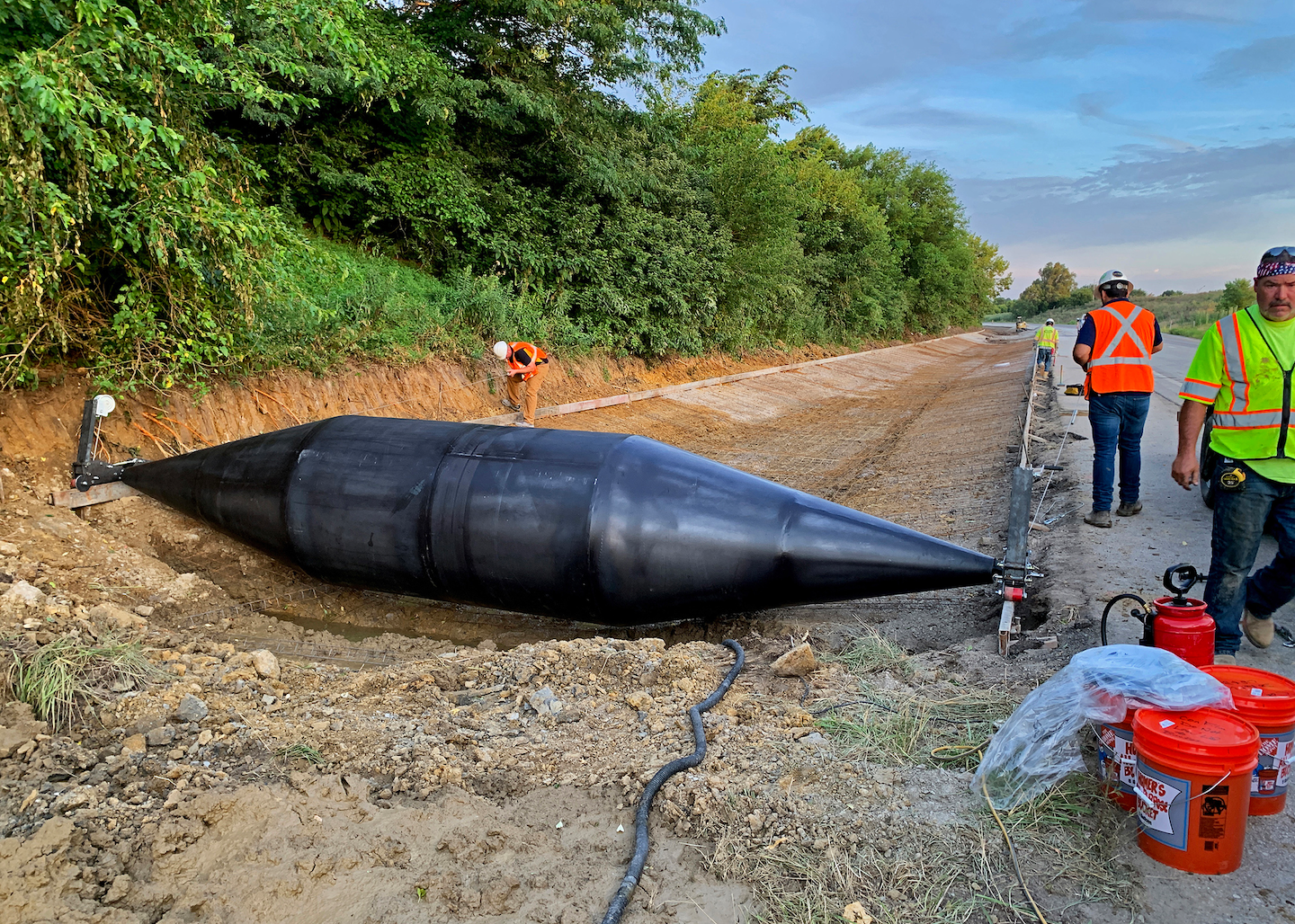 For the ditch liner project, Curb Roller Manufacturing created a custom flume drum measuring 24 ft. wide, 1,000 lbs. and 52 in. in diameter. Each wing section of the drum was 8 ft. wide, with an 8-ft. flat pan section in the middle.“If we approached this project the conventional way, we’d only be able to pour about four bays a day, which is 80 ft. of ditch liner a day,” Stark said. “At that rate, the project would have taken us 15 to 20 days. I knew we could do it quicker than that.”

Stark instead proposed commissioning a large metal flume drum from Curb Roller Manufacturing. The company is known for their hydraulic- and battery-powered concrete roller screeds, but also manufactures custom-sized rolling drums. The drums are commonly used for pouring streets, medians, v-gutters or flumes.

“I had seen a ditch liner drum on a different project a year prior and asked the contractor, Clarkson Construction, who made it,” Stark said. “It was only about 14 ft. wide and I knew we’d need something nearly double that size. But I thought it could work.”

But using the oversized custom drum on the project had its obstacles. First, Stark had to get approval from MoDOT. He presented his case, highlighting the potential for a better finished product and a significantly improved timeline. Matt Daulton, MoDOT resident engineer for the project, reviewed Stark’s proposal and approved with one stipulation — using the Curb Roller couldn’t increase the overall cost of the project.

“We try to encourage innovation on every project,” Daulton said. “I had never seen something like this, but our contractors and manufacturers in the industry often have new ideas and the best answers. So, we were open to it.”

“I knew that this would create a more uniform product, which would be easier for MoDOT maintenance to clean out,” Stark said. “The original cross section of the ditch had varying slope widths and lengths through the entire 1,600-ft.-long ditch liner. So, we had to get the grading team to adjust and create a consistent canvas for the concrete.”

The custom Curb Roller consisted of a 24-ft.-wide, 1,000-lb. hollow rolling flume drum. Each wing section of the drum was 8 ft. wide, with an 8-ft. flat pan section in the middle. The drum was 52 in. in diameter with 4:1 backslopes. Since the ditch liner itself is 2 ft. deep, a 25-degree rise was achieved by implementing a 1-ft. drop for every 4-ft. run.

By the time the drum arrived on the jobsite, the Realm Construction team had prepared the first section of the pour with forms, fabric and reinforcement. Not knowing exactly how quickly the pours would go or how much progress they would make, the team prepared 500 ft. of forms. 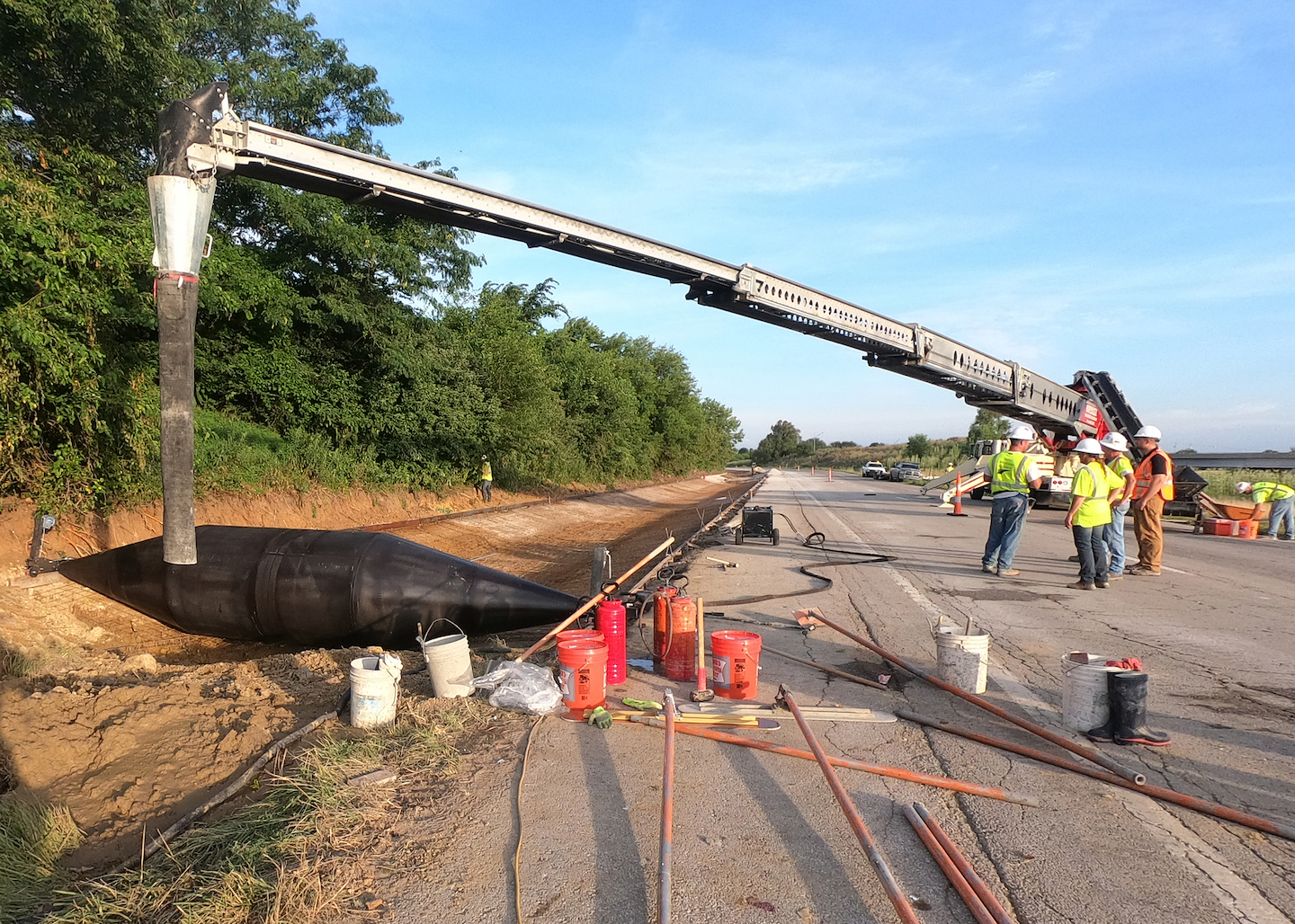 “We were allowed to go to 5-in. slump, but we aimed for a 3.5-in. slump because of the slope,” Stark said. “We had more of a problem getting it too wet, which is okay because we just let it dry out.”

Stark and his team also had to configure the dispersing of the material. “We tried placing the Telebelt chute right in front of the tube to move the material forward,” Stark said. “When it was right up against the tube like that, it ended up spraying the guys like crazy. We moved it ahead and found that the ideal spacing was about 6 ft. ahead of the drum. This allowed the majority to be placed onto the bottom and the excess fed up onto the sides. Not only did this work better, but our guys were a lot happier because they didn’t go home looking like a sidewalk.”

Once everything was dialed in and set to the perfect speed, distance and power, the Realm Construction team was on a roll. They poured 400 to 450 linear feet of concrete a day for the next three days, with virtually no roadblocks or issues. They completed the project more than a week ahead of schedule.

By completing the project in essentially three pours, the team was not only able to save time and physical labor, they also created a higher-quality, more uniform product. 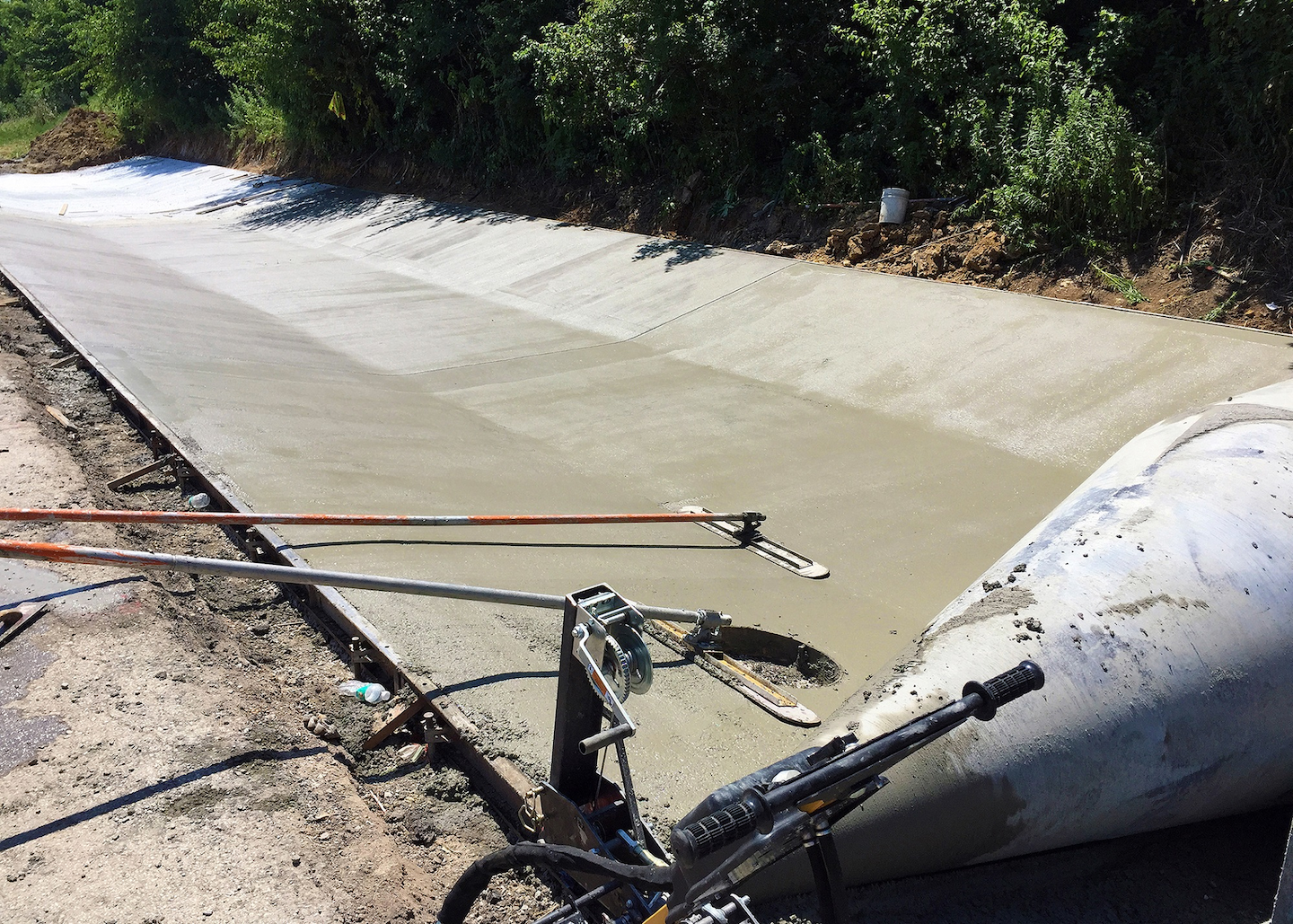 By completing the project in essentially three pours, Realm Construction was not only able to save time and physical labor, they also created a higher-quality, more uniform product.“If they’d done this by hand, the quality and consistency goes way down,” Daulton said. “Since they did it in three large pours, it created a monolithic, uniform product.”

The cost in labor alone was also significantly less. On a 15-day project with a 10-person crew costing roughly $400/day per worker, the process could have cost roughly $60,000 in labor. With the same calculations on the Curb Roller six-day custom drum method, the labor cost equates to roughly $24,000 — a 40% savings in cost and more than 720 hours of saved manpower.

While there were additional costs throughout the project — purchasing the custom drum, renting the Telebelt, etc. — Stark says Realm Construction still ended up under budget on the project.

“Everyone involved came out on top,” Stark said. “MoDOT got a higher-quality product in less time and with less traffic disruption. We saved time and money on the overall project, making it a more profitable venture.”