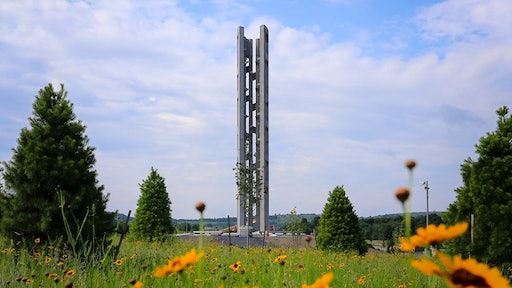 The Tower of Voices – Flight 93 Memorial is a tribute to the 40 passengers and crew who died when their plane crashed in Pennsylvania on Sept. 11, 2001.
PCI

The Tower of Voices – Flight 93 Memorial, a tribute to those who died when the plane crashed during the Sept. 11 terrorist attacks, received the 2020 Precast/Prestressed Concrete Institute's (PCI) Building Information Modeling (BIM) Design Award.

The memorial is in Stonycreek Township, Penn., where the United Airlines Flight 93 crashed in 2001. There were 44 people on the flight; two pilots, five flight attendants, 33 passengers and four hijackers. The 40 passengers and crew who died in the crash are remembered as heroes, as they worked together to stop the terrorists from reaching their intended target.

The 93-foot-tall tower will house 40 custom-made aluminum wind chimes, one for each of the passengers and crew who died that day. Each chime is cast to produce a distinct musical note, so that together they create a set of 40 “voices." According to the National Park Service (NPS), there are no other chime structures like the Tower of Voices anywhere in the world. The tower features a unique shape and orientation to help facilitate air flow to the wind chimes, made of polished aluminum tubes, ranging 8 to 16 in. in diameter and about 5 to 10 feet in length. The size of each chime is dependent on the musical note and associated frequency that it is intended to produce.

The memorial has been under construction since soon after the terrorist attacks, when a temporary memorial was opened. The first phase of the memorial opened in 2015, which included a visitor center and a Wall of Names. Construction on phase two, which includes the Tower of Voices, began in 2017. The tower was completed in 2018 and the wind chimes are being installed in the fall of 2020.

Due to the complexity of the project, designers used BIM and precast concrete to allow for a high degree of accuracy. The memorial consists of many unusual curves and widths within a slender frame. The tower consists of faceted columns and diagonal, curved beams, which made the use of BIM and precast concrete critical to the design, says Paul Murdoch of Murdoch Associates.

“The use of Building Information Modeling (BIM) software was imperative to ensuring that the detailed geometry of the pieces was exact, and that no interferences for the reinforcing steel, splice sleeves, lifters, electrical conduit, or various other internal components could occur,” Gorman says.

According to PCI's project profile, Gorman's team used 3D printing to create prototypes to better understand the structural relationships between the tower columns and beams.

“The pieces were designed in a circular and skewed layout, adding complexity that required a BIM program to ensure accuracy,” Gorman says.

The design required slender columns, so much so that the precast concrete producer determined the columns would be too fragile to transport and erect. BIM was used to design diagonal splices to support the thin columns. And because they were precast, they could be built indoors during winter months.

The chimes are still being designed, built and installed, according to Wikipedia. As of August 2020, eight of the 40 chimes have been installed.

The Tower of Voices Memorial is once again an active construction site, as the remainder of the chimes are installed. The annual Sept. 11 observance will be held privately in 2020. Park grounds will remain closed until the end of the event, which will be live streamed. Check out the Tower of Voices webcam.

The visitor center is open daily from 9 a.m. to 5 p.m. To facilitate social distancing, the public may move one way through the building and some interactive features will be closed. 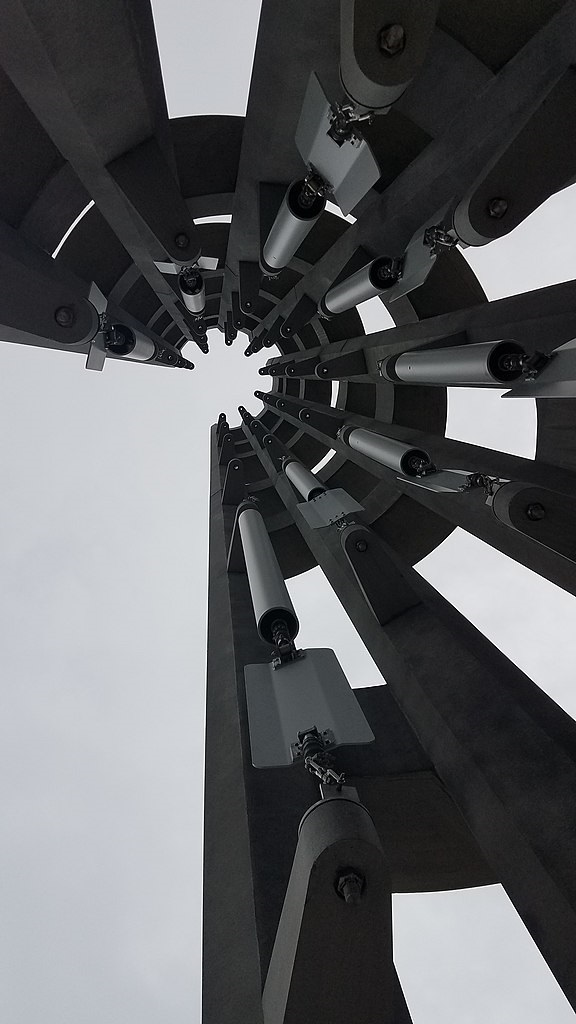 The last of the chimes are being installed in the Tower of Voices, which recently was awarded for its BIM design.Rick h87 / Wikimedia Commons