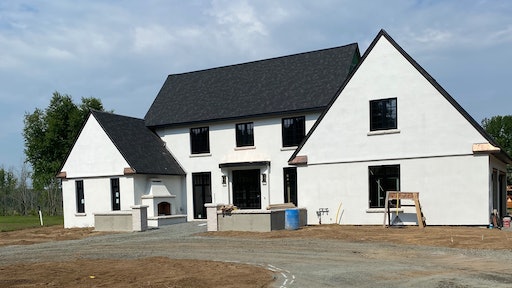 This concrete home in Connecticut was awarded the CFA 2020 Best Projects of the Year in the Above-Grade Concrete Home category.
Concrete Foundations Association

Click the above image or any below to open a gallery with additional photos of the construction.

With its long history of concrete experience, Purinton Builders of Connecticut is not one to shy away from new challenges. Started in 1984, general contractors Dennis Purinton and his son, Michael Purinton, have made a name for themselves through the success of their cast-in-place concrete projects. The company has continually pursued the latest technology in the field, with a desire to create high-quality walls and foundations, as well as environmentally friendly mix designs.

Actively involved in the industry, Dennis Purinton has kept his pulse on the latest concrete innovations throughout the years. He’s served as president of the Concrete Foundations Association (CFA) from 2016-2018. He was named Contractor of the Year in 2007 by the National Concrete Foundation Association and was a voting member on American Concrete Institutes’ committees for cold weather concreting and residential concrete.

Now he’s got another accolade on his belt. One of Purinton’s recent jobs, a single-family custom home with removable concrete forms, was awarded the CFA 2020 Best Projects of the Year in the Above-Grade Concrete Home category. The project client had asked for an energy-efficient home, and Purinton convinced the builder and architect to take a chance and construct the 2,900-sq.-ft. structure with concrete, relying on concrete’s thermal mass.

“The owner was interested in a high-performance, energy-efficient building shell,” Purinton says. “The option for concrete with a cast-in-place insulation system became appealing.”

Wall thickness: Varied between 8-12 in. 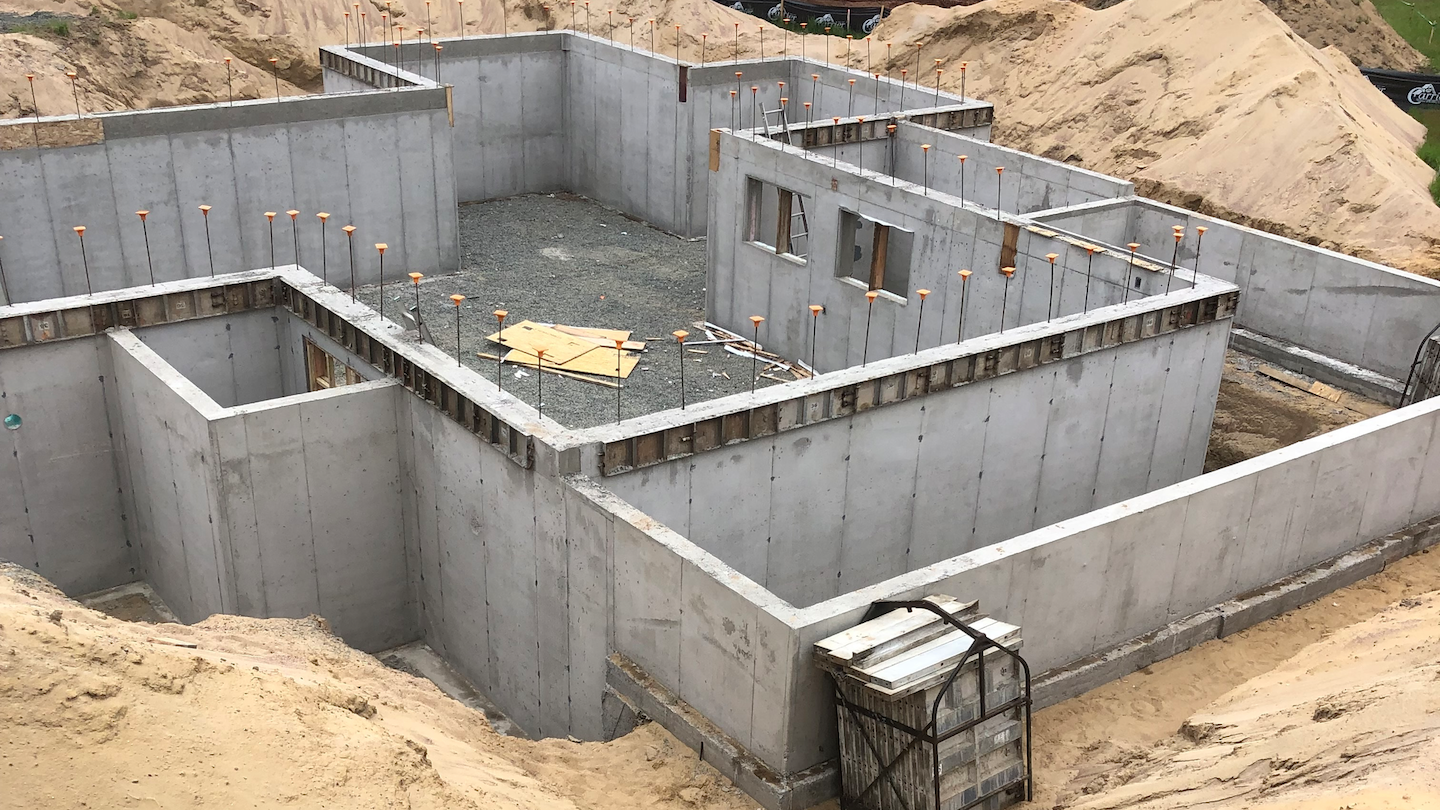 “When you build a concrete house, you have to put a tremendous amount of thought in upfront,” Purinton says. “The builder, the owner, the architect and I sat down with all of these people before one piece of pencil lead hit a paper. One of the things I explained to them is you have to design everything upfront. You have to know where everything goes before we even start. This is not cavity wall construction. This is not building out of toothpicks. There is no cut and hack afterward to make it fit. You really have to get your act together.”

They spent three months designing the project as completely as possible.

“We were getting everything laid out so that we knew where everything was going to go and how we were going to do it,” he says.

“All the house walls above and below grade have the 4-in. Thermomass CIP Insulation system, which is a system of casting in place a layer of insulation within two layers of separated concrete, structurally secured,” he says. “It was important that the concrete was a self-consolidating mix, given the heights of the placements and the tightness of the details for the thinner concrete wall portions.” 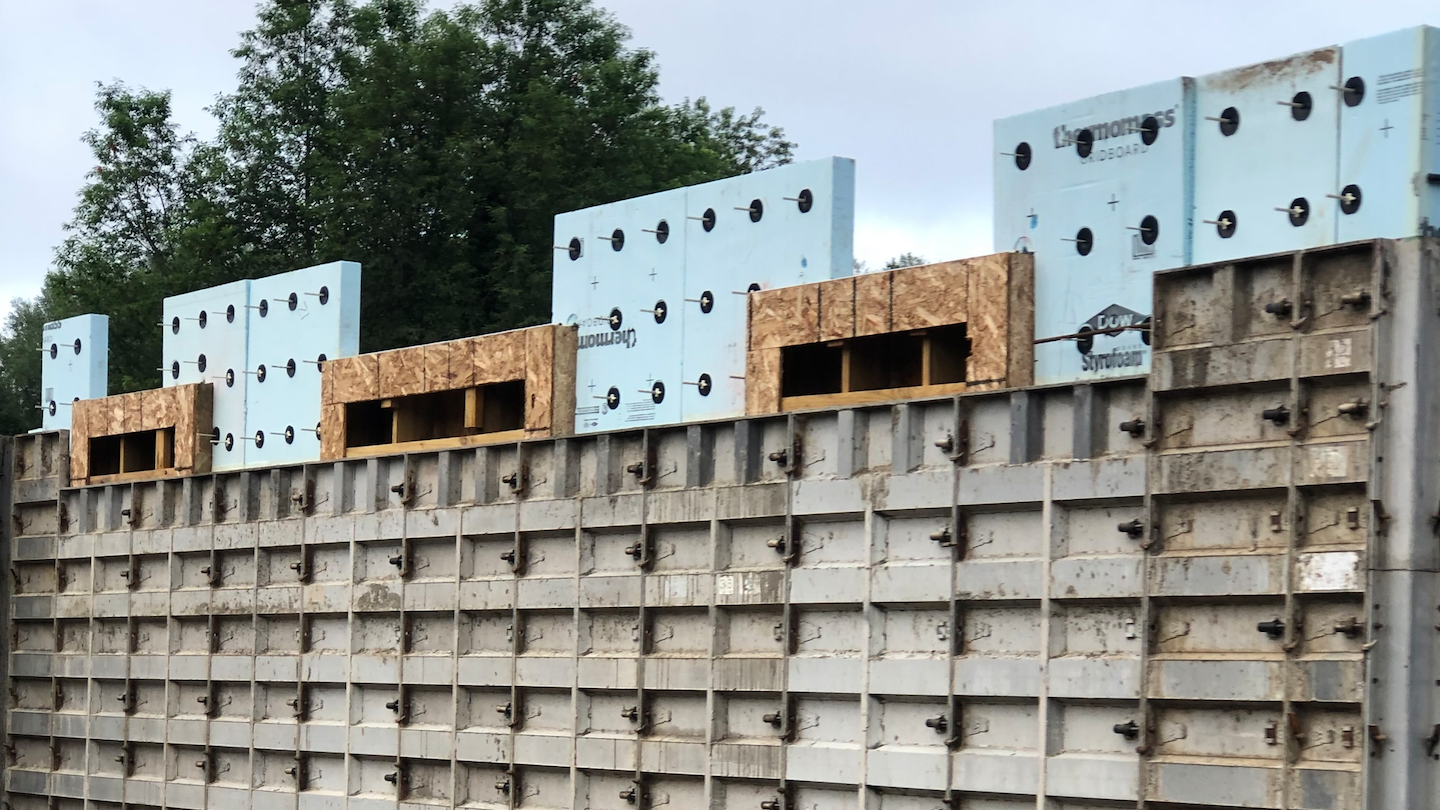 “Basically, what you have is a layer of concrete on the outside, then you have insulation and then have a layer of concrete on the inside,” Purinton says. “In the wintertime, the interior concrete or the interior wythe, stores the heat for a temperature between 60º and 70º F. That's where you're taking the heat of the sun and you're storing it in that concrete until later in the day. When the ambient temperature outside starts to drop, the concrete puts that heat back into the structure.”

The opposite happens during warmer months.

“In the summertime, the exterior wythe of concrete absorbs the heat of the sun, protecting the insulation that protects the interior wythe,” he says. “What it does is it absorbs all that heat all day long and then dumps it at night when the temperature goes down. So, both wythes of concrete act differently depending on the season and what you want it to do. That's why it's important to put insulation in the center of the wall.”

In this system, the electrical wiring in perimeter walls was installed before placing the walls, which constricted normal concrete flow, Purinton says.

“Detailing was an important consideration as all windows and doors were to be attached to the concrete,” he says. “That meant that the openings were critical in both squareness and plumb.” 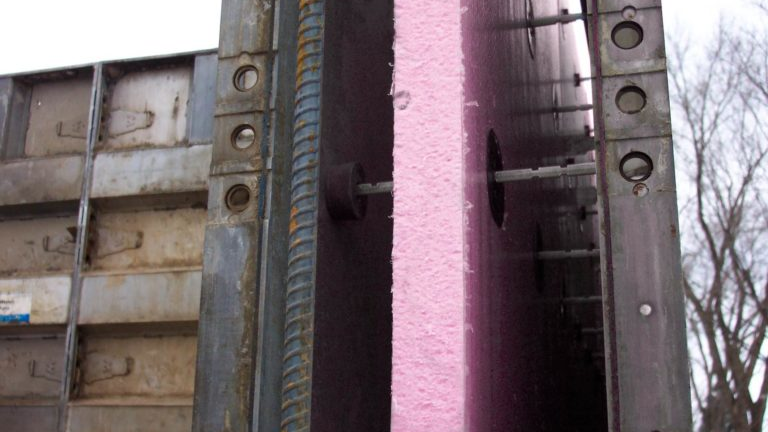 The client chose the Thermomass system over insulated concrete forms (ICFs), so Thermomass System CIP was used in the construction, with the Thermomass rigid insulation in the center of the cast-in-place walls.Thermomass

The house incorporates several energy-efficient technologies, such as solar panels and geothermal energy. Those factors, combined with the use of the concrete thermal mass, made the building project stand out, Purinton says.

“The house is expected to be net-zero in energy consumption,” he says. “The combination of the concrete’s thermal mass, extremely low air inflation (0.05% air changes), and geothermal wells make this home very efficient.”

The structure’s Home Energy Rating System (HERS) Index is negative. Most homes have a HERS Index of 0-150; a higher rating denotes lower energy efficiency. According to the U.S. Department of Energy, a typical resale home scores a 130 on the HERS Index, for example. Purinton notes that the results from the blower door test were "spectacular." Conducted on the house to test the building’s air leakage and energy consumption, they exceeded expectations.

When constructing a house with such a tight design, he suggests that contractors should pay close attention to the HVAC system. “The HVAC person is extremely important in this," he says. Purinton jokes that without a properly designed and installed HVAC system in a concrete house reliant on thermal mass, “if you cook a lobster in July, you’re going to smell it at Christmas.”

In a house as tight as this concrete one, there is a low rate of air changes per hour.

“A normal builder is used to building something that leaks like a sieve and doesn't have to really worry about air quality,” he says. “Air quality in a concrete house is extremely important. And the HVAC contractor needs to understand that the size of the heating and cooling equipment has to be substantially smaller, or it will short cycle and burn itself up. Building a correct concrete house involves a lot more than what a normal builder is used to working with.”

A House for the Jetsons

The most interesting part of the house is its technology, not its concrete walls, Purinton says.

“The house is very unique; it’s past the house of the future,” he says. “When I say past it, I truly mean it. This house is, even though it's very plain looking, I would compare it to something of the Jetsons.”

There are no light switches, for example. The lights are controlled by sensors.

“When you enter a room, a sensor knows that you entered the room,” he says. “It knows the time of day. It senses the amount of natural light that's available.”

The technology learns the residents’ habits and adjusts accordingly.

“If you get up in the middle of the night, before your feet hit the floor, it senses that you have moved,” Purinton says. “It turns on the appropriate number of lights to the correct hue so that you don't wake up your spouse, but yet you don't trip over the dog on your way to the bathroom. The technology in this house is just mind boggling and it’s the house of the future because of the thermal mass, low air infiltration, and geothermal wells make this home extremely efficient.”

The key to the project’s success, Purinton says, was finding the right builder; someone willing to take a chance on the technology.

“The interesting part is, is I get a lot of interest in concrete homes,” he says. “The biggest thing that you have to overcome is finding a builder who is interested in doing something different. Most builders are carpenters by trade. That's what they know how to do. To build out of concrete is totally new to them and they're afraid of it. They don't understand it.”

The builder on this project is someone Purinton had worked with several times over the years.

“I worked with the general contractor for four or five years previously to doing this project,” he says. “He's a very innovative guy. He's done many very energy-efficient houses and he's won some awards in energy efficiency. And he said, ‘I really believed everything you told me over the last few years, but there's always that little bit of doubt in my mind that what you were saying was 100% true.’ Now that he's built it and he’s actually been in the house, he absolutely understands what I was saying to him all along. He says, ‘I believed you, but I didn't.’”