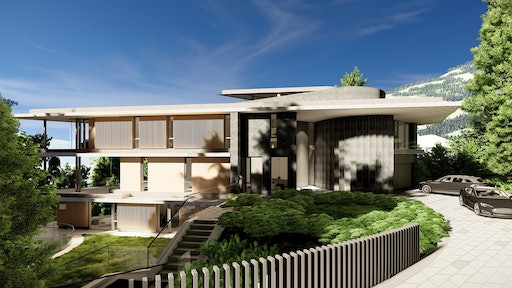 A rendering of the Kadenwood Residence in Whistler, British Columbia, Canada, shows an array of cantilevered elements in both concrete and steel.
Click on the image above or photos below to open an online photo gallery and view additional images..
Schöck North America

Perched on the hillside of Whistler Mountain—one of North America’s top ski resorts—the 20,000 sq. ft. (1,800 sq. m) Kadenwood residence complies with stringent energy efficiency and seismic requirements. Its footprint is a four-sided polygon with sweeping views of coastal mountains and alpine lakes. The four-story ski-in/ski-out structure features an elevator that transports occupants from the entry-level to the ski slopes 50 ft. (15 m) below. The top three stories have year-round accommodations for the homeowners and separate suites for three other families. 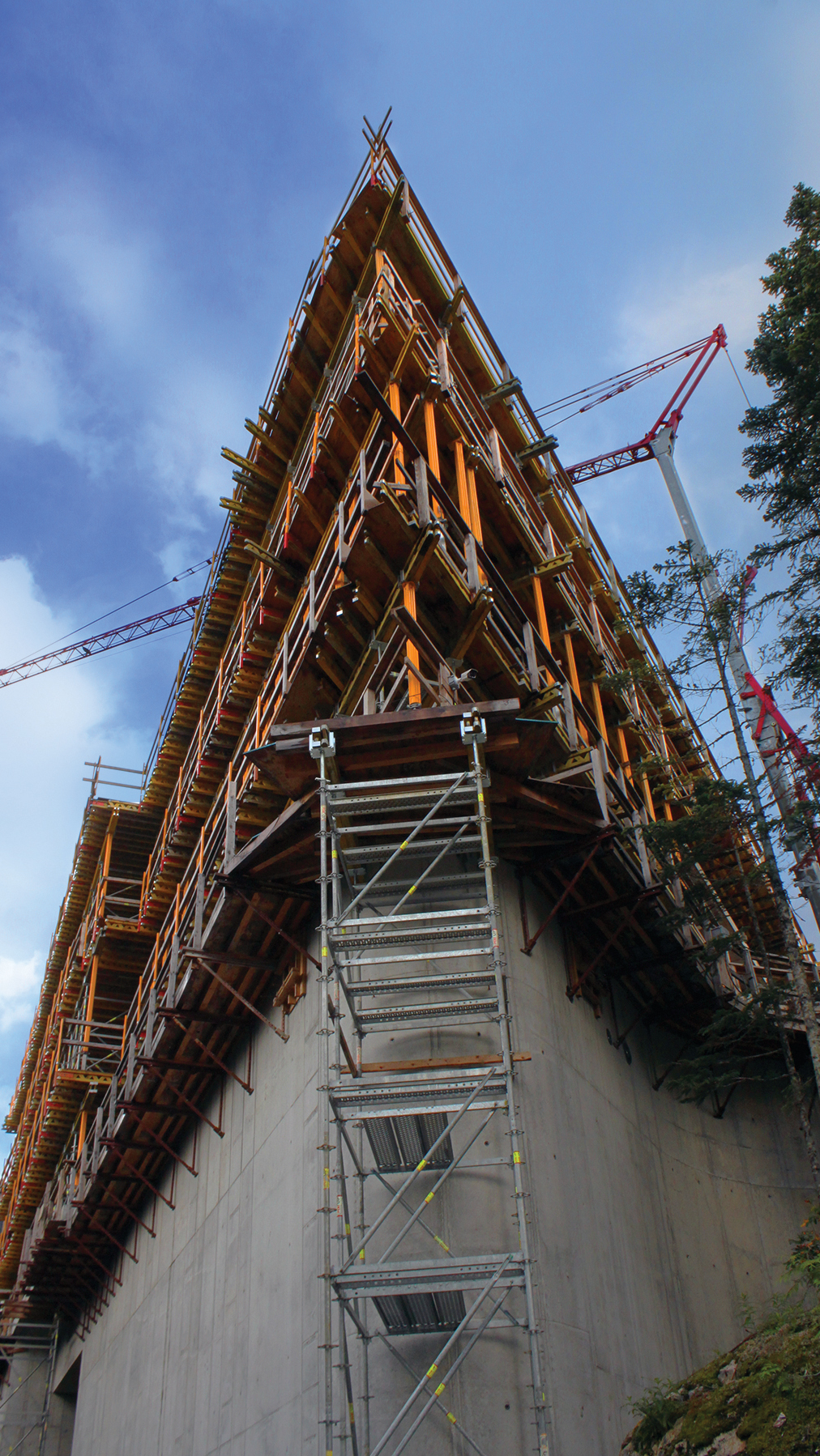 A triangular ship’s bow profile with floor-to-ceiling glazing projects toward the mountains. Concrete-to-concrete structural thermal breaks insulate and support the cantilevered roof and floor plates. Interspersed are thermal break modules for earthquake load transfer.Schöck North AmericaThe building is a study in concrete cantilevers reminiscent of Frank Lloyd Wright’s Falling Water, whose cantilevers appear to float above a waterfall. “We wanted to cantilever the top two floors over the ski slopes and toward the views, so that when in the house you felt you were floating in the clouds,” explains senior technologist Eric Pettit of the Vancouver, B.C. architecture firm Openspace.

When Kadenwood construction began, he says that building codes in Canada encouraged the use of structural thermal breaks to mitigate thermal bridging, and with the current BC Energy Step Code, the building would have to include them to meet the high energy performance target.

Transferring Loads but Not Heat

Cantilevers impart high rotational and shear forces, especially in the mountains of Western Canada due to the district’s snow loads of 8.5 kPa (176 psf), compared to design loads of 1.64 kPa (34.3 psf) in low-lying Vancouver, which is 125 mi (200 km) to the south. The designers needed cantilevered structures that could not only carry those loads but also meet the seismic requirements of the region.

“The whole structure is concrete—from the basement to the roof,” says concrete contractor Graham Roberge of Alpen Construction, a subcontractor of Bradner Homes Ltd. “We used about 2,616 cubic yards (2,000 cubic meters) of concrete and a million pounds of (reinforcing) steel on the project.”

Given the high thermal conductivity of concrete and steel and its high surface area exposed to Whistler’s frigid winter temperatures, the design team needed to mitigate thermal bridging and its unwanted effects. 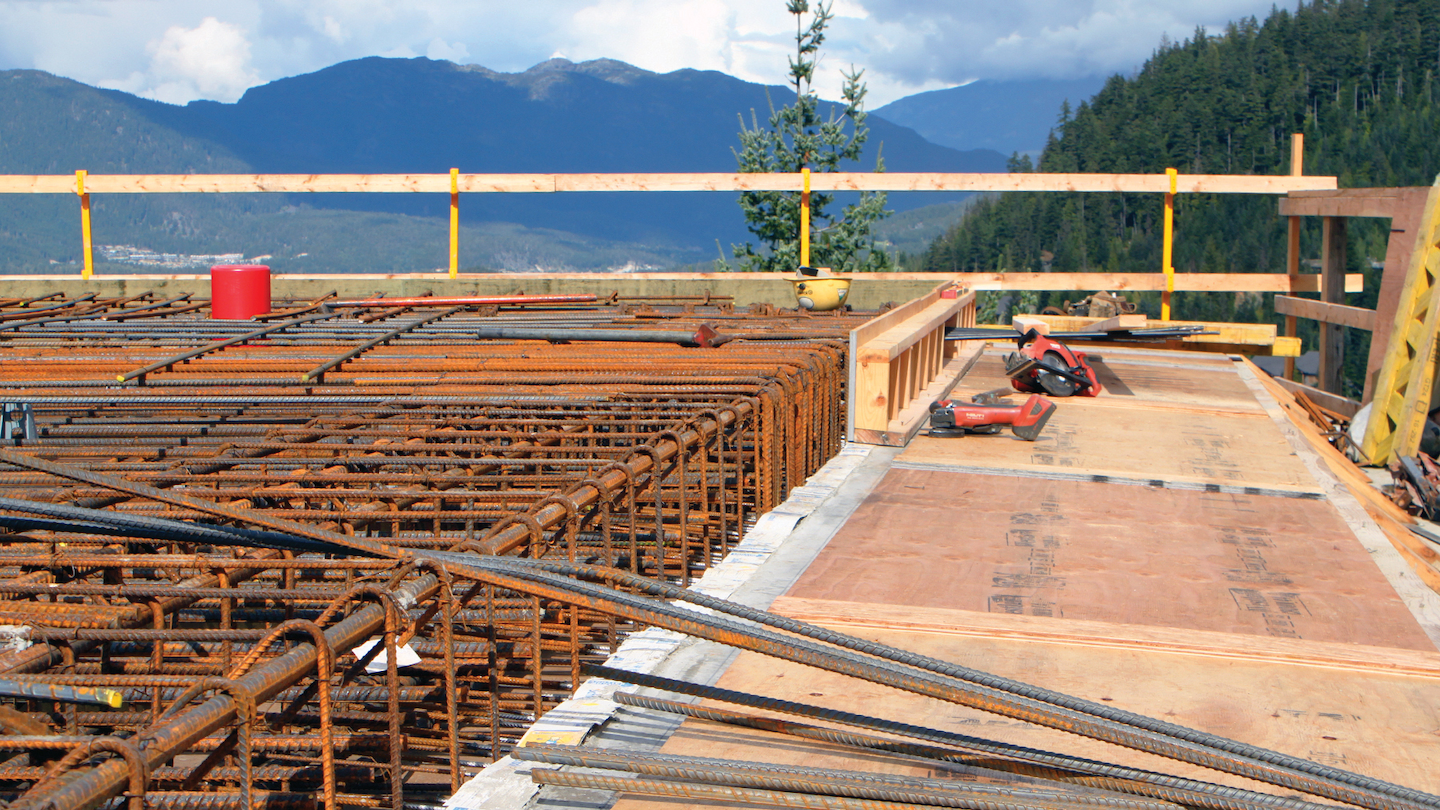 The wide roof overhang on the right is cantilevered while maintaining thermal and structural integrity using Isokorb® concrete-to-concrete structural thermal breaks. The concrete for the balcony is in place while the much thicker interior slab is being formed up.Schöck North America 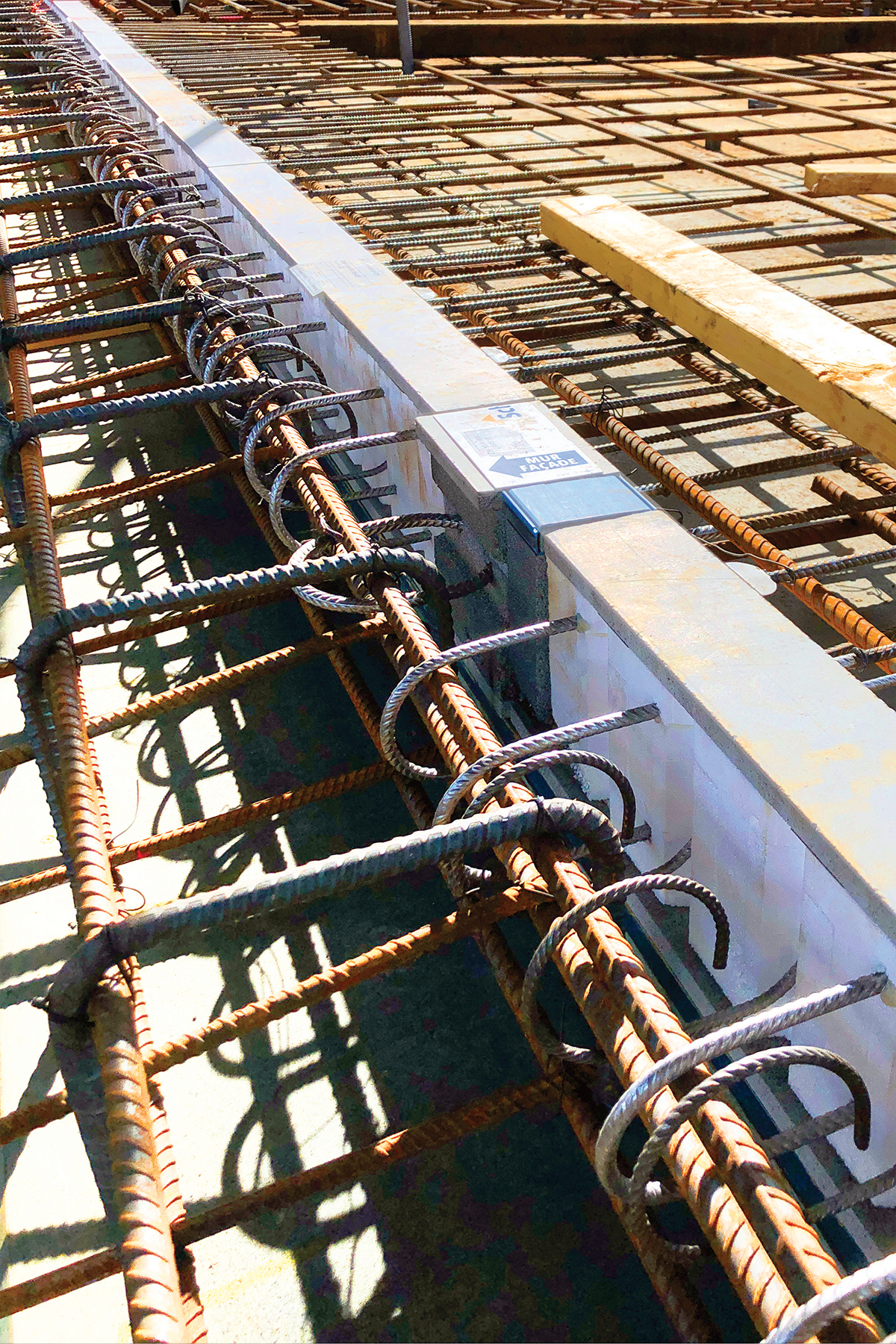 Structural thermal breaks for slab edges insulate and support shorter cantilevers such as “eyebrows” over windows.Schöck North AmericaTo prevent thermal bridging while supporting cantilever loads, the designers specified four types of structural thermal breaks. For the balcony and roof elements, the team specified Schöck Isokorb® concrete-to-concrete modules. Each 3.3-ft. (1.0 m) module consists of a block of rigid insulation penetrated by stainless steel rebar, which ties into the rebar of the interior slab and the cantilevered balcony. The insulation separating the interior and exterior slabs, together with stainless steel rebar that is one-third as conductive as carbon steel rebar, reduces heat loss at the penetration by up to 90% , according to the manufacturer. These modules are interspersed with a different kind of Isokorb® concrete-to-concrete thermal break modules that transfer horizontal earthquake forces as required in the region. 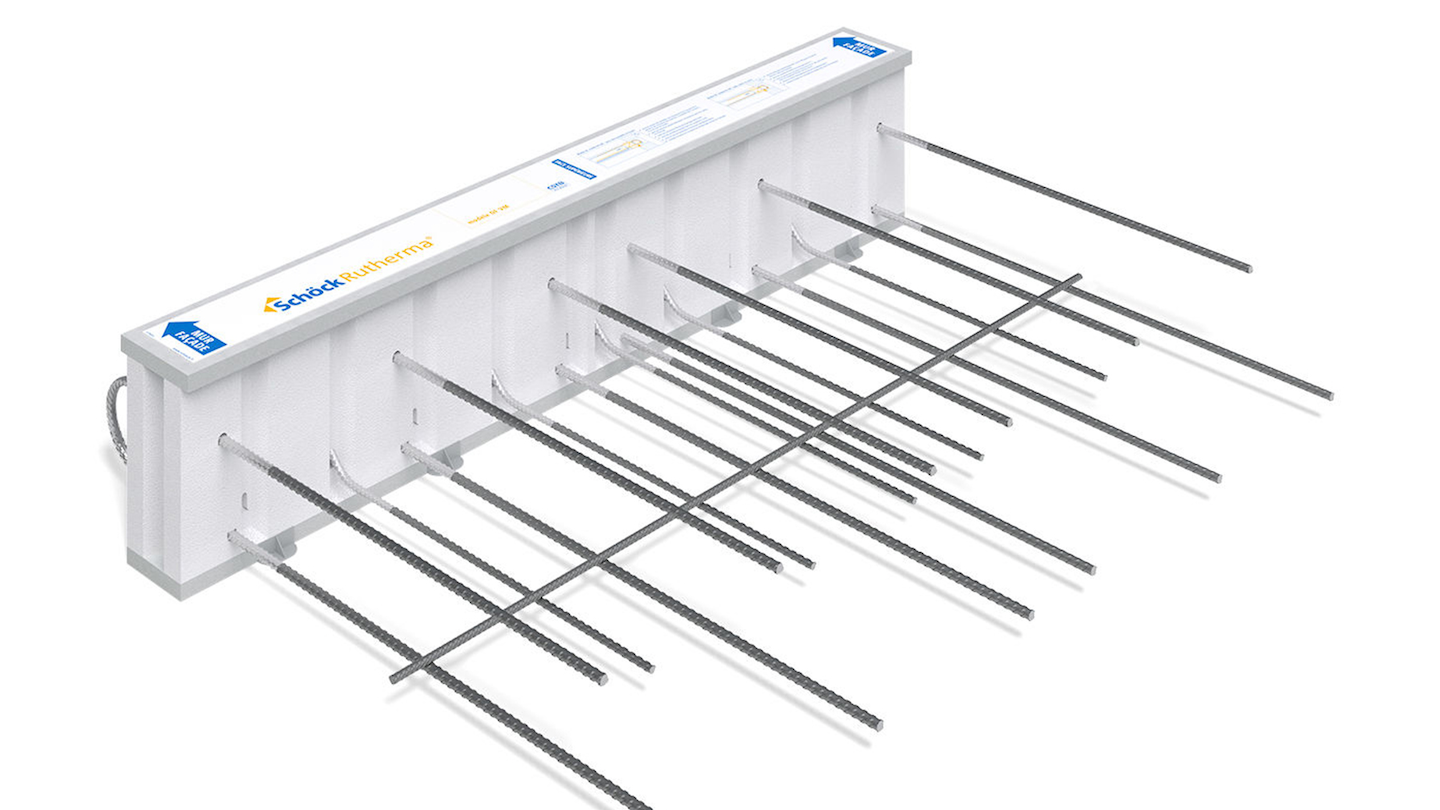 Above several windows, the architects incorporated concrete “brows” that overhang a short distance similar to a sunshade. For these small cantilevers, the design team specified Isokorb® concrete-to-concrete thermal breaks for slab edges. The stainless steel rebar penetrating the insulation block ties into the interior slab rebar. On the exterior side, the rebar forms into a loop to support the small cantilever. 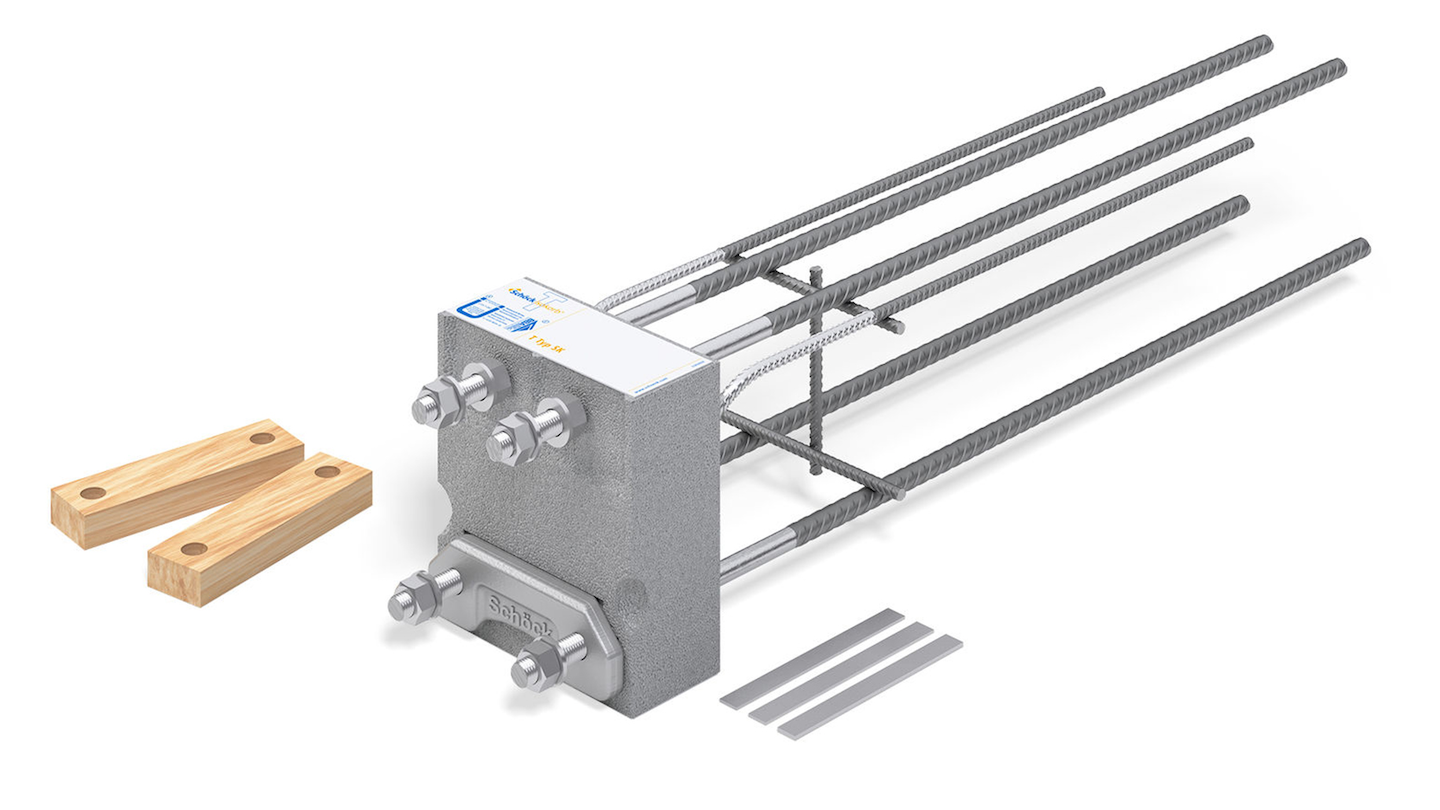 The fourth Isokorb® thermal break used connects concrete to steel at the steel balcony that cantilevers from the concrete structure over the entry area. The stainless steel rebar on the interior side of the module is wired into the floor slab rebar. Once cast in concrete, the exterior threaded side of each rod is bolted to steel balcony beams using backing plates and high-strength stainless steel nuts. 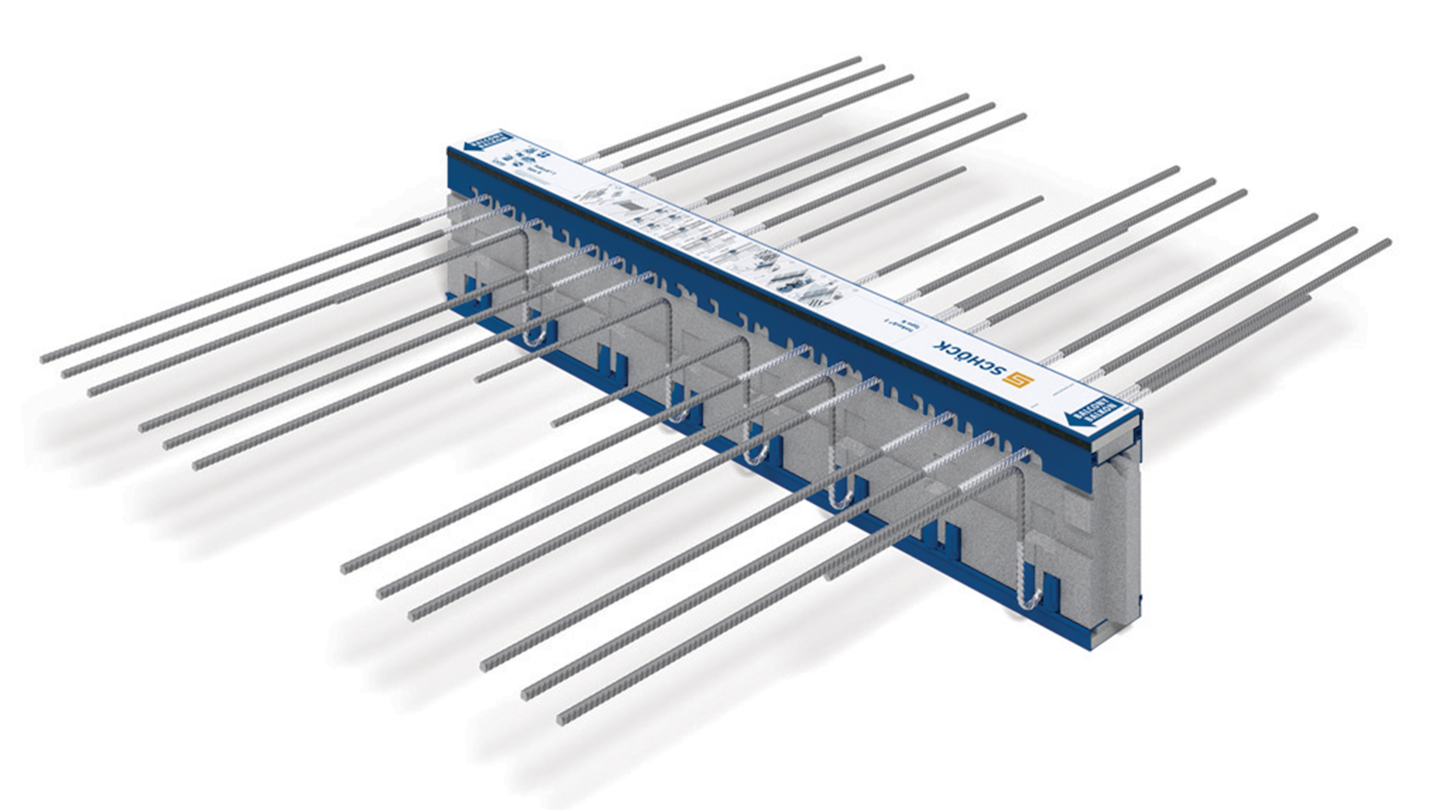 This type of Schöck Isokorb® concrete-to-concrete structural thermal break transfers bending moments and shear forces, while preventing heat energy waste, chilled interior floors, and formation of condensation and mold.Schöck North AmericaIncreasing the temperature of structural penetrations on the interior side of the insulated envelope also prevents condensation and mold growth. Pettit explains: “Because of the thickness of the slab and the sheer volume of cold material connected to warm material, there’s a threat of icing and frosting inside the building. The structural thermal breaks improve envelope performance in those areas.”

While the alpine climate on Whistler Mountain averages a nippy 7-19°F in mid-winter, temperatures also fluctuate dramatically year-round due to the region’s proximity to the temperate coastal region, exacerbating problems of condensation and mold.  “Whistler isn’t like Alberta where everything freezes until spring. There is a constant freeze/thaw cycle,” Pettit says. “Humidity in the house can start to condense on the cold surfaces and cause problems.”

Openspace began specifying structural thermal breaks in 2014 when designing another Whistler Mountain project. “On that building, we were trying to figure out how to hang heavy concrete cantilevers by designing our own bolt-on details. When we happened upon the Isokorb® products, I was excited,” Pettit says. “They were the perfect solution to the problem.”

Tracy Dacko has more than 25 years in building products strategic marketing management. She is the former president of the New Jersey chapter of the Business Marketing Association, served on the Board of Trustees for PeopleCare Center for Human Services, and has authored numerous articles and published works.

Can You Increase Base Strength on a Budget?