The University of Phoenix Stadium chose polished concrete floors to contend with the durability and maintenance demands of a high-traffic area. 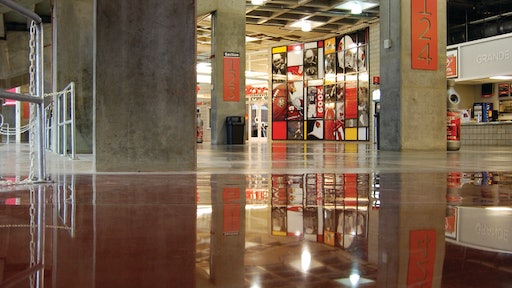 Yezco Concrete Polishing is polishing 120,000 square feet of floors at University of Phoenix Stadium, home of the NFL’s Arizona Cardinals.

The University of Phoenix Stadium, home of the NFL’s Arizona Cardinals, is unique in both the sporting and architectural worlds with its retractable fabric roof and roll out, natural grass field, which when not in use for football or soccer games spends its time 714 feet from its field position outside of the stadium. It opened in 2006, incorporating green building features like an advanced recycling program, use of eco-friendly chemicals, water-saving features and working toward certification as a Leadership in Energy and Environmental Design Operations and Maintenance facility (LEED O&M).

Rob Yezzi, VP at Yezco, says his company polished a test area at the stadium for the management company to abuse and observe. The management company determined polished concrete’s maintenance requirements would fit within the facility’s budget and capabilities, and the floor finish, with proper maintenance, would withstand the foot traffic from hundreds of thousands of visitors each year and the spills common with concession sales. It hired Yezco for the job.

Yezco has been working at the stadium for more than a year and still has more work to do. When all is said and done, Yezco will have completed more than 120,000 square feet of polished concrete work at the stadium in preparation for the 2015 Super Bowl.

Yezco’s crew started the project on the concourse level and progressed to the main entryways, club level and administration areas. Yezzi says the biggest challenge his crew faced was with a concrete finish that was not designed to take a polish; essentially, the slab did not exhibit ideal floor flatness and floor levelness (FF and FL numbers) for polished concrete. That demanded more work from the Yezco crew in the early metal-bond abrasive grinding steps. “We started with aggressive diamond tooling. In some instances we had to stick with a grit and run it a few times – more than your usual once-over pass north, south, east and west,” Yezzi explains.

Yezzi explains the repeat dye applications ensured a precise color match at the end of the project. “In between the steps in the polishing process, the crew is scrubbing the floor which can take up residual color. And through polishing itself you can lose color,” he says. “To avoid the risk of the floor lightening up, we reapply color after the 400 grit step. It’s not a full application, just a light mist to guarantee we get the best color saturation.”

The stadium understands maintenance is the key to keeping polished concrete looking new, and Yezco supports the stadium’s maintenance efforts by assisting them on cleanup of highly acidic spills, like mustard and jalapeno juice from the concession stand. Yezco’s consultative approach to working with the stadium’s management company and facilities crew on maintenance issues contributes to a successful flooring installation and scores another point for polished concrete.

Scope of project: Remove epoxy applications and grind and polish 120,000 square feet of concrete floors at the University of Phoenix Stadium in Glendale, Ariz.

The World at Their Feet