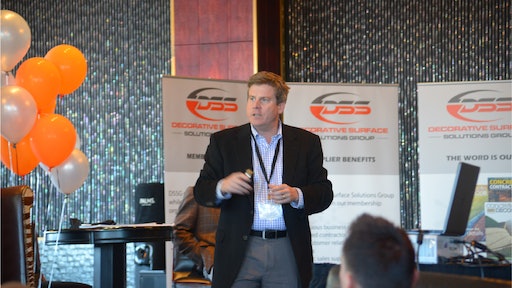 DSSG CEO and President Curt Thompson addresses guests at the company's first annual membership meeting at The Palms Hotel during the World of Concrete trade show.

The Decorative Surface Solutions Group (DSSG) held its first annual membership meeting at The Palms Hotel during the World of Concrete trade show. Over forty executives from member companies attended the event which featured presentations from DSSG leaders and members.

DSSG members are contractors focused on the rapidly expanding architectural concrete market and decorative flooring solutions including polished concrete, concrete topping slabs, terrazzo, epoxies, and other traditional flooring choices. “Our inaugural membership meeting was the real coming out party after we announced the organization at last year’s World of Concrete event,” says DSSG CEO and President Curt Thompson. “Although we have had tremendous success over the last 12 months signing forty companies, we are looking to see that increase significantly this year. Our focus on helping members accelerate their growth and profit in this market is really beginning to resonate with the top-tier companies.”

The focus on building a quality membership with the best-of-the-best won’t be compromised throughout the next growth period. “DSSG members received nine awards from the Decorative Concrete Council this year,” notes Thompson. “We would like to continue that tradition of excellence and see it grow in the future.”

"Trademark Concrete Systems was thrilled to take home three top awards from the Decorative Concrete Council ceremony in Las Vegas,” adds Lance Boyer CEO at Trademark Concrete Systems, Inc. “We received two first place awards for our work at Kaiser Panorama City and Tarbut V'Torah School in Irvine, and a second place award for our work at a Los Angeles private residential estate project. We were proud to see several other DSSG members were also winners."

“We thoroughly enjoyed the DSSG inaugural membership meeting,” says Alan Young, General Manager at Business Flooring Specialist. “From the very beginning our membership has proved beneficial, and it was great to be able to put faces to names of our fellow members and preferred suppliers. Additionally, we were excited to see how many respected, prospective members took part in the event. The selective process in which DSSG forms partnerships will truly benefit its’ members and our industry as a whole.”

I wasn't all work though as DSSG launched their member and supplier reception. It was a party to remember with a capacity crowd in attendance all evening at the private affair hosted at the Kingpin Suite named for the two bowling alleys.

“As a supplier, the inaugural DSSG event at the Palms was a huge success,” says Jason Simpson of ProCrete Resources, Inc. “The DSSG event was a fun and effective way for me, as a supplier, to meet the DSSG membership. I had many great conversations with decorative concrete contractors of the highest caliber and established some new business opportunities which I look forward to capitalizing on in the near future. Procrete Resources is a committed DSSG supplier and will be for the foreseeable future.”

"Having joined the DSSG in 2015 as a vendor of choice, we enjoyed the networking opportunity for our Solomon employees to meet with some of the best-in-class decorative concrete contractors,” adds John Anderson of Solomon Colors. “The Kingpin suite offered a great relaxed atmosphere to engage in conversations or fun around the bowling lane or watching the magician."

In addition to peer-to-peer networking opportunities, DSSG also offers education, marketing and back -office support programs for members as well as discounts on thousands of products offered by their preferred suppliers.

If you would like more information about the Decorative Surface Solutions Group, please contact Curt Thompson at (925)964-6377 or email him at ct@dssgteam.com.