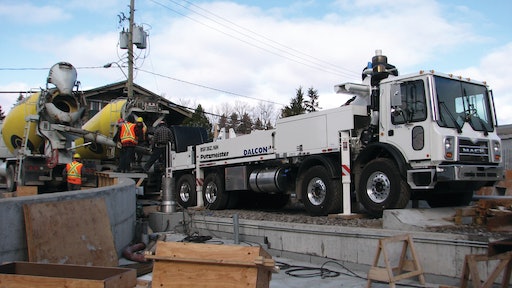 When its expansion is complete, Complexe Jules-Dallaire, owned by Cominar Real Estate Investment Trust and located in Quebec City, Canada, will be one of the tallest buildings in the city. To help Phase Two of the project reach its full height under challenging conditions, the construction team employed a Putzmeister detach truck-mounted concrete boom pump and other equipment, marking the first time a concrete pump and placing boom was used on a high-rise building in Quebec City.

Phase One of Complexe Jules-Dallaire, which was completed in 2010, included the construction of two towers joined by a central section. One tower was built up to 17 floors, the maximum height allowed by the city of Quebec at that time, while the second tower had not yet been started. The scope of the $80 million Phase Two of the project, which began in September 2011, consists of adding the second tower to the structure, which when completed will reach 29 floors.

Frédéric Gauthier, engineer and project manager with the project's general contractor, Dalcon Inc., enlisted the expertise of the local Putzmeister distributor, Pumpaction Inc., and its sales representative, Keith Armishaw, to help him choose the proper equipment needed to deliver the more than 19,600 cubic yards (14,985m3) of concrete required to reach the maximum height of 361 feet (110 meters) for this project, which is scheduled for completion in late 2013.

Providing enough pressure to place concrete at a height of 361 feet can be a challenge if the proper equipment is not used. To help overcome that challenge, the construction team chose to use a 38Z-Meter truck-mounted concrete boom pump. It is equipped with the optional Series II detachable boom and SBU conversion kit, as well as a high-pressure hopper and outlet to handle the higher pressure.

"We chose these options for this particular project because the calculated pressure required by the end of the job would be greater than the standard 1233 psi (85 Bar) pressure of the Putzmeister 16 cell pump system," says Armishaw. "The SBU conversion was used to quickly convert the pump from rod side to piston side oil supply."

In addition to pressure at that height being a challenge, managing the pouring schedule on a high-rise project can also be difficult. For this job, each elevated floor slab is being placed in two parts. Once the first half of each floor is ready for concrete, approximately 273 cubic yards (250m3) are poured for that section of the floor. Then, columns are poured, along with the second half of the floor. The process of pouring the entire floor level takes from one to two weeks, with weather being a factor in the planning and pouring schedule.

Receiving more than 10 feet (three meters) of snow annually, Quebec City provides a challenging environment for construction; snow, ice and wind can have a tremendous impact on schedule and equipment.

In addition, contractors need to adhere to strict frost law requirements for tandem axle vehicles. The maximum allowable weight is 53,274 pounds (16,000kg) on the front axle and 33,069 pounds (15,500kg) on the rear axle during the thaw period. To accommodate this requirement, the pump is mounted on a twin steer extended chassis.

"Having the option to choose the twin steer chassis was a huge advantage to us in terms of schedule," says Gauthier. "It allowed us to work throughout the frost thaw period in compliance with regulations."

Special consideration also needs to be taken to keep the exposed concrete delivery line, which measures approximately 200 feet (61 meters), heated during the winter months. Otherwise, the concrete could freeze in the pipe, resulting in massive schedule delays and significant labor and materials costs. To do this, the contractor is using heat trace wire and is insulating the delivery line. Insulation is also being used on the boom pipe to prevent it from freezing.

Because the existing tower already houses a number of different tenants, extreme care has to be taken to minimize disruption during the entire construction process. The pump and placing boom solution was selected for just that reason.

The system limits the amount of concrete that would have to be poured using the traditional tower crane and bucket method, which can be messy, cumbersome, and can negatively impact schedule due to high-altitude wind speeds. The Putzmeister pumping system allows for cleaner, more efficient concrete placement. Freeing up the tower crane also allows it to be used on other areas of the job, accelerating the production rate of the construction site.

"We have gone to great lengths to minimize disruption to the tenants' day-to-day operations in the building," says Gauthier. "The pump is ideal for our use in the restrictive area and particularly for this case, when keeping the tenants and customer's property safe and clean is a number one priority."

Traditional concrete placement methods include setting up in multiple locations and moving as close to the placement area as possible. In this case, that was not an option due to the amount of obstacles and activity nearby. The solution was to set up the pump in a static location outside of the existing building with the Esser ZX 125 delivery line running through the ground floor and tied into the pin connect tower, which was placed in an opening in the center of the building. Due to the Series II detachable system, the placing boom from the truck-mounted concrete pump was quickly removed and installed on the pedestal at the top of the tower.

"With the long reach of the boom, we had no problem getting to all corners of the construction site," Gauthier adds. "The placing boom in the middle of the building has been working extremely well."

Another advantage of the detach boom arrangement is that the boom can be easily  reinstalled on the truck pump and used for more common concrete pumping projects.