How To Plan and Manage Curing for Mass Concrete Pours 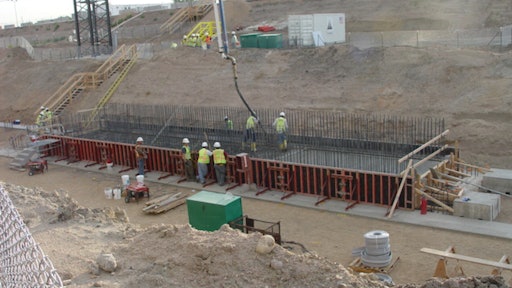 The American Concrete Institute (ACI) does not provide specific size limits to define mass concrete. ACI defines mass concrete as “any volume of concrete with dimensions large enough to require that measures be taken to cope with generation of heat from hydration of the cement and attendant volume change to minimize cracking.1 Historically, large placements where the minimum cross-sectional dimension equals or exceeds three feet are commonly designated as mass concrete. However, smaller sizes may also be designated as mass concrete depending on factors including: type and quantity of cement, volume to surface ratio of the concrete, weather conditions, concrete placing temperatures, degree of restraints to volume changes and the effect of thermal cracking on function, durability and appearance.

2) The maximum temperature difference between center and surface of placement shall not exceed 35 degrees Fahrenheit.

Limiting the internal concrete temperature to 158 degrees Fahrenheit prevents delayed ettringite formation (DEF). Ettringite is a normal product of cement hydration that forms within the first few hours after batching the concrete. Early-age high temperatures (greater than 158 degrees Fahrenheit) can prevent the normal formation of ettringite. If DEF occurs in hardened concrete with an external moisture source, internal expansion with subsequent visual displacement and cracking may occur. DEF can also increase the risk of additional deterioration due to freeze/thaw attack and reinforcement corrosion. Limiting the internal temperature during the concrete’s very early life will prevent DEF.

Factors such as type and amount of cementitious materials, concrete placing and ambient temperatures, size and volume to surface ratio of the concrete element control the temperature rise and maximum temperature in mass concrete. In general, only concrete elements where the minimum cross-sectional dimension equals or exceeds three feet have thermal concerns because smaller elements typically dissipate the generated hydration heat at a rate sufficient to limit temperatures to required levels. Thicker elements do not dissipate hydration heat at a fast enough rate and temperatures at the center of the pour can therefore build to levels that exceed specified levels.

Two methods commonly used to predict the maximum concrete temperature include an approximate “equivalent cement content” method and computer or thermal models. With the approximate method, estimate the maximum temperature by adding 16 degrees Fahrenheit for every 100 pounds of cement per cubic yard to the concrete placing temperature. For Types F and C fly ashes and slag cement (50 percent replacement) use 50 percent, 80 percent and 90 percent of the equivalent cement per cubic yard, respectively3  Essentially, this method assumes that these materials generate 50 percent, 80 percent and 90 percent of the heat as compared to cement.  [For an example, see chart.]

Concrete mixture - Limit the quantity of cement to the smallest amount possible and replace cement with slower setting supplementary cementitious materials (SCM) such as Class F fly ash and slag cement. Use cement with moderate to low heat of hydration properties. Do not use Type III or HE (high-early strength) cements and chemical accelerators. If available, use low thermal expansion aggregates such as granite, limestone or basalt. Slowing the rate of heat generation also slows the rate of strength gain. Therefore, propose a 42- or 56-day compressive strength for concrete acceptance in lieu of the standard 28-day strength.

Work with the concrete supplier to develop an economical and low-heat generating concrete. Run trial mixes in the laboratory to establish fresh and hardened concrete properties. Perform field tests by casting blocks to represent the mass concrete elements and measure internal and surface temperatures. Also, use the test blocks to evaluate the proposed concrete placing techniques and the post-cooling plan. Be sure the measured temperatures comply with the specified temperature limits. If not, revise the thermal control plan.

Post-cooling - Use insulation to control the maximum temperature difference between the center and the surface of the mass concrete. Slowing the rate of heat dissipation from the surface reduces the temperature difference and the potential for thermal cracking. Of course, reducing the cooling rate of the concrete may cause construction delays. Wet curing is risky because the thermal shock from applying cool water to hot surfaces may cause rapid cooling of the surface and cracking.

As part of the thermal plan, consider using computer-based thermal modeling to estimate the maximum concrete temperature and temperature differences. In addition, modeling can evaluate and optimize the pour size (lift or block size), placement schedules (time intervals between placements) and temperature control plan to minimize the risk of thermal cracking. Computer modeling is a quick and efficient way to evaluate the different options available for controlling temperatures and thermal cracking. In most cases, the cost of the modeling is insignificant to the potential savings from optimizing the thermal control plan.

Kim Basham is president of KB Engineering LLC, which provides engineering and scientific services to the concrete industry. Basham also teaches seminars and workshops dealing with all aspects of concrete technology, construction and troubleshooting. He can be reached via e-mail at KBasham@KBEngLLC.com.

L. J. Mott, PE, is president of GES Tech Group, Inc., which provides general mechanical, structural, civil, and forensic engineering services to a wide variety of clients and industries. Mott is an expert in advance finite element modeling, specializing in non-linear static and dynamic mechanics and transient thermodynamics. He can be reached via email at gestech@gestech.net.